Aldi's workers win a first victory for the whole sector

The German chain of discount stores Aldi belongs to one of the wealthiest families in Europe, and has registered record sales this year. This does not prevent management from saving money on the backs of the personnel. An unprecedented spontaneous strike turned into a first victory for the whole country. Aldi's staff and trade unions have obtained an extension of the special measures and compensation related to the coronavirus and, more importantly, they have won respect. 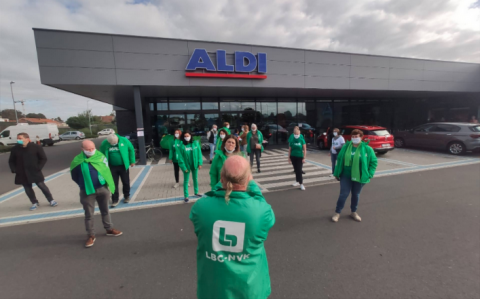 Shortage of staff has been putting pressure on Aldi's workers for a long time. Right from the start of the coronavirus crisis, they were assigned additional tasks, such as disinfecting shopping carts. Confinement and "vacations at home" resulted in a significant increase in the number of clients as compared to other years. The number of staff was not increased, however, as it is calculated on the basis of the figures for the previous year. Overtime payment was only provided for guiding clients at the entrance, and this service was generally provided by temporary workers anyway. This measure was also withdrawn prematurely. Aldi is currently experimenting with a traffic light to indicate to customers if they can enter.

During the crisis, supermarket employees were considered heroes because they ran the stores under difficult conditions and at risk to their health. They were applauded at the time, but now they seem to have been forgotten. Aldi's management claims that the pandemic is over, and is rapidly reducing small compensation payments to staff, while turnover has increased by an average of 10 % in the sector since the crisis. From the beginning of March to the beginning of May, Belgian supermarkets sold for half a billion euros more than normal. Record profits for which the staff had to work hard.

At the rate of a chronometer

Aldi is owned by the Albrecht family, one of the richest in Europe. The members of this family have built up their collective assets to a total of no less than 34 billion euros by extending their concept of discount and low cost to the working conditions of their staff. Today, an Aldi employee in Belgium earns about 12 euros per hour. For this modest salary, he has to work hard, at a pace dictated by the clock. The maximum amount of time allowed for completing one task is specified in seconds. On this basis, management determines the time to be worked per week. In practice, it is often impossible to complete the tasks imposed within the short deadlines that are given. Even the standby team is understaffed, which means that sick workers cannot be replaced.

The range of tasks has expanded considerably in recent years, the working hours, though, have not. Melissa (assumed name), an employee at an Aldi store in East Flanders, testifies: "A few years ago, Aldi introduced a new concept (ANIKO, Aldi North Instore Konzept) that is more in line with the concept of a "quality" supermarket with higher prices. Many additional duties were introduced on top of those we already had. In the past, most products were just placed on pallets, whereas now we have to put them on the shelves. The range of fresh products has also been considerably broadened, which means a big increase in the number of freshness controls we have to carry out. Stock has increased, but the warehouses are still small, so we are wasting a lot of time getting the stock out and putting it back in place. At the same time, we also have to help at the check-outs. For all these new tasks, they have hired one additional staff member per store. It's far too few. We already couldn't stand the pressure anymore before the coronavirus crisis broke out."

The workload has been steadily increasing over the past few months. However, this did not prevent Aldi's management from further developing the new concept. "They are bothering us with the new concept, the implementation of which they have considered imperative right during the corona crisis: fresh meat on the one hand, and new presentation counters filled with branded products at check-outs, on the other hand. We haven't had enough time for that since, inside the number of hours we had been allotted, we also had to carry out disinfection and rules control. In our opinion, this could have been postponed until the fall," Melissa adds.

A spontaneous strike broke out on Monday 31st of August, after the arrogant statement made by a manager at a works-council meeting in Erpe-Mere: "Let those who don't like Aldi anymore, go and apply elsewhere." Within a few hours, the strike had spread to 36 stores in the provinces of East Flanders, Antwerp and Flemish Brabant.

Staff were demanding a solution to the heavy workload, as well as an extension of overtime and financial compensation related to coronavirus. For example, Aldi already abolished the value increase to 8 euros per day (an increase of 1.05 euros) for meal vouchers in July. The strike quickly yielded a first result: On Tuesday evening, management announced that the increase in the value of meal vouchers would be extended until end September at least. For other compensations related to the coronavirus crisis (such as additional days off), no decision had been taken yet. Determination remained remarkable, though. The lack of respect for staff in such difficult times, when the company was posting record-breaking profits, left Melissa fuming: "When so much profit is made at the expense of the mental and physical health of staff, it makes sense that it should benefit the people who have been on the battlefield since March. "

This victory at Aldi's is also important for the employees in other chains of retail stores, who had often been granted similar temporary benefits for their extra efforts during the coronavirus crisis. For example, unions managed to obtain from Delhaize that the increased value of meal vouchers and higher employee discounts remain in place until the end of December, instead of the end of June as had been proposed by management.

Fierce competition has been raging for years in the retail sector. Delhaize and Carrefour have already undergone major restructuring in 2015 and 2017 respectively. Last year, the Dutch discount chain Jumbo also gained access to the Belgian market. Supermarket management is trying to recoup the cost of this price and promotions war from the employees. Low wages, flexible working hours and lack of staff are a reality throughout the sector. Supermarkets did, however, continue to make profits and pay high dividends to their shareholders. In 2018, after seven days of sustained action, the Lidl workers were able to turn the tide and impose both the recruitment of additional staff and a reduction in the hellish pace of work. This is a source of inspiration for Aldi's staff today and, who knows, for other stores in the near future.