"Colonization stole the light and the future from Congo, Rwanda and Burundi"

On 17 July, the Federal Parliament set up a commission to examine Belgium's colonial past and draw lessons for the present and the future. Nabil Boukili, MP for the PTB-PVDA, who has been fighting racism and colonialism on the ground for years, is a member of this committee and is its rapporteur. He explains to us where this commission comes from and what it's meaning is. 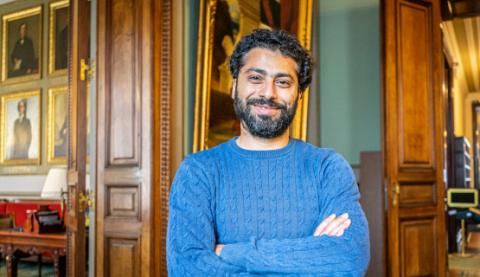 For a long time the history of the Belgian colonization in Congo, Rwanda and Burundi was a taboo subject in Belgium. Not so long ago, the 'civilizing mission' of this colonization was still taught in school. In recent years, we have seen a series on Flemish television on the subject and now there is this commission. Where does this development come from?

Nabil Boukili. This evolution is the fruit of struggles that go back to the 1980s, when the question of the colonial past was not yet unanimous within the academic world, when the first criticisms against colonialism came from outside the academic world.

Today, the pressure of the anti-colonial movement is paying off. The events that have taken place in the world in response to the murder of George Floyd and which have also resonated in our country show that part of the population is ready to mobilize on this issue... Other initiatives have been launched, such as the petition by young Noah, which collected 80,000 signatures. He denounces the existence of statues of Leopold II who was an ultra-violent colonial actor. All these elements have forced Parliament to face this story.

The existence of this commission is therefore a victory for all those organisations and individuals who have been fighting for years to shed light on Belgium's colonial past. This is a rather exceptional opportunity because Belgium is one of the few former colonial powers to have created this kind of commission.

Attacks on the statues of Leopold II are sometimes seen by some as attacks on "our traditions and history". Is there not a risk that the commission might reinforce these ideas?

Nabil Boukili. Colonization was never an initiative of the Belgian people: it's all about the quest for big profits. First for Leopold II himself and then for the Belgian big capital. Colonization came from that tiny minority of Belgians who at the same time oppressed and exploited the majority of Belgians at home. It was the same Leopold II who had Belgian workers shot and who organized a regime of terror in the Congo where hands were cut off to punish Congolese who did not bring enough rubber. The Congolese economy in the 1950s was controlled by a few large Belgian financial groups. Take the case of Union Minière: this company laid the foundations of its wealth during the colonization with the copper mines of Katanga. Even after the independence, they were able to maintain their stranglehold on these mines and thus steal tens of billions of Belgian francs. They changed their name to Umicore. It is the same company that, here in Belgium, is making children sick in the working-class district of Moretusburg, next to their factory in Hoboken (Antwerp). And whose director said only recently that families with children only had to move if they didn't want to be poisoned by his factory. The struggle for decolonisation is therefore not a struggle against the Belgian people, but against Belgian big business.

What do you see as the real stakes and objectives of this commission?

Nabil Boukili. Our first objective in this commission is to shed light on colonial crimes. Because colonization is above all a project of a unique violence in history, a destructive project of the colonized countries and peoples, be it economic, cultural or social. Daily life, sometimes involving hand cutting, forced labour, etc. under colonization was abominable for the colonized.

This Belgian colonisation of Congo, Rwanda and Burundi had consequences, the results of which can still be seen today. Torn countries, falsified culture. Everything these countries could have had as a structure to deal with their difficulties was destroyed by the settlers. Colonization brought nothing to these countries. On the contrary, the light and the future were stolen from these countries.

The primary objective that led to this savage exploitation of Congo, Rwanda and Burundi, was to seek profits for the big Belgian capital. We have to fight this idea that in colonization there was an 'exchange' or that it was a 'win-win' relationship. This myth that colonisation did more good than harm to colonised countries is dangerous and totally false. In colonization, there were winners: the royal family and the great Belgian fortunes, the big Belgian companies. I would just like to remind you that among the 23 richest families in Belgium, 11 made their fortune at least partly thanks to colonisation. And then there were the losers, the Congolese.

Should the commission also make the connection between the history of colonisation and the situation today?

Nabil Boukili. Certainly. Racism, for example, has its origins in colonization. Because in order to colonise these countries and exploit them without any hesitation, Belgian public opinion had to be convinced that this was a perfectly legitimate undertaking. And in order to justify the massacre and exploitation of these peoples, it had to be demonstrated that these 'uncivilized' peoples were inferior to us, that they did not know how to take care of themselves .

We can see the consequences in our society today. Among the Afro-descendant community, although 60 % of the people have a degree, it is one of the communities which is most affected by unemployment. This is something structural and has its origins in the prejudices that were spread during the colonial period.

But we must also draw the consequences and lessons for Belgium's foreign policy. Our relations with these countries are still tinged with the colonial spirit. Our governments take the liberty of defining who is 'democratic' and who is not. It is paternalism, as if the peoples of those countries were not capable of defending their rights and making the choices they deem good for their own country. In its conclusions, the commission should also question this neo-colonial policy.

Was there any resistance against this commission?

Nabil Boukili. Within the Parliament, there has been resistance, especially from parties such as Vlaams Belang (extreme rightist), N-VA (rightist nationalist) and MR (neoliberal).

The MR did not want the commission to deal with the economic aspect, and they wanted to compare Belgian colonisation with the practice of other colonial powers. As if that could diminish the inhumanity of colonization to the colonized...

It is ironic to see the N-VA and Vlaams Belang, Flemish separatist parties who want the end of Belgium, using the same kind of arguments as a nostalgic paternalistic Belgian party like the MR to relativize colonization. The Vlaams Belang website states that it rejects "a systematic and radical bashing of the colonial past". N-VA chairman Bart De Wever also says that colonisation must be placed in the context of the customs of the time. Which puts it into perspective...

On the other hand, the N-VA and Vlaams Belang say that Flanders has nothing to do with colonisation. But both Flemish capital and Walloon industry benefited from colonisation. In the board of directors of the Abir company, which exploited rubber for Leopold II, there were many Antwerp businessmen. Financial holding companies such as Société anversoise and Crédit anversoise were active in Congo. Even the Van Thillo family, which is very close to the N-VA and is the owner of the powerful Persgroep press group, was active in the diamond sector in the 1930s.