Four days after the start of the extraordinary European summit in Brussels, European Union leaders reached an agreement on a 'coronavirus' recovery plan. This plan is designed to address, on a European scale, the forecasted serious economic crisis. The European Union is going to launch a collective loan of 750 billion euro for the first time in its history. This could be an important step towards more solidarity between European countries, but the conditions imposed are challenging. 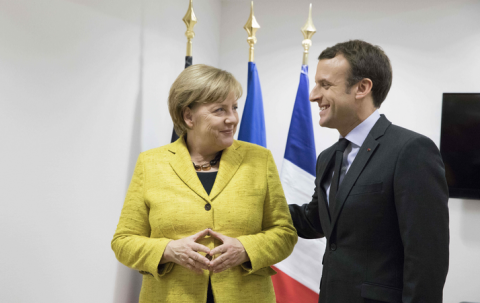 In the face of this economic and political crisis in the European Union, the European Commission is going to take out joint loans. These loans will be guaranteed by the Member States. For the first time, the Commission will be borrowing money on the financial markets to pool in a common European fund. It is also the first time that much of this money (of which 390 billion will not have to be reimbursed) will go to the countries that need it most. And finally, this is the first time that Europe will be able to establish its own tax revenue: a potential step towards a more federal Europe.

"It is all about our European project", stated Emmanuel Macron on his arrival at the Summit. The economic crisis is indeed going to severely affect European countries in the coming months. Both German Chancellor Angela Merkel and the French President have made no secret of their concern: In the absence of a strong European response, it is the very unity of the European Union that is at risk.

Moreover, the economic and social crisis is likely to further widen the already significant gap between European countries. The impact of this unparalleled event on the economy shows that, indeed, not all countries are equal. Italy, in particular, is struggling to recover. The country is on the verge of financial collapse. Gross Domestic Product (GDP) is estimated to have dropped by 10 % in Spain, while in the Netherlands, the recession is estimated at 5 %.

Finally, it is chiefly the economically stronger countries that have been able to put in place support plans. This is how, early May, more than half of the state aid had been granted to German companies.

After twelve years of austerity and a health crisis in which European solidarity is not forthcoming, an economic crisis is bound to widen the gap between countries even further if nothing is done. This realization has led Germany to support the establishment of European solidarity mechanisms that it had refused to accept so far. Indeed, in 2011, during the financial crisis, and then during the Greek crisis in 2015, Germany was firmly opposed to any European bond mechanism.

An Italian bankruptcy (the country being the third economic pillar of the euro zone) would have a disastrous impact on the whole continent. Especially on workers, but also on European multinationals. The close links existing between the industrial areas of northern Italy, that were crippled during the containment, and German industry have reinforced the commitment of the major German employers to save the internal market. The three leading employers' federations (German, Italian and French) have made an urgent call for a stronger European integration. It is thus not a sudden empathy for the people of southern Europe that has guided Merkel and Macron. In truth, they were very concerned about two issues: on the one hand, the economic impact of an Italian bankruptcy on the rest of the continent, and on the other hand the possibility that both Italians and Spanish reject the very idea of the European Union. This dynamic would jeopardise their vision of a European Union as a global economic power, capable of competing with the United States and China.

This is why Macron and Merkel have taken the initiative of a 'new generation' recovery plan of 750 billion euro. These amounts will be allocated over a period of two to three years, and will come on top of the national recovery plans that are emerging everywhere.

750 billion for the recovery in a spirit of cooperation, that's a good point, which stands in sharp contrast to the traditional European policy of austerity and competition. It is at the same time a victory over the nationalist right-wing currents that are pushing for Europe's break-up.

But the governments of the so-called "frugal" or "stingy" countries, such as the Netherlands under Liberal Prime Minister Mark Rutte, Denmark, Sweden, Austria and Finland, have waged a genuine war of attrition against these joint loans, as well as against any form of solidarity. In Belgium, the N-VA (New Flemish Alliance, right nationalist) agreed with them on the substance.

The only thing these right-wing governments want is a large market with no solidarity at all. The stingy coalition has teamed up with the German ultraconservatives to put obstacles to these 750 billion. How did they do that? By seeking to make their use subject to conditions.

Admittedly, the antisocial coalition of the stingies and ultra-conservatives was unable to establish a right of veto over the distribution of funds (which is a good thing). But it has nonetheless secured the principle of an alarm mechanism that makes it possible to suspend the granting of such funds for a period of three months. Any one country will be entitled to sound the alarm if it considers that another country is not making "good use" of the money it received. These conditions are specified in a fairly precise manner. Countries should, among other things, comply with the recommendations of the European Commission. If country A wants to obtain funds to strengthen a specific public service (health, transport,...), any country B will be able to activate the alarm mechanism.

This is a sword of Damocles hanging over the heads of all governments, especially those that would like to leave the beaten track and distance themselves from the classic neo-liberal European policies. This is bound to lead to bitter debates on the use of these funds in the future.

The war of attrition waged by frugal countries has also had a negative impact on the priorities of the Recovery Plan. At the outset, health and research had been treated as an important issue. For the first time, a genuine European health programme was about to be launched. This was essential in the midst of a pandemic. In the end, however, it has been erased completely from the Recovery Plan.

And a whole ambitious common approach has gone down the drain: Beyond common stocks of protective equipment, a common approach requires real backing to ensure accessible treatment and an efficient support to health systems. Its neglect is a real insult to the healthcare heroes, who remain on the frontline, and who have been suffering from the lack of European solidarity.

As for the public research programme, its size has been reduced by a factor of three. Both the industrial investment programme (InvestEU) and the Just Transition Fund (designed to help regions deal with climate change) are melting like snow under the sun.

The EU budget is the ugly duckling

The 750 billion euro stimulus package may be a small step towards more solidarity and less nationalism. On the other hand, the European budget negotiated in parallel represents a step backwards. It is too little, too late, with too many cuts in future investment projects and with privileges for the richest countries.

Just like any State, the European Union works with a budget that is used to pay for expenses, like the European structural funds. While the Recovery Plan is a two- to three-year plan aimed at responding without delay to the coronavirus crisis, the European budget is a longer-term plan. It is set for a period of seven years (2021-2027).

Out of all the budget proposals on the table, the leaders of the European Union have retained the lowest. Its 1074 billion euro does not even amount to 1 % of the European GDP. It does not meet the social and climatic needs of Europeans at all. Greta Thunberg deplores the European Union's lack of climate ambition. It is clear that social issues are not its priority either...

On paper, the dual transition (digital and climate) lies at the heart of the Union's objective, which in itself is positive. However, on closer inspection, it becomes clear that the main objective is to help European multinationals to become 'champions' in these areas. In other words, the European taxpayers' money will be used to subsidize large European companies in order to enable them to be the most competitive at international level. This will include using public money to pay for investments that the private sector does not want to make out of its own resources.

Privileges for the wealthy

Last but not least, the European budget even provides privileges for the wealthy countries. Monetary rewards are offered to the Netherlands and its "frugal" allies in exchange for their support. On the one hand, they will be able to keep a large percentage of customs duties on products entering the European Union through German, Dutch or Belgian ports. On the other hand, their contribution to the European budget will be reduced.

Each country normally contributes to the European budget according to its economic weight, on the basis of its gross national income. However, the economically more powerful countries have found excuses for not paying their due: between 2014 and 2020, Denmark, the Netherlands and Sweden, but also Germany and Austria, have been granted reduced annual contributions. The new European agreement significantly increases these cuts. That of the Netherlands, for that matter, has tripled, and is now close to 2 billion euro. As for Germany, is is getting a reduction of 3.6 billion per year.

In other words, the contribution to the budget by dominant countries that are granting themselves a right of control over the policies of others is relatively lower, which means that other countries have to contribute more. This is the exact opposite of the principle of structural solidarity, which holds that broader shoulders should contribute more. Such gifts to the wealthier are all the more uncalled for as the Netherlands are known for being a tax haven for multinationals. Italian companies such as Fiat or Ferrero, for example, are allowed to establish their headquarters in the Netherlands, thereby avoiding taxation in Italy. The Italian, Spanish, French and German public sectors are therefore losing billions every year.

Towards a social, mutually supportive and ecological approach

The collective loan of the Recovery Plan is a seed from which European solidarity may grow. That is, in itself, positive. The conditions attached to it are, however, jeopardizing this step forward. Above all, the European budget adopted for the longer term is moving in the opposite direction.

As an immediate step, we are proposing three concrete measures: