Fighting for safety at work: how AB InBev workers brought a multinational company to its knees

After 13 days of strike action, the workers of AB InBev have managed to bring the beer multinational to its knees and to obtain good progress in enforcing health regulations.How? A small glimpse of the ingredients of a victory. 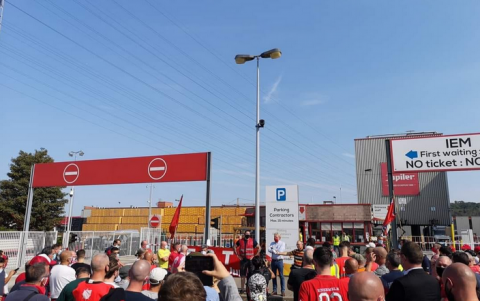 Despite the coronavirus, the AB InBev factory never stopped. Since the beginning of the pandemic, the anger of the workers has been crescendo. AB InBev made 7.4 billion euros in profits in 2019 but has not invested enough in effective means and procedures to enforce health regulations and protect workers. It has even gone so far as to try to hide the existence of a contamination outbreak at the Jupille site, near Liège in Belgium. The workers didn't let it happen... and they won.

The stages of victory

The shortcomings were already numerous: not enough masks, too little plexiglas, no possibility of being tested on demand, etc. But it was at the end of August that the vase overflowed. "On 27 and 28 August, two positive cases at Covid-19 were detected," explains José Borrego, representative of the FGTB (socialist) trade union center. The management asked these two people who they had been with, but failed to put them on temporary leave. They stayed for up to six more days." The result: 11 contaminated workers, two of whom were in a coma.

Medicine pour le Peuple (PTB-PVDA's network of health centres) decided to mobilise. "We learned that there was a source of contamination in the logistics sector of AB InBev, and we contacted the trade union delegation to offer our help," explains Amandine Linotte, of Médecine pour le Peuple. Eighty workers are tested in this way. Instead of collaborating, the management puts pressure to try to prevent this testing. For the FGTB delegation, this is the last straw. They decide to go on strike, with the following demands: the relocation of the human resources director and the director of health and safety, and the introduction of stricter rules to prevent the virus from spreading again in the company in the future.

After three days of strike action, the management organised the disinfection of the site and installed a more substantial plexiglas system. But they didn't want to hear anything about the rest. The strike continues. It was followed by a very large number of workers. The management then moved on to threats. Bailiffs distributed fines to many strikers (a trade union delegate received up to 11,000 euros in fines). They go so far as to leave these fines at the workers' homes. The girlfriend of a striker has even received a visit from a bailiff at 9 p.m. at her home. At each break, the management sends messages to the workers to urge them to return to work. To no avail.

While the workers at AB InBev had been on strike for 6 days, a member of the future government tested positive for covid. As a result, all the negotiators and the King were tested within the hour. In Jupille, the workers did not receive the same treatment. But this did not discourage the strikers, who redoubled their fighting spirit.

The Jupille workers' strike inspires and spreads out. Workers at the Leuven AB-InBev warehouse also go on strike. For two days, seven out of nine lines are at a standstill. "Frankly, we won't forget it, José Borrego declares with emotion. We will return the favour." Other warehouses also joined the movement in solidarity, for four days, at the call of the FGTB and the CSC (Christian-democratic) unions. The mobilisation is being formed not only across the language border, but also beyond the factory where it originated. The FGTB and various delegations from companies in the region went to the picket line to show their support.

In Jupille, the delegation proposed a covid procedure aimed at guaranteeing testing at the request of the workers, the organisation of quarantine and the protection of workers who have been in contact with those who have tested positive. This protocol, among other things, was being presented at the meeting between union and management after a 13-day strike.

The discussion resulted in progress. After the meeting, the workers, in a general assembly, decided to return to work. Not all their demands were accepted. However, the workers managed to get the multinational to agree to some points.

Struggle pays off, even in times of coronavirus

The achievements of this struggle are not negligible:

If there is anything to be learnt from the history of the AB InBev workers, it is the enormous solidarity movement that took place among the workers. "It wasn't management that set up the testing, it was the workers, recalls Amandine Linotte. "It is the result of workers' mobilisation. Because otherwise nothing would be done."

This mobilisation was carried out in a unions’ united front, and across the language border: solidarity between workers in the North and the South was one of the keys to success. InBev's strike showed that solidarity is possible, and that it pays. With their spirit of struggle, the workers proved that it is possible to win, even in times of coronavirus.