How the Croatians pushed back their government

In April 2017, the Croatian government published a "pension reform programme" aimed at increasing the retirement age from 65 to 67 and tightening the conditions for early retirement. This programme has been approved by Parliament. Not by the workers, however, who have forced the government to back down. Background of a victory. (photo : Ivan Blazevic, responsible for the campaign in the city of Crikvenica. D.R.) 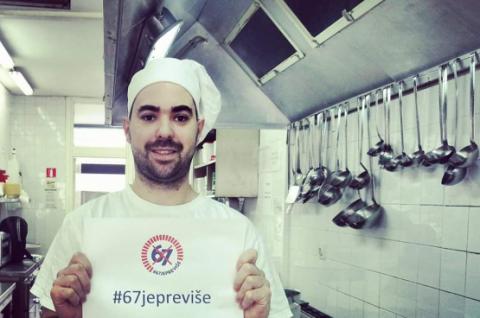 The "pension reform programme" of the Croatian government claimed that the sustainability of the pension system could only be ensured by reforming it and increasing (gradually until 2038) the retirement age from 65 to 67 on the one hand and, on the other hand, by penalising workers opting for early retirement: 0.3% less pension per month for work not performed before the age of 65. This corresponds to an 18% reduction in (an already low) pension for a worker retiring at the age of 60. Conveniently, these measures mirrored those recently "proposed" by the European Union.

From the outset, the unions have been opposed to these measures which, in their view, did not meet the main challenge, i.e. increasing the proportion of working people in relation to pensioners. Croatia has indeed undergone drastic de-industrialisation over the last few decades during which many jobs have been lost. In order to obtain its ticket to the European Union, the government has stepped up its policy of de-industrialisation by handing over shipyards to the private sector and relying on more volatile sectors in terms of jobs to keep its economy (already 25% dependent on tourism) going. The unions argue that, in order to make pension funding sustainable, new, stable and well-paid jobs must be created that are able to fund pensions.

Despite strong trade union protests, a law adopting the measures of the "Pension Reform Programme" was passed by the Croatian Parliament in 2018 and entered into force on 1 January 2019.

In response, the three largest trade union confederations jointly launched a campaign: "67 is too much!". Their two major demands : the retirement age should be brought down to 65 and the penalty for early retirement reduced from 0.3% to 0.2% less pension per month for work not performed before the age of 65.

Their strategy? To force the calling of a referendum, which is allowed by the Croatian Constitution provided a petition demanding it is signed by at least 10% of voters within a period of 15 days from the date of filing it. Between 27 April and 11 May 2019, a minimum of 373,000 signatures had to be collected. The challenge was enormous. In the end, however, more than double that number - 748,624 signatures to be exact - was collected. An average of 50,000 signatures collected every day! Ivan Blazevic, a trade unionist in the service and tourism sector, responsible for the campaign in the town of Crikvenica explains: "We took to the markets and busy streets of the city centres en masse in order to get the petitions signed. More than 4,000 trade union delegates, activists and citizens mobilized during the two intensive weeks of the campaign. It was a real race against time as we faced a media blackout during the campaign. The government even led a counter-campaign to extol the merits of its reform, and this with taxpayers' money, while our own campaign was financed with the membership fees of our members...”

The three unions did have a major asset: their experience in collecting mass signatures in order to organise referendums. As was the case in 2010 when they opposed the amendment of the Labour Law which challenged workers' rights, and in 2014 when they came up against the privatisation of motorways. Each time, the unions were able to collect the necessary number of signatures. The 2010 and 2014 referendums have never even been held. The government abandoned its neo-liberal reform plans without even using the voting booth.

After verifying the legality of the signatures, the verifying body announced that there were sufficient signatures. As with previous initiatives, the government therefore decided to amend the law without even holding a referendum. Speaker of Parliament Gordan Jandrokovic stated bitterly: "The people have the final say, but sometimes a good measure adopted by the government can be challenged by the citizens. »

The five key demands of the "67 is too much" campaign that got endorsed:

"This is the greatest victory ever achieved by trade unions and citizens" in recent years, said Mladen Novosel, President of the Union of Autonomous Trade Unions of Croatia, the largest trade union centre in the country. "Our thousands of members who took part in the action and the hundreds of thousands of citizens who signed up are a guarantee that in the future we will be able to stop any further attempts to encroach on workers' rights.”

"This is the fourth time that trade unions, together with citizens, succeeded in preventing the adoption of bad legislation through a referendum initiative. Every government needs to know that we will do it again if need be" said Kresimir Sever, President of the Independent Croatian Trade Unions.

Concluding statement by Vilim Ribic, President of the Association of Croatian Public Sector Trade Unions : "It is possible that future governments and parliaments will decide to re-impose the measures we have managed to reverse. We can tell them that in the future we will not accept measures that are disadvantageous to workers. We will keep these 748,624 signatures as a token of resistance, and we will fight to safeguard what we have gained in 2019.”