On 9 October, the national headquarters of Italy's main trade union, CGIL, was the victim of an organised attack by demonstrators who openly claimed to be fascists. Led by members of the fascist group Forza Nuova, among others, dozens of demonstrators wrecked the CGIL headquarters in Rome. 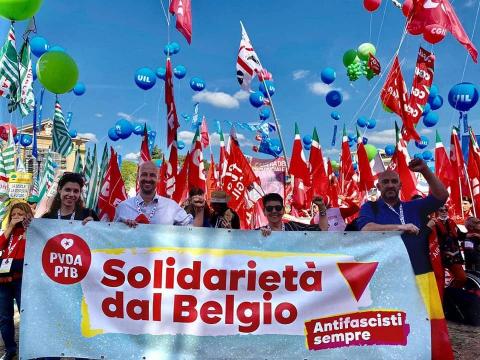 In reaction, the CGIL organised a large demonstration in Rome in a common front with the CISL and UIL unions. The slogan was clear: “Mai più fascismi!” Never again fascism.

The PTB sent a delegation, including MEP Marc Botenga and the two worker MPs Nadia Moscufo and Gaby Colebunders. They expressed the the PTB’s full international solidarity with the Italian trade unions and working class in the fight against the extreme right.

“It is time to stop the normalisation of the far right”, said Marc Botenga. “The attack on the CGIL shows the true face of the far right. And it is the face of violence. Violence, especially against trade unions. Far-right violence is not a vague scarecrow. It is real and growing all over Europe, including here. That is why it is important to be here, and to stand together against the far right.”

Marc Botenga's intervention in the European Parliament on the ransacking of the national headquarters of the CGIL trade union in Rome by a group of fascist demonstrators. “It is no coincidence that the far right attacks organisations that defend workers' rights. But to push back the far right, you have to fight the causes”, he said.