"The left needs principles, boldness, an ethical compass and a desire to learn"

Speech by Peter Mertens, Chariman of the PTB-PVDA, at ManiFiesta, 22 September 2019 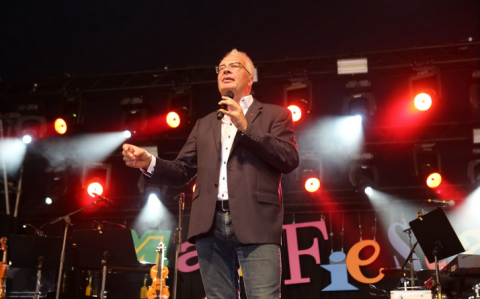 Ten years ago, we were here for the first time. Do you remember? The storm had knocked down almost all the tents the evening before our very first edition. For a short while, we thought about cancelling the whole thing. And then we said to ourselves: no, we're holding on, we're not giving up. This is who we are, the authentic left.

And look, today there are 14,000 of us. At the country's largest solidarity festival. With more than two thousand volunteers. From all over the country. From Brussels, Wallonia, Flanders, the world. In a language that unites us. The language of solidarity.

Little Pia is a nine-month-old baby, and she has a fatal muscle disease. The drug that could help her can only be obtained in the United States, and it is absolutely unaffordable: 1.9 million euros for a single injection. The stock market or your life. Or rather: the stock market, or your child's life. It is simply criminal.

Would the producer of the drug, Novartis, be in financial difficulty? Not at all. Novartis is anything but a company in difficulty. Novartis is doing very, very well. Last year, the multinational pharmaceutical company made a profit of 11.5 billion euros.

Perhaps the drug Pia needs is so expensive because Novartis has had to invest a lot of money in research and development for years? Absolutely not. It is not Novartis that is at the origin of this scientific advance, but university research centres. With the taxpayer's money, that is. It was only last year that Novartis bought the patent. To get a lot of money out of it today. 1.9 million euros for a single injection. This is pure madness.

In our country, many politicians tweet their petty opinions on everything and anything. But about the scandalous prices demanded by the pharmaceutical mafia, they do not utter a word. They keep silent on the commodification and looting of our health care. Worse still: they organize it.

Health care is not about making money. The purpose of health care is to enable human beings to live their lives as human beings. It is not money that must be central, but people. This is one of the fundamental reasons why Medicine for the People was created. Against the dominant current.

It takes fighters to wrest change. Social justice fighters. Rebels with a heart who dare to fight Big Pharma instead of bowing before its lobby. People like Dr Dirk Van Duppen [of Medicine for People], a rebel with a big heart for his patients, who has been campaigning for years for affordable medicines.

For years on end, we have been taught that man is wolf to man. That civilization is but a thin layer of varnish. That the deep nature of the human being is evil and selfish.

That's bullshit. "It is not the human being who is the problem," explains Dutch author Rutger Bregman in his new book. And that's right. It's capitalism that is the problem. If he cooperates with his fellow human beings, man is capable of great things. In his book 'The Super Collaborator', Dr Dirk Van Duppen comes to exactly the same conclusion, based on the most recent scientific advances.

Look at the impressive wave of solidarity for Pia. More than a million text messages for crowdfunding to save her life. These are not people who are wolves to their fellow men. They are human beings for their fellow human beings. And this is what all right-wing parties and the prophets of capitalism are so afraid of: solidarity. It is also the very essence of this festival. (…)

The PTB-PVDA is more necessary than ever.

At more than 100 days after the elections, it seems that the traditional political parties have learned nothing from their electoral defeat on May 26. Absolutely nothing. They suffered their biggest electoral defeat in post-war history, but they continue as if nothing had happened. (…)

Traditional parties were sanctioned on May 26 because people are fed up. Fed up with right-wing government policy. With endless savings on everything that is essential in a society. With poverty spreading more and more, while extreme wealth is increasing. With waiting lists for social housing or health care. And with the stunning arrogance of a political caste that lives outside reality and gets richer by profiteering wherever it can and as never before.

People want a social and fair policy. That was the signal of May 26. The political caste may have forgotten it. We don't. We will continue to make this signal heard, against the tide.

I remember perfectly well how, two years ago, here in this same main stage at ManiFiesta, I launched the proposal for a minimum pension of 1,500 euros net.

It received the most adverse reactions: “Impossible! Unaffordable! Populist!” But a minimum pension of 1,500 euros is not populism. It is popular.

It became even the main theme of the elections. But the right-wing parties have long since forgotten that. And if they have not forgotten it, it is because we are putting it on the political agenda.

We said to ourselves: we're going to aim for 25,000 signatures, to start with. But in one week, more than 45,000 people have already signed the proposed citizens' initiative law. 45,000 people in one week.

If there is so much response, it is because our pensions are much too low.

Take Lisette, for example. She has worked for 45 years. First with her husband in their grocery store, then in elder care. Lisette now receives a miserable pension of 570 euros per month. This is not normal, really not normal.

Take Judith. She started working at the age of 14. She was still a child when she started in a textile factory. Until this factory went bankrupt. Then she worked as a cleaner. Today, she receives a pension of 1250 euros per month. This is not normal. It really isn't.

The right-wing parties are not particularly happy with our campaign. I wonder if they sometimes meet people like Lisette or Judith. And what they tell them, these ministers who, after barely fifteen years career, receive a pension of 4,000 euros, when we have to make do with the lowest pensions in Western Europe. (…)

Finally, I would like to tell you one more story. A true story. Three days before the May 26 elections, Nethys, the subsidiary of the Walloon intermunicipal company Publifin, held a secret meeting with its management.

And what did they decide, three days before the elections? The management decided to sell its telecommunications company Voo to a private American investor. Pure privatization. At a time when new technologies are so essential to restore oxygen to the economy and society.

The management decided to sell Elicio as well. Elicio, a company specializing in renewable energy, with wind turbines throughout the country and off the coast. While publicly owned renewable energy is such a crucial lever in the fight against global warming!

This is a total hold-up.

It is this kind of practice that we blame the leaders of the Socialist Party for. This is one of the main reasons why we broke off negotiations with them for a new Walloon government.

We do not accept that crucial sectors are being sold off to the private sector. Like thieves in the night. Three days before the elections.

We do not want privatisations, we want public investment.

For ten years, traditional parties in Europe have told us that austerity will bring new life to the economy. In reality, today we are on the eve of a new recession.

This is enough. As a society, we have to take control again. Dare to invest instead of selling everything to the hunters for maximum profit. Invest in public research, invest in health care affordable to all, invest in quality education where every child counts, invest in publicly managed renewable energy, invest in sustainable jobs.

That is what we need. Instead of letting ourselves be divided by racism or separatism, we need to work together on an ambitious plan. Public transport. Public housing. Renewable energy. Education. Health care. Pensions. That is where the future lies.