Let's help the big fortunes get out of their lockdown...

Who has to pay for this crisis? The heroes of everyday life, the healthcare workers, the workers in the distribution, at the post office... or the richest? In our country, the PTB-PVDA started the debate with the proposal of a "corona tax", but the issue is of global importance. French economists feel that a wealth tax is justified in times of crisis. It has already been applied. 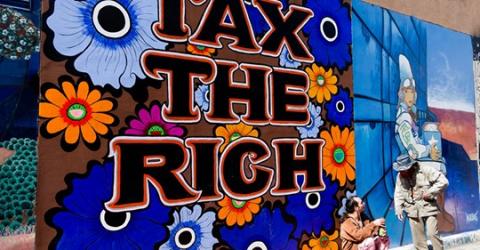 The government deficit is increasing. According to the National Bank of Belgium, every week of lockdown in our country accounts for an economic loss of 4 billion euros. Even before the outbreak of the pandemic, the public deficit was estimated at 13 billion euros. That has now risen to 24 billion. And the end is not nearly in sight. The fundamental question is: who is going to pay the bill?

After the financial crisis of 2008, the governments presented us with the bill. And now what? It looks like we're getting more of the same. The statements of Walloon Prime Minister Elio Di Rupo, for example, leave no room for doubt: "Everyone will have to make an effort and agree to surrender part of his salary”. (1)

Luckily, that's not a done deal. More and more voices are calling for a wealth tax, so that the super-rich pay the bill. As PTB-PVDA chairman Peter Mertens puts it forcefully: "Every evening we applaud the health care personnel and the countless heroes who make our society run day after day. And these corona heroes are supposed to pay for the crisis? No way! There is an alternative: an exceptional corona tax on the major assets. A solidarity contribution of 5% on property in excess of 3 million euros. More than enough to replenish the treasury with 15 billion euros. It's a matter of political will."

This desire to tax big capital extends far beyond the borders. The same discussion is taking place elsewhere. Many left-wing parties and social movements are calling for an exceptional tax on large assets, or an exceptional contribution on company profits. In short, a long-standing demand for fiscal justice.

"In 1918, all profits made by corporations above and beyond an 8 percent rate of return on their capital were deemed abnormal, and abnormal profits were taxed at progressive rates of up to 80 percent. Similar taxes on excessive profits were applied during World War II and the Korean War." This observation does not come from the PTB-PVDA's studies department, but from two French economists who have moved to the United States and are working at the prestigious University of Berkeley: Gabriel Zucman and Emmanuel Saez. In a March 30th column in the New York Times, these kindred spirits of Thomas Piketty call for the corona crisis to be paid for by the rich and not by the working classes. (2)

"These taxes all had one goal – making sure that no one could benefit outrageously from a situation in which the masses suffered." The economists Gabriel Zucman and Emmanuel Saez thus describe how, whenever a crisis occurred, governments reacted by imposing an exceptional wealth tax.

For a European wealth tax

The two economists are also proposing a European wealth tax in the current crisis. This proposal is fully in line with what they propose in their essay The Triumph of Injustice. Wealth, Tax Evasion and Democracy, which was published in the United States at the end of last year. The book looks back at the long tradition of wealth taxation in the United States. Saez and Zucman elaborate on the example of post-war Germany (1945): "In hindsight, Germany followed the best path. Instead of inflating its debt away, (...) Germany put in place progressive wealth taxes. These taxes, which applied to net wealth (all assets net of debts), were time-limited, and highly progressive, paved the way for the German post-war economic miracle. We would be wise to follow the example Germany set after WWII. This is why we propose the creation of a progressive, time-limited, European-wide progressive wealth tax assessed on the net worth of the top 1% richest individuals." (3)

A wealth tax has never been so close

As PTB-PVDA Member of the European Parliament Marc Botenga argues, a wealth tax is necessary to finance both the reconstruction and a new investment bank. "It's a means to make the richest really contribute. The 1% richest own about 20 to 25% of total wealth in France, Germany, or Spain. A wealth tax for the richest Europeans would generate tax revenue without affecting the working class' purse".

Whether it is the corona tax of the PTB-PVDA, or the proposals of left-wing parties such as Potere al Popolo or Rifondazione in Italy, or that of the KPÖ Steiermark (the local communist party) in Austria... the call for an exceptional wealth tax is ubiquitous. So a tax on large assets is not a utopia after all? Well no, more than ever it comes into sight, especially when we see the speed at which today, in a crisis that is shaking the world, liberal dogmas are being shattered.