“Listen to the little tailor Brucker, laughing at Breendonk's executioner”

Speech by Peter Mertens, chairman of the PTB-PVDA, at the commemoration of the 75th anniversary of the victory over fascism, 8 May 2020, Breendonk 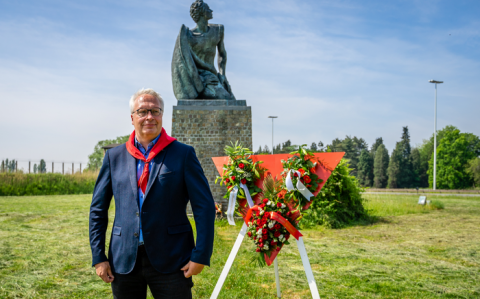 In the second half of June 1944, Arnold Brucker arrived at the Breendonk concentration camp. Among other things, he has to take care of the coffins. Fernand Wyss, a Flemish Waffen-SS, shows Brucker a coffin and says: "It's exactly your size." "It's true”, Brucker says, "but we're exactly the same size, don't forget it”.

These words are taken from the book on Breendonk by Jos Vander Velpen (in Dutch).

Fernand Wyss is Breendonk's executioner. He's in his 20s, square chin, a tough guy. He's a fighter from Deurne, who received SS training in Germany. A fanatical Nazi. A man who makes prisoners plant their own execution post. Not a German. He is Flemish. "Our people come first", you know...

Arnold Brucker, he's a tailor. "We're exactly the same size”, he told Breendonk's executioner, even though he's only a small prisoner. For those words he could have been beaten to death. But Arnold Brucker expresses them. As an act of resistance. And it gives hope to the prisoners in the camp. Brucker versus Wyss. The Jewish tailor versus the fanatical street brawler.

Seventy-five years ago, on May 8, 1945, the troops of the Soviet Red Army and those of Britain, France and the United States put an end to the largest planned and mechanized genocide in world history.

Before the coffins that Arnold Brucker was to build, there had been an election. Elections for which the great leader had all the media space. An election full of false promises. Elections half won by the NSDAP, completely lost by gullible people.

The conversion of simple Flemings and Walloons into Waffen-SS, camp executioners and soldiers of the Eastern Front had been preceded by great promises. VNV, Verdinaso, Rex [fascist organizations at the time in Belgium]. They promised that the poverty, hunger and misery of the little people would end if Judeo-Marxism was defeated. If Jews and Marxists disappeared, it would be paradise on earth.

But there was no heaven. There was terror. And the twelve years of Nazi terror killed at least 55 million people. Millions of Jews were murdered by racial madness, racism. Hundreds of thousands of communists, partisans, trade unionists, Roma, Sinti and dissidents have been murdered. And 25 million civilians and soldiers of the Soviet Union were killed as a result of anti-communism. The majority of them, some 16 to 18 million Soviet citizens, did not die in combat, but were killed in an atrocious manner in occupied territory.

Back to Breendonk. "The SS tie her handcuffs to a rope and pull it up with a pulley so that only the tips of her toes touch the ground. It's raining whiplashes. Mira screams, but doesn't speak”, writes Vander Velpen. "The SS are pulling on the rope until Mira's body hangs. All her weight is on her wrists. The blood is running down her neck. For a moment, she faints. When she regains consciousness, it all begins again."

Mira, one of the few women in Breendonk. Mira is in the resistance. She works for the Red Orchestra.

Mira's torture began with words. Through speeches by politicians who stigmatized population groups. Who targeted Jews, just as their descendants now target Muslims. It all started with tribunes of costumed fascists who legitimized violence. To those they claimed to be inferior. To those who thought otherwise. To trade unionists, Marxists and socialists. It all started with money. A lot of money that came from big industrialists like Krupp and Thyssen who wanted to fight the red peril.

Words. They're important. That's why we remember. Mira tells us: resistance begins by not accepting. By refusing normalization. By questioning. This is where the resistance begins. Mira's. Everybody else's. That of the more than 5,000 communists in our country who were deported - more than 2,000 of them did not return. That of the 35,000 armed partisans and popular militias recognized as armed resistance fighters after the war. They paid the highest price. For the freedom of us all. Mira is the red flower in the song Bella Ciao: "È questo il fiore del partigiano, morto per la libertà."

On 8 May 1945, the Gestapo terror, the torture, the humiliations and the deportation without return came to an end. "We will make the day rise. Let's have fun! Love is ours!", wrote the French communist writer Paul Vaillant-Couturier.

Ordinary boys like tailor Arnold Brucker, ordinary girls like the secretary Mira defeated fascism. The partisans. The resistance fighters. The young people, who have stood up throughout Europe against the occupying forces. The soldiers of the Red Army. The Canadians, the British, the French, the Americans.

Ordinary boys and girls. They defeated fascism. If together we can defeat fascism, together we can create another world. What seemed impossible before the war, they brought it up by the resistance. In our country, social security would have been impossible to obtain without the role of the Resistance during the war. The 1948 Universal Declaration of Human Rights was born out of the victory over fascism. On 8 May 1945, the wind blew in the sails of the decolonization movements in Indonesia, Syria, Jordan, the Philippines, India, Pakistan, Burma, Sri Lanka, Palestine and many other countries. The victory over fascism unmasked "biological racism" as a criminal doctrine of white superiority leading to violence and oppression.

This is the spirit of May 8, 1945. Today, this seems to be a matter of course. But that is not self-evident. And that will not be maintained if we do not continue to fight.

Fascism and barbarism are preceded by words. Words from presentable people in tailored suits.

Fascism and barbarism are preceded by silence. The silence of people who have closed their eyes for far too long.

Resistance and liberation are preceded by the refusal to accept, to look away and to be silent.

Listen to the little tailor Brucker, laughing at Breendonk's hangman.

He warns us and says: