After having worked their entire careers, pensioners are entitled to a decent pension. It is a matter of justice, respect and fair distribution. While politicians are drawing EUR 4,250 pensions, Belgian pensions are among the lowest in Western Europe. With average pensions ranging from EUR 1,244 for men to EUR 989 for women, retired workers cannot even afford a retirement home, let alone enjoy their retirement. 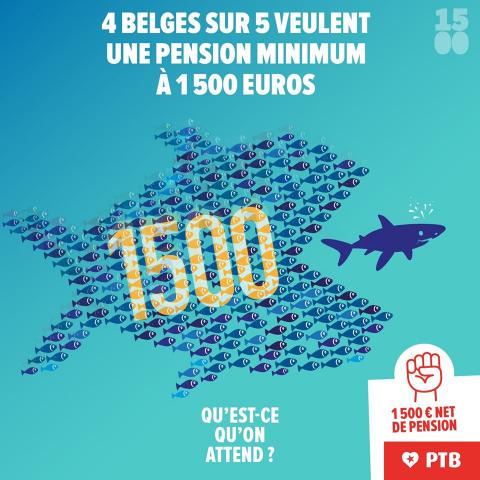 It is high time we reinforced our pension rights. In spite of all their electoral promises, the governing parties are refusing to heed the call. This is why, in accordance with the new citizens’ initiative act, and together with thousands of citizens in Flanders, Wallonia and Brussels, the Workers' Party of Belgiium (PTB-PVDA) is going to table a bill for a minimum retirement pension of EUR 1,500 net.

Why a pensions campaign?

This is an urgent matter. One in every five senior citizens lives in poverty. Belgium’s pensions are among the lowest in Western Europe. And the government, following the guidelines of the European Union, is continuing its attacks on retirement pensions. The theme is very much alive. The demand for a EUR 1,500 net retirement pension is supported by 8 citizens out of 10, both in Flanders and Wallonia, by young and old alike. A campaign waged on both sides of the language boundary in support of a common demand contributes to opposing separatism and preventing the scission of the social security system. The pension issue opens up a wide range of possibilities for a debate on injustice and inequality in our society. A decent pension for all is economically sustainable if we make the 1% pay and if we invest in society. It is just a matter of political choice.

What is this citizens’ initiative act about?

Since May 2018, all citizens have a right to present a bill. The law stipulates that the House must hear those tabling the bill, provided it collects 25,000 signatures. Our target is 100,000 signatures at least, both on paper and online. We are linking the campaign on the ground to the work carried out by our parliamentarians, and showing the population’s enthusiasm for our demand.

Leading a campaign to victory

With this campaign we are determined to win a victory. Just as when we won the campaign against the “Turtel tax” in Flanders (additional taxation on each consumer's energy bill), or like the US campaign for a minimum wage of $15 was won. People will be enthusiastic if the campaign is attractive, the commitment tangible, and provided they deem the matter important…. only then will they be keen to participate.

As has been the case in the past two electoral campaigns, our campaign is focused on social and economic issues that are of great concern to the people, that have a strong anti-establishment dimension, that will allow us to open the debate on our class-based analysis of capitalist society, that will allow us to confront and unmask the traditional parties. We are in a position to motivate people because ours is a campaign aimed at winning a victory, a campaign with a clear goal for which people want to mobilize. This is the essence of our work as a party of active members: we rely on the mobilization of the people around us, just as we did during the electoral campaign: involving all core group members, involving advisory members and finding as many new collaborators as possible – in both the local community and the workplace.

How can we win?

Tabling the citizens’ initiative bill means that the issue has to be discussed in Parliament. In doing so, we are linking the campaign on the ground to the work carried out by our parliamentarians. This, however, will not be the end of the matter. The EUR 1,500 net minimum retirement pension will not materialize automatically. Attaining it is going to require a struggle. We will have to develop our struggle into a mass movement: the 100,000 signatories (and more!) behind the citizens’ initiative bill, the unions, civil society (social organizations, local organizations, etc.) all together. Let us not forget that universal suffrage, the ban on child labour, the eight-hour day, were not won by a party in Parliament putting them on the agenda, but that they have been made possible by the formidable struggles waged both in the workplace and on the street.