"Mobilizing for the climate means aiming for system change"

Contribution to the PCP Conference, Palmela, 13 September 2019 by Jos D'Haese, head of the PTB-PVDA group in the Flemish Parliament. 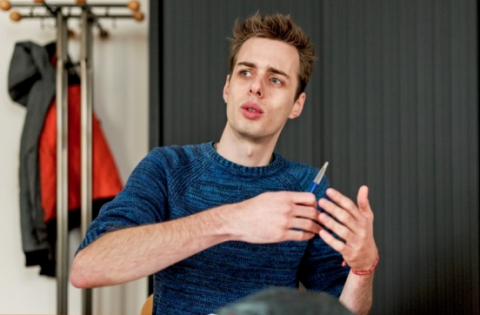 On December 29, 2018 two Belgian girls launched a call for a school students’ strike in defense of the climate. They were angered by our government’s lack of climate policy. And inspired by the example of Swedish sixteen-year-old Greta Thunberg, who had started a similar strike in her country. Nobody expected a big turnout; the girls themselves hoped for a few dozens of protesters. The most important thing was to give the signal that they cared.

But two weeks later, the country was stunned as a least three thousand school kids marched through the streets of Brussels in an unauthorized but enthusiastic demonstration. The following week, 12,500 took to the streets. By January 24, thirty-five thousand school kids marched, demanding an ambitious climate policy. They continued for 22 weeks, until the elections on May 26th. On March 15th, the youngsters organized the first ever climate strike in collaboration with the unions.

Just one month before the movement started, this whole scenario was entirely unpredictable. Back in December, the headlines were dominated by the far right, as Belgium’s government collapsed in a crisis over the signing of a United Nations pact on migration. With elections called for May 26, we were expecting a campaign revolving around migration, national security, and nationalism. With these massive mobilizations, the students of the climate movement managed to change that perspective. Climate became one of the top issues in the elections, together with social policy.

This has been an historical movement. And by the way: the odds are high that it will continue in the next months. It has been the largest movement of secondary school pupils in at least 25 years in Belgium. En it didn’t stop with the secondary school students. First the high school students joined them, then their teachers en in the end the trade unions. The Belgian example joined Greta Thunberg and others' initiatives to inspire hundreds of thousands more in the rest of Europe and the world to come out and let their voice be heard. It has been incredible to see how much these young people have learned in a few months, by organizing themselves and fighting for what they believe in. They are the leaders of the social movements of the future.

This movement challenges the way our economy is being ran, the way our political system works. Let me quote Greta Thunberg, who started the whole movement. This is what she told the European Commission: “Once you have done your homework you realize that we need new politics. We need new economics where everything is based on a rapidly declining and extremely limited global carbon budget. But that is not enough. We need a whole new way of thinking. The political system that you have created is all about competition. You cheat when you can because all that matters is to win, to get power. That must come to an end. We must stop competing with each other. We need to cooperate and work together and share the resources of the planet in a fair way.”

But the climate movement has a weak point too. It is represented in politics by green parties who promote a punitive ecology. They have a focus on individual responsibility and green taxes. Working people therefore get the impression that they will have to pay for the climate crisis, as they have paid for the economic crisis of 2008 and those before. That is why the cooperation between the climate movement and the trade unions is so important. Together, they can urge for an ambitious and socially just ecological transition. ‘Climate justice now’, is one of the most popular slogans in the climate demonstrations.

But that is also why it is so important that the forces of the genuine Left embrace the climate issue.

First of all, because the climate matters. If our governments don’t act now, nothing will remain unchanged. We can see the consequences of global warming with one degree everywhere. Imagine what it will look like with 3, 4 or 5 degrees. We have to stop climate change and therefore, we have to support the climate movement in every way we can.

But second: it is our duty to orient the movement in the direction of social justice and to link it with the working people. It is up to us to clarify that in order to save the climate, we have to change the system.

Because this is not about CO2. This is all about capitalism. As Naomi Klein says it: “Our economy is at war with many forms of life on earth, including human life. What the climate needs to avoid collapse is a contraction in humanity’s use of resources; what our economic model demands to avoid collapse is unfettered expansion. Only one of these sets of rules can be changed, and it’s not the laws of nature….”. Our economic system is at war with life on earth.

There are people responsible for the climate crisis: the ones owning the means of production, those who decide the direction of our economy. And there are people who suffer the consequences: the working people who don’t have the means to adapt. As they say in the unions: there are no jobs on a dead planet. The rich and wealthy will have no problem at all adapting to the changing climate. It will be the working class that will suffer from the consequences of a heating atmosphere.

For a few years now, we have integrated the struggle against climate change in the work of our party. That means in the first place that we have worked hard to produce a very ambitious but also detailed climate program, based on three axes:

But we don’t stop after having made the analysis and written a program. Our party, and especially our youth movement, is supporting the climate movement very concretely in different ways.

By doing so, our youth movement has grown significantly. The number of members increased sixfold. It is still a challenge to organize all those people, but the potential is huge. As I already said: the students who are organizing the marches today, are the leaders of the social movements of tomorrow.

With the Workers' Party of Belgium, we believe that the struggle against climate change should be at the heart of our political strategy. We have to preserve this planet for the next generations and make clear that saving the climate means changing the system.