Throughout the European Union, national governments are attacking the most solidarity-based pension systems. A coordinated attack from the European institutions. A quick look at Spain, France and Germany. 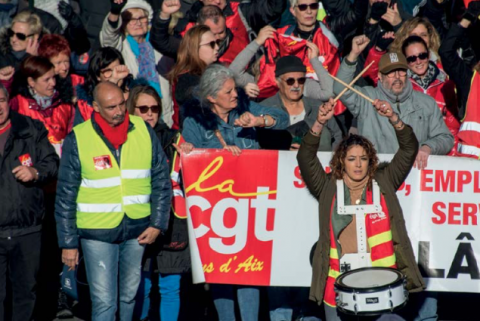 Pensions? For PTB-PVDA member of the European Parliament Marc Botenga, “it is a European struggle. The reforms that national governments are trying to impose all over Europe, are being coordinated here, within the European institutions. Austerity, engraved in the foundation stone of the European treaties, has an impact on pensions. It is no coincidence that the measures are often similar. In Germany, there is a form of points-based pension. Macron wants to introduce it in France. In Belgium, the government tried to introduce it, but the workers forced it back. In Spain, the system is slightly different, but the amount of the retirement pension is also made dependent on an external factor, such as the evolution of life expectancy: the longer you live, the less pension you get...". Let's have a look at these three countries.

Last December, the neo-liberal government unveiled the reform that workers were fearing. This reform lowers pension amounts by switching to a points-based system, and raises the retirement age by two years.

Such reform is not well received by the population: a large majority of the people are supporting the strike movement that started at the beginning of December. With one motto: the complete withdrawal of the reform. A struggle has begun between the government and employers on the one hand, the trade unions, yellow jackets, left-wing parties and citizens' associations on the other hand.

A pensioner there earns 970 euros on average. Trade unions and pensioners' associations are demanding a minimum pension of 1,080 euros.

The current system is similar to ours, in Belgium: it is a pay-as-you-go system. However, recent governments have attempted to impose a system similar to the points system. In the face of the street mobilization for dignified and fair pensions that started…. two years ago (!), the new system has not been adopted.

The legal age of retirement is 65 there. However, just like in many other countries, lowering the retirement age is on the agenda of the traditional (and far-right) parties...

The Liberals often praise the "German model" but keep quiet about its catastrophic consequences for workers. Such as the fact that almost 17% of pensioners are living below the poverty line. And that if this goes on, more than 21% of them will be living below the poverty line some twenty years from now. The idea of a universal pension is gaining ground in the Christian Social Democratic coalition. However, the problem, as pointed out by the left party Die Linke, is that 1.4 million pensioners would not be eligible for this minimum. It should be noted that German pensioners are already subject to a points system, which explains the poverty in which many people are living …

Apart from the question of clearly insufficient amounts, the question of age also makes workers angry. The Bank of Germany has published a study advocating a later retirement age. From the present 67, the age upto which workers should work ought to be increased to 69. And even 70 or 72 for some... Reply from IG Metall, the country's largest union: according to a survey carried out by the union, 90 percent of workers think they will not even be able to work until 67. IG Metall has come up with an alternative plan for decent pensions. In the meantime, workers' organisations remain vigilant...

Marc Botenga was present at demonstrations in Spain and France: "There is a determination to privatise pensions on a European scale. This is the American model that Europe intends to generalise. However, we see that speculators who are playing with pension funds on the stock market are leaving retired workers without a single dollar... For example CalPERS, a large pension fund that manages the pensions of 1.9 million Californian civil servants: it has lost 30% on the stock market in one year. If all pensioners were to claim their pensions today, only 70% of them would see the colour of their money. The others? Nothing. In France, more than 200 billion is left to the private market so our pensions may be used to play the stock market. Do we want that? For our pension to be a lottery, a financial product like any other with which a few speculators are going to play Russian roulette? »

A "lottery" pension system where workers’ pensions are no longer calculated in euros but in points. The value of the point depends on external factors. This value, that will be converted into euros, will be known to the future pensioner only just before retirement.

Through this mechanism, the government seeks to automatically lengthen our careers or lower the amount of our pension, based on life expectancy or the budgetary situation.

Solidarity system where active workers pay for retired workers while acquiring rights for their future pension.