Peter Mertens to hand over presidency at PTB congress

On 5 December, the Workers’ Party of Belgium (PTB-PVDA) will elect its new president at its statutory congress. Peter Mertens announces that he will not stand for re-election and will pass the torch. Peter Mertens has presided over the Marxist party for thirteen years, and has been the main architect of the party's renewal. From a small party, the PTB-PVDA has become a major political player in the whole country. 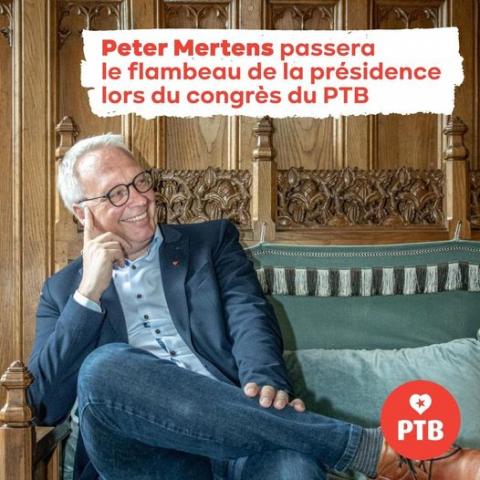 “I'm not leaving the ship, of course,” says Peter Mertens with a smile. “But it is time for another captain to take the helm. I want to take the time to focus on strategic issues and the future development of the party.”

Under the leadership of Peter Mertens, the party of the ‘genuine left’ has grown from 80 branches and 800 members to 400 branches and 24,000 members. The party defines itself as the ‘party of the working class’. “If you have a picketline, you have nine chances out of ten of running into a PTB member," a business daily recently noted. The party has an increasing influence on the social struggles in Belgium and acts as a driving force on the left, producing strong dossiers on various subjects. In 2018, the party won 169 local mandates and the following year it won 43 seats in the country's various parliaments.

The PTB started its renewal movement in 2004, after disastrous election results the year before. At the 2008 Renewal Congress, Peter Mertens was elected party president for the first time. His mandate will be renewed at the 2015 Solidarity Congress.

In addition to his task as president, Peter Mertens is also known as an author. In 2012, his book 'How Dare They' topped the non-fiction sales charts. It became the second best-selling political book of all time in our country. It was followed by 'In the land of the profiteers' (2016) and 'They have forgotten us' (2020), which has since been translated into seven languages.

In the PTB, the election of a new National Council, the highest governing body of the party, and a new president takes place every five years, in a statutory congress. At the closing session of the current Unity Congress, on Sunday 5 December, congress participants will elect a new president.

“In an often stormy political landscape, we have built a stable and solid party that has grown strongly in a short period of time”, says Peter Mertens. “I am very happy that a new generation of Marxists will be part of the National Council, with many young people and more workers than ever. We have a strong unity around our socialist project, and also a concrete unity on the ground, in the whole country. When I go to Verviers [in the French-speaking part of Belgium, while Peter Mertens hails from Dutch-speaking Antwerp, editor’s note], I go to a PTB-PVDA section. I am not a visitor there, I am at home. The new president will be above all a Marxist and an internationalist. He or she will be able, together with a strong team, to move forward on the foundations we have laid. I have every confidence that we will be fine.”