Pressure to make the vaccine a public commodity is growing

There is no longer any doubt about the fact that we are dependent on a handful of multinational pharmaceutical companies as far as the Covid-19 vaccine is concerned. Calls to break their monopoly are multiplying. Even Gwendolyn Rutten, former chairperson of the Open Vld (Flemish liberal party), is now turning to Twitter to support our plea to make the vaccine a public good," says Sofie Merckx, PTB-PVDA MP. This comes to prove that things will move when pressure is exerted." 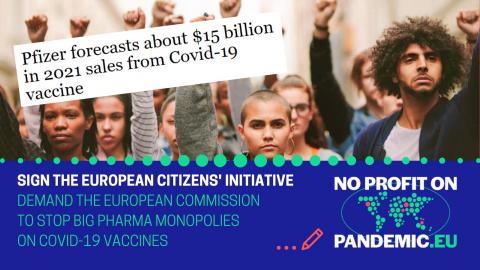 According to the PTB-PVDA, both the federal government and the European Commission can and must intervene in order for the patents held by pharmaceutical companies to be lifted. This is essential to be able to meet the demand for vaccines, not only here at home, but also in the rest of the world," says Merckx. Health must come before profit.

The PTB-PVDA is also putting its proposal to use the system of binding licences back on the table both at Federal Parliament and European Parliament levels.

This makes sense, since research and the development of the vaccine have been financed through public funds," says Merckx. Pfizer/BioNtech and AstraZeneca alone have been granted more than $4 billion in government funding."

“We are not the only ones calling the patents to be lifted," she adds. “More and more experts and organizations are moving in the same direction."

Marc Botenga, PTB-PVDA MP in the European Parliament, reminds of the existence of the European Citizens' Initiative "No profit on pandemic", that has already collected nearly 50,000 signatures.

As early as last April, the PTB-PVDA was the only party to submit to the House a proposal to lift patents on the basis of the compulsory licences system," explains Sofie Merckx. “At the time, our proposal was rejected. Now we can feel that the lines are shifting. I am pleased to see that, even from the opposition bench, the PTB-PVDA is managing to influence this fundamental debate. Today, the time has come for action."