"Prices must come down, Engie must pay" : the PTB-PVDA launches the revolt of the angry caps

The PTB-PVDA launches "the revolt of the angry caps", a call to lower energy prices and make Engie pay. The left-wing party is organizing the Fridays of Rage, a weekly appointment with local actions in different cities and towns of the country, to push the government to act. 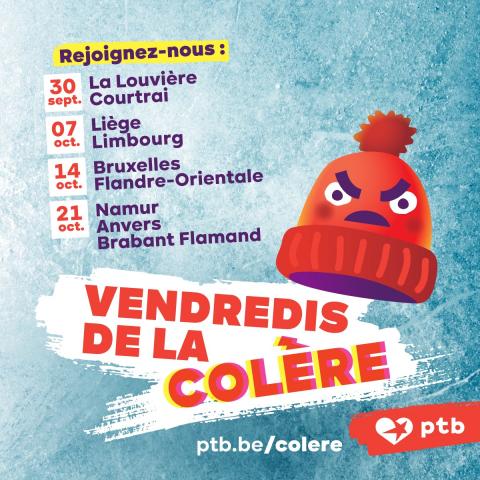 "The caps are a symbol of the current crisis, of the government that protects the energy multinationals and leaves the population in the cold," explains Peter Mertens, MP and secretary general of the PTB-PVDA. This is THE discussion that has been going on in every household for the past few days: do we turn on the heating or not? The cold weather is coming back, but for more and more people, putting on the heating means to go broke. This can't go on. We call on people to sign and widely distribute our appeal at www.ptb.be/energie.”

To put pressure on the government, the left party is organizing the Fridays of Rage, starting with actions in La Louvière and Kortrijk. The actions will then go up a notch with meetings in Liège, Seraing and Genk on October 7, Brussels and Ghent on October 14 and Namur and Antwerp on October 21.

The PTB focuses on three main measures in its appeal: the decrease and the freezing of prices, the taxation of the mega-profits made in particular by Engie-Electrabel and the takeover of the energy sector by the community. These three measures form the basis of a plan to respond to the current social emergency and the challenges posed by this energy crisis.

1. To lower and freeze prices

"How can one justify selling for 200, 300 euros per megawatt-hour, or even more, electricity that costs about 35 euros per megawatt-hour to produce... Yet this is how Engie-Electrabel gets rich without doing anything, while hundreds of thousands of families risk falling into poverty. This is unacceptable. The state can and must intervene urgently to lower and freeze prices," defends Peter Mertens.

The PTB proposes to freeze electricity prices on the basis of real production costs [1], to introduce a maximum ceiling for gas [2] and thus bring the price of energy back to the level of October 2021. We ensure that the average gas and electricity bill is never more than 190 euros per month for a family and 113 euros for a single person. The left-wing party also defends a drastic reduction of excise duties, VAT and other taxes in order to lower and block the prices of fuel, heating oil and pellets.

2. To make Engie pay by a tax on excess profits (proposed legislation-Mertens)

"Engie is in the process of realizing 9 billion in excess profits," adds Peter Mertens. For the past year, we have been demanding that the government takes action against these excess profits. For a year the government has been minimizing, slowing down, distracting and hasn't taken any action. On September 20, the PTB MP submitted a concrete bill, co-written with a specialized law firm, which meets all the objections of the State Council, and would allow a tax of 70 % on the excess profits of Engie and other energy producers. It can be passed tomorrow, and those billions can be used to lower our bills. Other countries such as Italy, the United Kingdom and Greece have already taken steps in this direction. "It's a question of political will," says Peter Mertens.

3. To take back the energy sector from the hands of multinationals

"No, today the market is not going "crazy" as Prime Minister Alexander De Croo says. The capitalist market works like that. For the energy multinationals, gas and electricity are not basic necessities, but mere commodities to make maximum profits," explains Peter Mertens.

Since 1999, all the traditional parties, from the Liberals to the Greens to the Socialists, have defended the liberalization of the sector. "We need to go in the complete opposite direction," he adds. “We need to take important sectors like energy out of the market and into the hands of the community so that they produce for the well-being of people and our planet, not for profit. This is the only fundamental solution to the crisis we are facing.”

"Faced with the greatest crisis in purchasing power since the Second World War, we will not stand by idly," concludes Peter Mertens. We need a completely different policy than the one currently in place. And we're going to have to tear it out, by putting the pressure on. "We call on the population to mobilize and organize themselves, with us, but also in their neighbourhoods, their companies and obviously within the framework of the action plan of the trade union organizations. "

[2] Maximum 70€/MWh, the price of October 2021, before the spectacular increases of the last months.