PTB MP Gaby Colebunders reacts to the Bilzen fire: “Down in the mine we are all black”

On Sunday 10 November, a future reception centre for asylum seekers in Bilzen, Flanders, was destroyed in an arson attack. The fire did not occur out of the blue. It is the consequence of a far-right strategy aimed at sowing hatred and division. Here is the reaction in Parliament of PTB-PVDA deputy Gaby Colebunders, former Ford worker in Genk (Limburg province) and son of an immigrant coal miner. 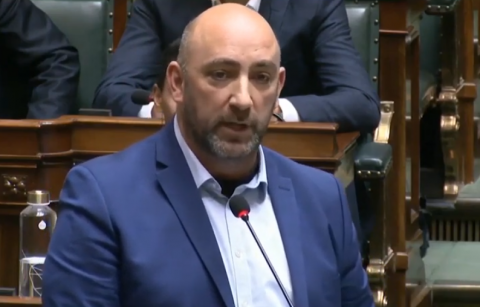 For me, hailing from Limburg, this week has been tinged with bitterness. The reputation of hospitality of our Province of Limburg has been greatly tarnished. This morning however, my mood turned a little bit more “happy”, as we say back home, when I opened the “Belang van Limburg” newspaper and saw that 97% of the Flemish people condemn this crime, this arson attack.

I am the son of an immigrant coal miner. I grew up in a multicultural neighbourhood of the Genk region. In those days, our reasoning was clear: “siamo tutti neri”, down in the mine we are all black.

Today, Mr. Speaker, honourable Minister, when I check the social networks, I see nothing but hatred and division. And those who sow division will reap hatred. This very week we have been flooded with twitter posts from our right-wing politicians, the Twittersphere kings, claiming that they are in no way responsible for this.

How can you say this, Mrs Ponthier (Vlaams Belang), when you are spending 600 euro sponsoring actions against the centre for asylum seekers? I don’t know how one can make such a claim while calling time and again for the parks to be “cleansed” of these people? How could you possibly state that you have nothing to do with that?

While it is true that this arson was committed by a handful of people belonging to the far right, it was you who struck the ideological match.

It is easy to impose an anti-social policy and always lay the blame on others. First the Walloon, and now the refugees. Who will it be tomorrow? It is the same right-wing parties that refuse to make multinationals contribute fairly to society, that vote for the bombing of other countries, that are against development cooperation, and refuse to take action on climate change. It is you who are creating those refugees, let’s be clear about that! And then you turn people against each other. The only ones to rejoice, of course, are the multinationals and the richest 1%.

Racism is a crime that leads to fascism! We will continue to strongly oppose it. And this is why we say: yesterday, today and certainly tomorrow, siamo tutti neri!”