The PTB-PVDA promises a strong social opposition to the Europe of multinationals. 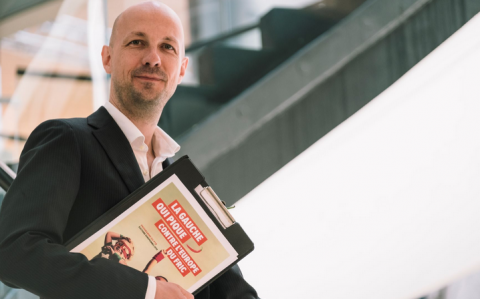 Conservative Ursula von der Leyen was narrowly accepted by the European Parliament as the new President of the Commission. Her appointment was the direct result of a deal between Christian Democrats, Socialists and Liberals. In exchange, the Liberals received the Presidency of the Council with Charles Michel, the Socialists the presidency of the European Parliament and the EU’s foreign policy.

The long list of promises von der Leyen made did not convince Marc Botenga: "She was the candidate of the establishment and for neo-liberal continuity. Tackling the social and climate crisis today means breaking with austerity policies and market dogmas. However, we have not heard a word about it. Even with regard to tax evasion, she remained non-commital.”

Von der Leyen said there would not be enough public money for climate transition, but wants to invest more in weaponry. "Her priorities are totally wrong," says the PTB’s MEP. Massive investment in European defence and NATO means less investment in people and the planet. It also means more interventions that create chaos and misery outside Europe. While she is being held responsible in Germany for alleged abuses with public funds, she now promises more money at European level for multinational arms companies. »

With the European United Left, the PTB wants to engage in the coming years not only in a firm opposition to the policy of austerity and liberalisation, but also to constitute a counter-power for a fundamentally different Europe. For Botenga, it is clear: "European solidarity is necessary. But the European Union is stuck in a logic of competition and austerity. The European treaties go in the direction of inequality, liberalisation and privatisation. Meeting today's major societal challenges in a structural way requires a totally different Europe, with massive investments for social progress and ecological transition. That is why we want to break with the European treaties and build a Europe of solidarity and cooperation. »