The PTB-PVDA wants a Corona Tax on big fortunes

The PTB-PVDA proposes the introduction of an exceptional Corona Tax on fortunes exceeding 3 million euros in order to guarantee the income of families during the coronavirus crisis. "The coronavirus crisis is first and foremost a health crisis. At the same time, there is a social emergency, with a million people threatened with technical unemployment. It is important today that measures be taken to protect workers' salaries," explains Raoul Hedebouw, spokesperson for the PTB-PVDA. 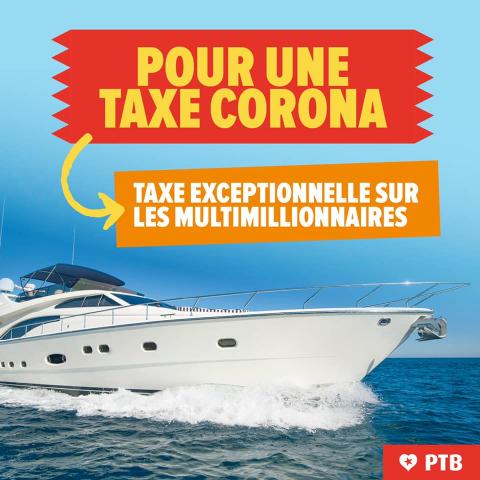 "In times of crisis, the wealth redistribution issues are far more forceful. On the one hand, hundreds of thousands of families now see their incomes threatened. On the other hand, vast amounts of money are amassed by a handful of multimillionaires. With this small "one shot" tax of 5 % on the few wealthiest families in the country, we can raise at least 15 billion. This money will make it possible to increase the compensation for economic unemployment and to guarantee the incomes of all workers currently affected by the crisis in our country."

Estimates suggest that at least one million workers are in economic unemployment. According to the government's proposal, they will be paid no more than 70 % of their salary. And then again, with a maximum ceiling (€ 2,750 gross plus a premium of € 5 gross per day) which means that an average worker will lose up to € 500 per month. Not to mention the fact that a number of sectors and services are not even entitled to it.

"I've received hundreds and hundreds of testimonies from worried people who don't know how they're going to manage at the end of the month", says Raoul Hedebouw. "The government has promised a lot for big business, but it is time for an emergency response that is up to the task for workers. Economic unemployment must be extended to all workers: to employees, student-jobbers, all temporary workers, etc. so that no worker is left behind. And we have to guarantee them 100 % of their wages during the crisis while increasing the current ceiling to the average wage (€ 3,558 gross)."

"A small one-shot tax that would only affect multimillionaires"

According to the calculations of PTB-PVDA tax expert Marco Van Hees, an exceptional tax of 5 % on multimillionaires could yield up to € 15 billion (see calculation below). This would affect only 2 % of the population, but it would make it possible to create a fund to refinance social security and absorb the cost of increased economic unemployment.

"A small section of the population has become much richer in recent years thanks to the effort of millions of workers. Barely 2 % of the population owns assets of € 663 billion. Nothing is more normal than to ask them today in times of crisis for a small solidarity contribution", concludes Raoul Hedebouw.

The Corona Solidarity Tax is an exceptional or "one-shot" tax, which means that it is levied only once. A single levy justifies a higher rate than an annual tax. The rate of the tax is thus set at 5 %. It would apply to household assets from € 3 million upwards. For example, a household with assets of € 4 million would pay a tax of € 50 000 (€ 1 million x 5%).

The assets taken into account are the total assets of the household, i.e. the sum of real estate, financial assets and valuable movable property (yacht, jewellery, master paintings, etc.) from which debts are deducted. The tax shall be calculated on the amount of such assets exceeding € 3 million.

The Corona Solidarity Tax can bring in 15 billion euros.

This return is estimated by applying the breakdown of assets calculated by Professors Rademaekers and Vuchelen (VUB) (1) to the current total assets of Belgian households..