The delegates of the PTB-PVDA Unity Congress have elected Raoul Hedebouw as the party's new president by a large majority. Hedebouw, who received 94.1% of the vote, is taking over from Peter Mertens. The announcement was made during the closing session of the congress, which - due to compulsory health measures - had to be held online. 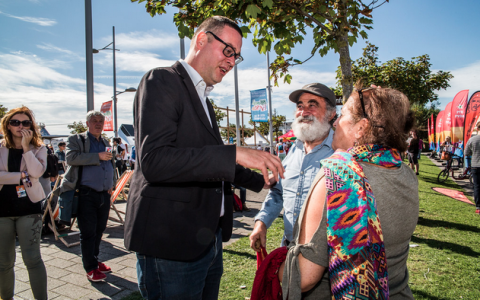 "The working class and the youth need their own party more than ever. A party that firmly opposes the Right and the divisive politics of the nationalists. A party that proposes a genuinely alternative social project. This party is the PTB-PVDA, and we intend to continue our work to develop it with the orientations established by this congress," says Raoul Hedebouw.

The new president, who is fully bilingual, is the ideal spokesperson to convey the core message of the PTB-PVDA's Unity Congress: "The separatists are preparing to divide the country in 2024. There is the prospect of the [Flemish nationalist] N-VA concluding an agreement with the [French speaking social-democratic] PS that would pave the way to confederalism. At the same time, the fascists of Vlaams Belang are also on the warpath. The project of the separatist bloc is an anti-social, divisive project that plans to dismantle social security. Workers have nothing to gain from this. And we are not going to let it happen. Despite more than 30 years of nationalist propaganda, the majority of Dutch as well as French speaking people, want "more Belgium", not more division. If there is any divide in Belgium today, it is between the people and the politicians." The left-wing party has made the fight for the unity of the country a priority for the years to come, most notably through its We Are One campaign.

The 883 delegates to the congress have worked on these new orientations for a year. They were presented this Sunday under the heading, "The party of the working class. The party of the youth. The party of socialism". Our congress is the result of a broad democratic process lasting more than a year," explains Raoul Hedebouw. Eighty-three commissions were held across the country. Hundreds of contributions have been gathered in more than 500 pages of reports and more than a thousand pages of suggestions, criticisms and amendments. Each delegate has played an active part in the process. Which other Belgian party can boast such broad participation of its membership base in the drawing up of its fundamental orientations?"

In addition to the important issue of Belgian unity, the working class and the youth are key priorities for the PTB-PVDA. Raoul Hedebouw: "The organised working class is the driving force of social resistance. It is the pride of this class that sets the tone in the resistance to capitalism. The pride of a class that is aware that, without it, society would not function. Because it is not the shareholders who run the factories or the trains, who clean the hotel rooms or care for people. We have seen it, and we are seeing it every day, in the ongoing Covid-19 crisis. That's why we want to give workers a central place in our party."

"With this congress, we also want to give a central place to the youth," he continues. "To win over the young working class, the students, the young people who are mobilising for the climate, against racism, sexism, and the extreme right. All those who want to build another world. We want them to find their place in our party and in our youth organisations, RedFox, Comac and the Pioneers."

Finally, another major focus of the Unity Congress has been the societal debate, with a clear choice made in favour of socialism. "We want another society, socialism 2.0, with a different logic to the current capitalist logic. A society where our scientists will be able to undertake research for the benefit of the people rather than to serve the interests of the boards of certain multinationals. A society where real ecological planning can be set in place, based on the needs of people and the limits of nature," concludes Raoul Hedebouw.

Read the profile of the new president of the PTB-PVDA (in French) here.