A signal of hope: lessons from the PTB-PVDA election campaign

The PTB-PVDA (Workers’ Party of Belgium) is a big winner in the last elections all over Belgium. In Wallonia and Brussels, it is the party that has made the most progress. In Flanders, it is the second fastest growing party. What are the reasons for this success? In this article, we look back at the election campaign and the result of the May 26 elections. 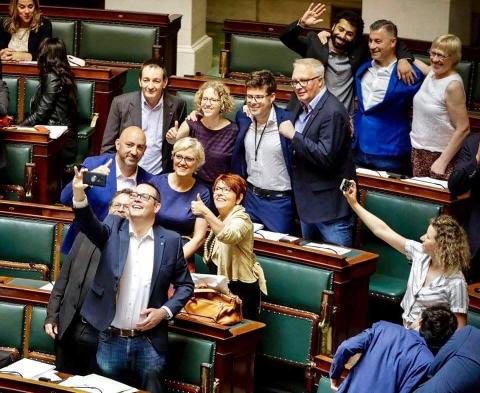 The number of people who voted for the PTB-PVDA more than doubled: from 251,276 in 2014 to 584,621 in 2019 across the country. We represent 8.6% of all voters in Belgium. In Wallonia, the party's score is particularly high, with 14.5% of the votes for the European elections. For the Brussels Region as a whole, the results are excellent, with 13.5% . In Flanders, moving against the tide of the extreme right, we get 5.6% of the votes.
The genuine left had not obtained such a high score in Belgium since 1946, when, just after the war, the Communist Party won 12.7% of the votes.

Our party now has many more MPs in Parliaments. We go from 8 to 43 elected representatives.

The group we form in the House is strong and diverse, with four women and four workers who, together, have more than a hundred years of trade union experience. All of them have a large grassroots experience.
It is unique in Belgium to have workers as members of parliament. Nadia Moscufo was a cashier at Aldi (supermarket), Gaby Colebunders worked at Ford Genk, Roberto D'Amico at Caterpillar and Maria Vindevoghel at Sabena (airport).
Our identity as a unitary party (the PTB-PVDA is the only national party in Belgium) will be important for our federal parliamentary group. Our representatives come from all three regions of the country but they all speak the same language: the language of the people.

The pillars of success

This election victory is the result of our politics, our presence on the ground with our 18,000 members and our communication, especially on social media. There are  three pillars to our success.

The first pillar is the renewal of the party since 2008, crucial in the emergence of the party as a credible alternative. The PTB has put people's social problems in the spotlight and put them on the agenda: pensions - both the age of the pension and the amount of the minimum pension -, unaffordable electricity bills, high prices for medicines and health care, the need for tax justice and for a mobility that is both socially and ecologically fair. We have highlighted the growing gap between rich and poor and the sharp increase in child poverty. We have denounced the increase in bills for people, while multinationals continue to evade taxes. It was also the PTB who took the only consistent position by rejecting any idea of a "carbon tax", a socially unfair and climate-inefficient tax, that all other parties voted in Parliament.
And it is the PTB who has always consistently led the fight against greed in the political world. By denouncing the pension privileges and the exorbitant severance pay for parliamentarians. By proposing to cut the salaries of ministers and members of parliament by half. Because it is not surprising that politicians do not know what it means to increase VAT, since they themselves do not feel it.

Second pillar: the presence on the ground, with a strong grassroots campaign, with thousands of volunteers.  In 2014, we had 7,600 members; in 2019, we have 18,000. More than double in five years. This has allowed us to develop new local sections in many municipalities, but also to have a greater presence in the factories. Our members and volunteers have given their best. They have been present in places where other parties never go: working-class districts, companies... To listen to people, to convince them.

The third pillar is communication on social media. In the last weeks of the campaign, 500,000 people were reached every day on social media. The video clips of our spokesperson Raoul Hedebouw's speeches in Parliament were particularly successful. Short video clips were broadcast to explain our positions and proposals and sometimes compare them with those of other parties.

The voice of the working class

An obvious trend in elections is the sanctioning of all traditional parties, which can also be seen elsewhere in Europe. More and more people are turning away from traditional politics. They are right. Traditional politics is oriented towards personal interests and under the influence of lobbies. But in our country, unlike the rest of Europe, the crisis of traditional parties is causing some people to turn to the PTB. And not just to the far right.

Our party defends a policy that is close to the people, with elected representatives living on an average worker's salary. Our alternative is to give the working class back its voice, and to offer a real solution to the anger of people, who would otherwise turn to the extreme right. This is why many trade union delegates and workers have for the first time massively called for a vote for the PTB.

That is why the voice of the 584,621 voters in the PTB-PVDA is not a signal of disenchantment, but a signal of hope. A voice that comes from a class position, against the establishment's policy that continues to make ordinary people pay. In all the major companies, in industry, in all the industrial basins of the country, we see a wave that turns to the authentic left.

Countering the rise of the far right

The most important cause of the rise of reactionary parties is the failure of the establishment and its neoliberal austerity policies. But the normalisation of the far right is also an important factor in the success of this trend.

This unhealthy right-wing wind is blowing all over Europe. Nourished by Steve Bannon's international Alt-right movement, which advised Trump but also Le Pen, Salvini..., with his tactical and financial support. The populist right is becoming more and more successful. In the United States with Trump, in Brazil with Bolsonaro, but also in Europe with Le Pen and Salvini.
In Flanders, the victory of the fascist party Vlaams Belang (18.5%) is very worrying. This result is partly explained by a protest vote of the working class. People are very angry with the self-service and austerity policy. Our party's first task is to help point the people's anger to those who are really responsible for the crisis.
It is clear that the extreme right does not want a real break with current politics. It combines social demands in a demagogic way (on pensions, VAT,...) with nationalist demands, racism and anti-Islamic rhetoric. As far as social policy is concerned, Vlaams Belang is a wolf hidden under a sheep’s clothing. In reality, this party always defends "the rich first" and a tough neoliberal economic policy.

The danger of this normalisation of racist discourse is already apparent in practice today. Dozens of testimonies report racist acts and statements since the elections. Under the influence of Steve Bannon, the young right-wing guard has developed an identity movement that is preparing a war against "other races", that advocates the submission of women to men and that wants to marginalize the LGBT movement.

We cannot fight the extreme right without also fighting the politics of traditional parties. There is no point in castigating the voters of Vlaams Belang, let alone marginalizing them. We must fight racism with a strong social agenda. The PTB-PVDA is the only party that offers a real alternative in the country's working class neighbourhoods and industrial corridors, which can credibly counterbalance the rise of the far right.

We will continue to be a locomotive to the left and fight for a social shift. Only in this way will we achieve a real left-wing future for our country; only in this way will society and politics become fairer, more honest and more social. We have a world to win.