Stop the normalisation of fascisation in Flanders (Belgium)

Despite an attempt to change its façade, Vlaams Belang remains a far-right racist party. It is essential to unmask the racist, anti-social and dangerous nature of this party, as well as the attempt at "normalisation" that is at work. 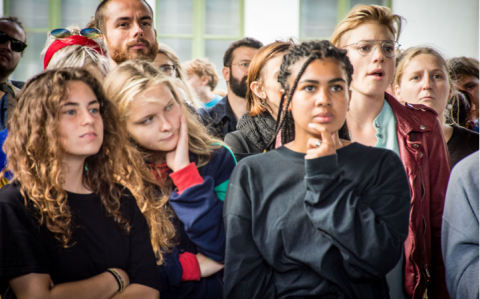 In the elections of 26 May last year, the Workers' Party of Belgium (PTB-PVDA) was not the only one to win: the fascist party Vlaams Belang obtained 18.5% of the votes in Flanders, becoming the second largest party in northern Belgium, and the third largest party nationally. Its number of seats in the various parliaments has exploded, including in the European Parliament, with 3 seats (instead of just one seat before).

When, on 13 July, Filip Dewinter (Vlaams Belang) chaired the session of the Flemish Parliament, only the four elected representatives of the PTB-PVDA protested and raised signs on which it was written: "Not in our name". A party that promotes discrimination, racism or fascism cannot be allowed to speak for the entire population.

Vlaams Belang is and will remain an extreme right-wing, racist party, and to say that some of its elected representatives flirt with fascism is an understatement. Behind the nice suits, the more conciliatory language to other politicians and the public meetings where they seem to behave correctly, are hidden a strategy and ideas that have remained unchanged.

In 2004, the Vlaams Blok, convicted of incitement to hatred and racism, changed its name to Vlaams Belang. In 2014, the party elected its new chairman, Tom Van Grieken, who tried to make the VB look like a "new" party, suggesting a break with the old Vlaams Blok and its historical figures, such as Antwerp's Filip Dewinter. However, it is nothing more than a smokescreen.

Both chairman Tom Van Grieken and the leading figure Filip Dewinter, as well as the rest of the party, aspire to a white, ethnically homogeneous Europe. They use terms such as "islamization" and "de-Westernization" to describe the diversity of society. Terms borrowed from the conspiracy and supremacy theories of the "Great Replacement". Dries Van Langenhove, the new extreme right-wing "golden boy", defended the racist song "The Congo - former Belgian colony, editor's note - is ours" sung during the Pukkelpop festival in 2018.

It is not only in the area of racism that the party shows its true face. In Van Grieken's view, the attention paid to equal opportunities for women is totally stupid and he calls those who defend it "gender fundamentalists and extremists".

While Vlaams Belang has not changed, there has been a clear shift in the way in which other parties' relations with this party are addressed. It can be said that the last two elections are important breaking points in this respect. The normalisation of the far right is part of a deliberate strategy by the VB itself, but also by the other right-wing parties that provide it with external support. It is worth highlighting in particular the role of the N-VA, the largest party in Flanders (and Belgium), a nationalist party that has never blocked the extreme right, but rather served as a bridge to legitimize the VB.

Since the elections, Bart De Wever, the chairman of the N-VA, has made great strides towards a particularly tough, elitist and nationalist right-wing Flanders. His basic note for the next Flemish government reads like a manual of neoliberal ideas. He made the far right Vlaams Belang quite acceptable, negotiating with them for two months, and proposals that have long been unthinkable are taken up without any embarrassment.

On May 26, the voter presented the parties in the governing coalition with a monumental slap in the face. The governing parties - the N-VA, CD&V and Open Vld - together lost more than half a million votes. This was a strong signal against the austerity policy of the last five years, a social signal, for lower bills, better pensions, affordable housing. Vlaams Belang skilfully played on the situation (as did the Rassemblement national de Marine Le Pen in France) to demagogically couple social demands with racist and islamophobic rhetoric and thus managed to gain a lot of votes.

Two months after the elections, De Wever & Co. swept away all social concerns. The N-VA wants to put the turbo on the competitiveness of Flemish companies, while the population can expect austerity and social breakdown. The specter of Vlaams Belang and its racist and nationalist ideas is put forward to hide the anti-social agenda of the next government. While a large part of the budget will benefit big business, De Wever wants to ensure that the people in Flanders fight with the "newcomers" for the crumbs.

The nationalism that brings together...

To conceal his attack on the workers, Bart De Wever puts all his efforts into creating a collective "Flemish consciousness". He fuels nationalist sentiment to make us believe that everyone will be united, from the flexible worker to the shareholder, from the welfare recipient to the CEO, in "Greater Flanders". Soon, we will learn at the Museum of Flemish History that the Flemish people share the same history, values and interests, in a spirit of brotherhood. Culture will be reduced to the status of a propaganda tool and a simple business card for Flanders. Bart De Wever takes the instrumentalization of education, culture and the public television channel to a new level in the service of his nationalist project.

Never has the division of the country been a theme of the election campaign. Only 6% of the people in Flanders want a new reform of the state, almost as few as the 5% of French-speaking Belgium. In addition, a recent survey showed that people in Flanders, Wallonia and Brussels share the same priorities: a fair tax on large fortunes, a minimum pension of €1,500 or the preservation of wage indexation. Nevertheless, De Wever uses the Flemish government to block the whole country. A new stage in the hostage-taking of the election results in order to achieve De Wever's "historical mission": confederalism. This division of the country has the same objective as the right-wing policy he wants to pursue in Flanders, with the dismantling of social security, collective bargaining on wages and automatic wage indexation. Confederalism is a direct attack on the social achievements of workers in our country. It is solidarity that is being broken. Not only between workers in different regions of the country, but also between weak and strong sectors, between people in good health and the chronically ill, etc.

For the De Wever's N-VA, the negotiations with the fascist VB for the formation of the Flemish government were not intended to form a government directly (they did not have a sufficient majority and the other parties did not like it), but to influence the composition of the next Flemish government. This is a very similar scenario to Denmark's, where the far right has been supporting the government for years. The next step is what is happening in Italy and Austria. Two months ago, no one would have thought that Vlaams Belang could be part of a government in the medium term. However, this option has now become possible, and there is a good chance that it will become a reality in 2024, and perhaps even before.

A clear and present danger

The consequences of a Vlaams Belang in power would be extremely disastrous. The representatives of this party advocate a ban on the Islam, which they consider "in total contradiction with Western identity". The splitting of the country would lead to the destruction of all social achievements. The social demagoguery of the far right will never lead to real social progress. Such a scenario is all the more worrying if we think of the repressive apparatus that has been considerably developed in recent years in the name of the fight against terrorism. The State can more easily arrest and detain citizens, wiretap them or deprive them of their rights. All the ingredients for an authoritarian state are therefore in place. What will happen if it ever finds itself in the hands of the far right?

In the minds of some, the normalization of the extreme right is also a source of legitimacy for the use of violence. Recently, an elected representative of the CDU party was murdered in Germany for defending a more humane migration policy. In Norway and Great Britain too, anti-racist politicians have been killed. In Italy, the number of racially motivated incidents has tripled since the Lega's participation in the government.

Vlaams Belang is and remains an extreme right-wing, racist party. Its ideas and objectives have not changed at all. On the contrary, the fascist current embodied by extreme right-wing groups continues to grow stronger. The normalization of the far right is already well advanced. And that is why it must be stopped. The progress of Vlaams Belang is not irreversible. It is not by "letting things calm down" or "speaking about it as little as possible" that we will be able to stop them.

It is our duty to unmask and reveal to people in the workplace, in the neighbourhoods... the true face of Vlaams Belang, which presents itself in a social profile. People are right when they criticise anti-social policy and the lack of citizen involvement in politics. Nevertheless, wherever the far right is in power, it adheres to and pursues the establishment's socio-economic policy. It is also necessary to remove from people's minds the idea that Vlaams Belang "will break its back when governing". What has happened in other countries should serve as a warning.

To counter De Wever's plans, there must be a broad countermovement in favour of a social, sustainable and just alternative and a call to action. With civil society and trade unions, the cultural sector and the climate movement. If we want to make housing a right, fight poverty vigorously, work for true inclusion and guarantee the quality of life on our planet, we have no choice but to join forces and defend a totally different policy. This movement can count on the support of the PTB-PVDA. From the streets to Parliament, we will help to put social priorities on the agenda.