Success for the general strike in Belgium: the workers’ demands their rightful part of the wealth

The appeal from the common trade union front for a general strike on 13 February has been massively followed. It was a very long time ago that it had been this strong. 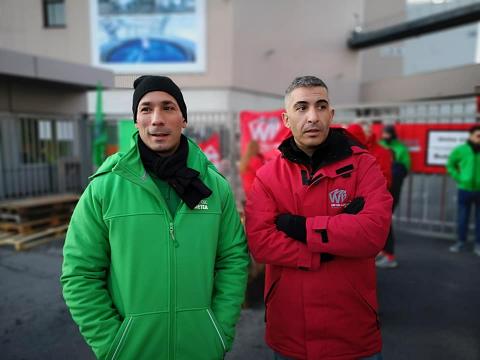 The appeal from the common trade union front for a general strike on 13 February has been massively followed. It was a very long time ago that it had been this strong. Raoul Hedebouw, PTB spokesperson: « Flemish, Walloon, Brussels people have spoken today with one single voice: the one from the world of work. The expression « without workers no wealth » has been confirmed in a brilliant way throughout the country. It is high time that this wealth is returned to them. »

From metal workers to petrochemical workers including employees from e.g. supermarkets, care homes, laundries, day nurseries, public transport, ports and airports, commerce and non-profit sector, services and manufacturing, private and public, large and smaller enterprises, from Ostend to Arlon, from Antwerp to Hainaut…This 13 February workers, male and female, have spoken with one voice throughout the country. « We’re no longer succeeding to make it till the end of the month. We’re paying more and more for energy and consumer goods. And what do the government and the employers propose? A maximum salary increase of 0.8 % for the next two years! »

« We’re working ourselves in our grave for peanuts »

« 1500 euro net (per month) full time, understaffed, with a work pace that increases, processes that are monitored by the minute, an index jump and I can’t remember how long ago our last real increase was… », tells Sonia, assistant caregiver in a home managed by the multinational Orpea. « It’s not normal. With my colleagues, we’re working ourselves in our grave for peanuts. »

The list of testimonies that we have received is long and goes the same way. The purchasing power is the main worry for a lot of people. Why 0.8 % salary increase in two years, while profits have doubled last year? Why 0.8 % while taxes and invoices are piling up? Those are the questions that we heard at many picket lines. In the sectors with the smallest salaries (laundry, cleaning, lorry drivers…), the workers notably ask for a minimum salary of 14 euro per hour.

« The pressure at work is ever stronger, explains Fatiha, a worker at Swissport.We have to clean the aircrafts with less and less people in an ever reduced time. Hover, clean, pick up the rubish, ensure that everything is spotless, unload the material, the towels, the trays, load all the new goods… All of this in 45 minutes. Previously it could be the double. But that’s finished. You have to be "competitive", management tells us. Otherwise, we lose the contracts and people will be laid off. » And adding: « The work is so hard that some get their back blocked halfway through the job, and have to be evacuated from the tarmac in an ambulance. And the government wants to cancel the time-credit and the options for early retirement? I don’t know how we are going to continue. »

The PTB visits 600 pickets and defends the purchasing power

PTB spokesperson Raoul Hedebouw reacts: « Purchasing power, work pressure and scrapping the end of career provisions: it is this cocktail which enrages people across the country and the sectors. Employers and government don’t even show a minimum of respect for those that make the country tick. It’s time to turn the logic around. To begin with returning the liberty to obtain salary increases. Our research department has found out that there is a margin for at least 3 % interprofessionnal salary increase. »

Of course, the PTB didn’t miss the opportunity to actively show its solidarity with the strikers of the country. No less than 600 picket lines received a solidarity visit from supporting delegations from the party of the left. « The presence on the ground and the active support for the social struggle is in our DNA, explains Raoul Hedebouw. If the energy encountered today at the different strike pickets continues to express itself in the weeks to come, the government and the employers will have to back down. Is it time that the wealth returns to those who produce it, both for increasing the salaries and the purchasing power and for the end of career provisions, in order to allow everyone to let off some steam after a life of hard work. »

Mobilization also for the climate

The day after the general strike, the Belgian secondary school students striked and protested for the sixth consecutive Thursday for the climate. They were 15,000 this time in Brussels, joined by thousands of university and high school students. The student organization of the PTB, Comac, wrote on its website: « The social debate on the type of ecological transition we want is thriving. Everyone talks about it and awaits from the government that it finally makes real efforts, after long years of deplorable climate policies. And that is only thanks to the young people. »

As PTB Chairperson Peter Mertens explained: « This generation demands to stop the waffle and pass to actions. We need massive public investments, and a policy that makes the big polluters pay and not the workers. A new wind blows over Belgium: the wind of the social climate revolution. »

Unify the vests of all colours

The right-wing politicians try to oppose climate and purchasing power. They want to make us believe that « more climate » equals « less purchasing power ». They are scared stiff that the movement for social justice and for climate justice join up and challenge the only responsible ones for the social and climate misery: the multinationals and big enterprises. Those for whom the only motive is profit. Not the well-being, health or the climate.

And they’re right to have fear. Because it is in the struggle that people meet, that energies are liberated, that the cement is created and that lines can be moved. The movement of the 'gilets jaunes' (the yellow vests) and the trade union mobilization have brought the debate on social justice into the climate movement. And conversely, the climate mobilization has brought new awareness to the workers' world.