“We are more than just cleaning ladies”

One loaf of bread a month. This is what the employers are willing to "offer" to the 140,000 household helpers working in the service voucher sector. Yet another sign of contempt. The response is therefore action. On November 28th, 2019, the first action of a long struggle carried by household helpers was held in Brussels. 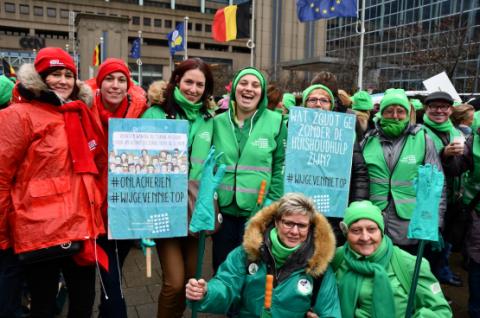 It's high time we showed that we are also people, not "just" cleaning ladies. We are more than that." Gina Verbeke, 55, works at Greenhouse in Waregem. This is a cleaning company that provides jobs for 3,000 people. The CSC (Christian-democratic trade union) shop steward adds: "At my age, it is becoming very hard physically. When I get home in the evening, I'm truly exhausted. I am on my own and the wages are really low. I can't work full-time because it's getting hard and I don't want to fall ill. I can't afford to spend a few months at home. This is about survival.

Her Charleroi colleague, Amandine Staelens, FGTB (social-democratic trade union) shop steward: "It's a very strenuous job. I am 38 years old and I already have back-related problems...”

It is a very strenuous job, especially for women. Indeed, 98% of workers in the service voucher sector are women. Invisible workers. Invisible for a society that has an interest in keeping them in the background to avoid making their desire for better pay, better working conditions or any other kind of recognition too audible.

Most of the time, these women are on their own in the workplace. This makes them more vulnerable in terms of sexual harassment. They are also more vulnerable in terms of economic oppression. Indeed, how do you collectively claim rights when you are alone in the workplace, employed by a firm that you never set foot in and that sends you to work for private individuals or companies? Women workers in the sector are engaged in a struggle against multiple oppression. They are oppressed because they work in a system based on the exploitation of workers. They are oppressed because they are women in a system where, in Belgium, they earn on average 20% less than men and many of them have to work part-time (44% of women are concerned, compared to 11% of men).

In addition to all the difficulties related to their job and their gender, household helpers often have double working days: when they return home after (poorly) paid work hours, they have to work several more hours at home.

The struggle these workers are waging is therefore titanic, but they have no choice. The majority of household helpers in the sector earn between 800 € and 1000 € net per month. When you are a single mother, which is often the case in this sector, living below the poverty line is untenable. "Even if you work full time, you just can't get by. I have been working as a cleaner for 13 years. My salary is 11.74 euros gross per hour. It is not increasing. My husband is on early retirement. The end of the month is not easy. But what will it be like after I retire? I've checked on the website mypension.be. I will get 600 € something per month..." says Claudine, a cleaner from the Mons region.

On 28 November 2019, the household helpers decided to hold a day of action, including a rally in Brussels. A première. It was a success. And it was no small victory. In fact, it was just one step towards the goal : pay increase, and also respect. "We demand decency. We are not at all recognised, whereas we do deserve respect, just like everyone else," goes on to say Claudine.

Coming out of the shadows

These workers deserve all our support, they deserve the respect they are deprived of," explains PTB-PVDA chairman Peter Mertens. This is also what they are fighting for. There are people in our society who are working in the shadows. All is done to ensure that they are not seen. These workers clean houses for a ridiculous wage of 11.50 euros gross per hour. And when they ask for an increase of 1.1%, as provided for in the Interprofessional Agreement (AIP, an agreement negotiated between unions and employers), their employers refuse. This is also the consequence of the introduction of service vouchers in 2004 by the then Minister of Employment, Franck Vandenbroucke (sp.a, social-democrats). Since then, a few large companies have been dominant on the market. And they have been making a lot of money on the backs of these workers. I have also read in the press that Start People distributed 18 million euros to its shareholders last year. What is encouraging today is that the workers in action are from the three regions of the country. We have to put an end to this system. »

A federal deputy since last May, Peter Mertens took the opportunity to address the Minister of Employment Nathalie Muylle (CD&V, Christian-democrats) in Parliament on the subject. She replied: "I hope that an agreement will soon be reached between employers and trade unions on this 1.1% increase. I consider this request to be legitimate and, within my services, the necessary support will therefore be forthcoming.”

As long as the increase is not effective, as long as there is no improvement in the working conditions, and as long as these workers are not treated with respect, their struggle will continue.

This is a nationwide struggle. Household helpers are facing the same problems, whether they come from Mons, Liège, Antwerp or Brussels. They are proud of being part of this struggle, from the north to the south of the country, red and green, all together.

For household helpers, this struggle therefore goes beyond the requirement of a pay increase (even if this is the first priority). "R-E-S-P-E-C-T, find out what it means to me", as Aretha Franklin sang. A clear message the household helpers have sent to the employers end 2019.