We don't need our kitchens to produce more vaccines

A survey of 77 epidemiologists from 28 countries conducted byThe People's Vaccine Alliance* indicates that two out of three of these suspect that we have a maximum of one year before the coronavirus mutates to the point where most first generation vaccines will lose their efficacy and new vaccines will be needed. So, we will need more vaccines soon. Not only in Europe, but also worldwide. Variants know no borders, after all. 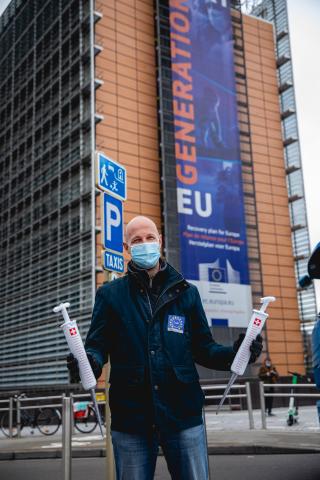 Lifting patents and sharing technology on a mass scale is therefore crucial. As a matter of fact, today no company can meet the huge demand. Patents are also never meant to be used during global emergencies such as wars or pandemics, Nature rightly writes. Not all companies are eager to produce more in the short term: "There are currently no discussions in progress to establish additional, local production for this vaccine," a Pfizer spokeswomanannounced laconically in mid-March. The US pharma giant is only considering additional production sites outside the US and Europe "after the pandemic phase". In doing so, the company is actually contributing to an artificial shortage of vaccines.

Meanwhile, discussions on the patents issue are even being held in the White House. The only ones to remain stone-deaf are the European institutions. In Belgium, minister Frank Vandenbroucke argued that this "would not solve the immediate pressing issues" because, after all, we can't produce the vaccines by ourselves, "in our own kitchens". Fortunately, we don't need our kitchens. A large part of the world's production capacity remains unused. It could be activated in a relatively short period of time.

Activation of the existing production capacity

EconomistsJoseph Stiglitz and Michael Spence are particularly categorical. According to the Nobel laureates, there should be no vaccine shortages at all. They estimate the production capacity for 2021 in the United States, India and China at 9.72 billion doses. According to Oxfam estimates, only 43% of the global production capacity for COVID-19 vaccines is currently being used for the production of approved vaccines.

Those figures may seem impressive, but they could well be an underestimation. The European Commission was quick to find 300 companies that could contribute in various ways. The American Associated Press has identified factories on three different continents that could start production of hundreds of millions of Covid vaccines. A brief anthology. In Bangladesh, Incepta had brand new equipment brought over from Germany; it has many years of experience and is running today at a quarter of its capacity. In South Africa, the Biovac company claims to be able to produce about 30 million doses annually. In Denmark, Bavarian Nordic has a capacity of over 200 million doses. Canadian Biolyse Pharma submitted a license application to Johnson & Johnson early March 2021 for the production of a generic version of their vaccine. This company can produce two million doses per month. Both the Institut Pasteur in Senegal and Vacsera in Egypt can also be used for theproduction of mRNA vaccines.Oxfampoints to producers in India and China with great potential for the production of mRNA vaccines.

Expertsfrom the International Federation of Pharmaceutical Manufacturers & Associations (IFPMA) and the Coalition for Epidemic Preparedness Innovations (CEPI) note that a large quantity of bioreactors is available for the production of the viral vector and subunit vaccines. A mere 1 to 5% of such capacity would be sufficient to supply enough raw material for those vaccines, thus limiting the impact on the production of other health products.

In addition, traditional vaccine giants such as GSK, Sanofi and Merck are as yet not significantly involved.According to plans, together they would produce just over 225 million vaccines by 2021, which is enough for a mere 1.5 % of the world's population. GSK/Sanofi were ready to produce more than a billion doses of their own vaccine. Merck was also ready to produce hundreds of millions of doses of its own candidate vaccines. Prior to corona, between them they produced the bulk of the 3.5 to 5.5 billion vaccines produced worldwide. There is still a large potential production capacity there that can be activated in the short term.

It can be done fast

The transfer of technology and know-how is the key. After which production can often be launched within a maximum of six months, as shown by research carried out by the NGO Knowledge Ecology International (KEI) based on some 70 current projects. The same applies to the different platforms.

The Swiss Lonza concluded an agreement with Moderna on May 1, 2020. This agreement provided that production could only start one month after the transfer of technology. The NGO Knowledge Ecology International refers to theGerman company Rentschler Biopharma SE which signed an agreement with CureVac in November 2020, and was already developing its production capacity three months later.Incepta from Bangladesh states that it can immediately produce 500,000 doses annually, preferably a subunit or mRNA vaccines. The Argentine company mAbxience launched production of AstraZeneca's viral vector vaccine three months after the technology transfer. The Brazilian examples of the Fiocruz biomedical centre (AstraZeneca) and the Butantan biomedical institute (Sinovac) show that elsewhere, too, new production units can be set up quickly.

Alain Alsahani of Doctors Without Borders thinks that mRNA could bring about a real paradigm shift. The inoculum for viral vector vaccines such as AstraZeneca's is biologically produced in large stainless steel vessels called bioreactors, in which the cells that are needed are grown. However, these cells are extremely sensitive: the least disturbance will cause production to run into trouble. In contrast, the chemical processes of mRNA technology are a lot easier to roll out on a large scale. It also offers greater flexibility for the future, for instance in case it has to be adapted to variants of the coronavirus.

The process to convert the RNA into lipid nanoparticles (LNP) does however require specialized knowledge. That knowledge is still very centralized, and production capacity is limited. Pfizer itself has proven that technology transfer is also possible in this area. In fact, it is Austrian Polymun Scientific that developed the technology and transferred it to Pfizer. It is believed that Lonza is also taking this step for Moderna.

Leading scientific journal Nature notes that state authorities could have compelled chemical companies to produce more of these raw materials earlier. Today the new European HERA Incubator can play a role in this. This new public-private partnership was initiated by the European Commission and aims to tackle potential bottlenecks and issues in production, not only by mapping existing capacity but also by supporting the quick development of new production capacity. It is modelled on the US government's biomedical research agency, BARDA, and aims at managing that capacity quickly and centrally across the chain. By comparison, the United States launched Operation Warp Speed, which included focusing on these resources, as early as April 2020.

A three-stage rocket to more vaccines

At present, increasing production capacity mainly takes place through bilateral agreements between companies. The patent holders negotiate and enter into one-to-one manufacturing agreements with other selected companies that can then gradually start production. Pharmaceutical companies such as Pfizer, Moderna or AstraZeneca are keeping a tight grip on the reins and determine what, where, how much, when and at what price to produce. This process is both slow and inefficient.

A three-stage rocket would allow the European Commission and the Member States to take control and make the COVID-19 vaccine a public good, accessible and available to all. First of all, patents as well as all other intellectual property rights on the vaccine and drugs to combat corona must be lifted. That is why today we must support the so-called COVID-19 patent waiver by India and South Africa in the World Trade Organisation. Such a general patent suspension would ensure legal certainty for candidate vaccine developers and manufacturers, as vaccines are often subject to different intellectual property rights. We also carry those principles with the broad European Citizens Initiative#NoProfitOnPandemic. In addition, the option of compulsory licensing could be kept open at national level.

Secondly, knowledge and technology must be widely shared. The COVID-19 Technology Access Pool (C-TAP) created by the World Health Organization is an ideal tool for this purpose. Unfortunately, participation has remained voluntary so far, as a result of which not one single vaccine company has shared its technology. Here, too, state authority has an important role to play. The European Commission has to use the projects at hand within both the Task Force for Industrial Scale-up and the HERA Incubator to support broad technology transfers.

Finally, the production capacity available must be converted and deployed as quickly as possible. Today's fragmented approach, where each company concludes its own bilateral agreements with subcontractors, should be replaced by a central-coordination approach, as we saw with Operation Warp Speed. A supranational approach, under the auspices of the World Health Organization, would allow different companies worldwide to be engaged in the sub-steps of the production process. This would ensure the greatest possible impact for the new measures aimed at tackling bottlenecks in production and promote business cooperation. HERA should be instrumental in supporting this dynamic.

Those who say that the elimination of patents is no panacea are right. It is, however, a necessary first step. The sooner we act, the sooner we can all get out of this situation.

Share via social media
Tags
No profit on pandemic