What does China’s experience teach us in the battle against the corona virus, according to the World Health Organization?

Thursday March 19 is the day the number of corona virus deaths in Italy surpassed China’s. It is also the first day no new infections were detected in China. Other East Asian countries, like Japan, Singapore and South Korea, have managed to contain the corona epidemic better than most countries in Western Europe. What are the reasons? 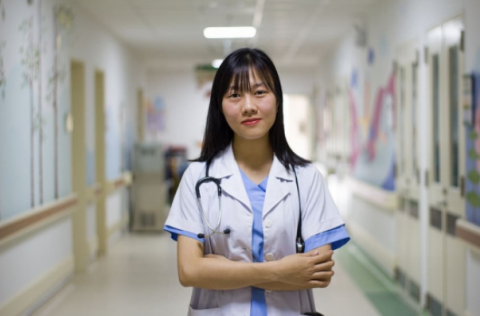 The warning issued by doctor Tedros, head of the World Health Organization (WHO), could not have been clearer. “Washing hands and coughing in the elbow reduce the risk and so does ‘social distancing’”, he said during a press conference on Monday March 16. “But this is not how we will defeat this pandemic (the corona virus, editor’s note). We have a simple message: test, test, test.” 1 It is one of the most important lessons to be learned from the experiences of China and other countries in East Asia.

Dr. Tedros acknowledged countries are now taking measures to reduce  contact between people (‘social distancing’), but most countries fail to actively trace infected individuals. However, according to the WHO, this is the backbone of a successful response to the corona epidemic. “The most effective way to prevent infection and to save lives is to break the transmission chain. This is why we need to test and isolate”, Tedros says. “You cannot fight a fire blindfolded. We cannot stop this pandemic if we don’t know who is infected.”

This is what China has taught the World Health Organization. At the end of February, an international group of scientists went on a mission to learn about the way the outbreak of the virus was handled. In their report, the scientists praise the approach of the Chinese authorities. They describe it as the “most ambitious, agile and aggressive disease containment effort in history.”2

The mission was led by doctor Aylward, who has 30 years’ experience in fighting polio, ebola and other global health emergencies. In a detailed interview with the New York Times, he provided details and background on the Chinese approach to the outbreak of Covid-19, the disease caused by the new corona virus.3

“In towns with limited numbers of cases, massive scans of body temperature were carried out.”

The approach depended on whether towns had zero cases, sporadic ones, clusters or widespread contamination, he explains. First, they started with the basic rules: hand-washing, masks, not shaking hands, identifying symptoms. In towns with limited numbers of cases, massive scans of body temperature were carried out. Sometimes even cars were stopped on the highway to check for persons with fever. As soon as  clusters were found, schools, theaters and restaurants were shut. Only Wuhan and nearby cities went into total lockdown.

The healthcare system was promptly re-organized: “First, they moved 50 percent of all medical care online so people didn’t come in,” doctor Aylward explains. “If you needed prescriptions like insulin or heart medications, they could prescribe and deliver it.”

Patients showing symptoms of Covid-19 are kept away from regular medical infrastructure and sent to a special fever clinic. They have their temperature taken, are being examined, the patient is being questioned and a CT scan of the lungs is immediately taken. This all takes just about ten minutes. If there are indications of infection with the corona virus, a sample from the nose is taken for investigation.

“The virus hardly gets a chance to infect others”

Patients potentially infected with Covid-19 are not sent home but are made to wait for the result of the test. This takes no longer than four hours. When positive, the patient goes into immediate isolation. Patients with mild symptoms - anyone not needing oxygen- are not sent to the hospital, but to a purposely designed facility. These are usually organized in sports complexes and have up to 1000 beds. Patients with severe symptoms or higher risk go to the hospital’s isolation wing directly.

Doctor Aylward is impressed with the way this system has been brought to perfection. “In Wuhan, initially, it took 15 days from getting sick to hospitalization. They got it down to two days from symptoms to isolation. That means a lot fewer infections. The virus hardly gets a chance to infect others.” 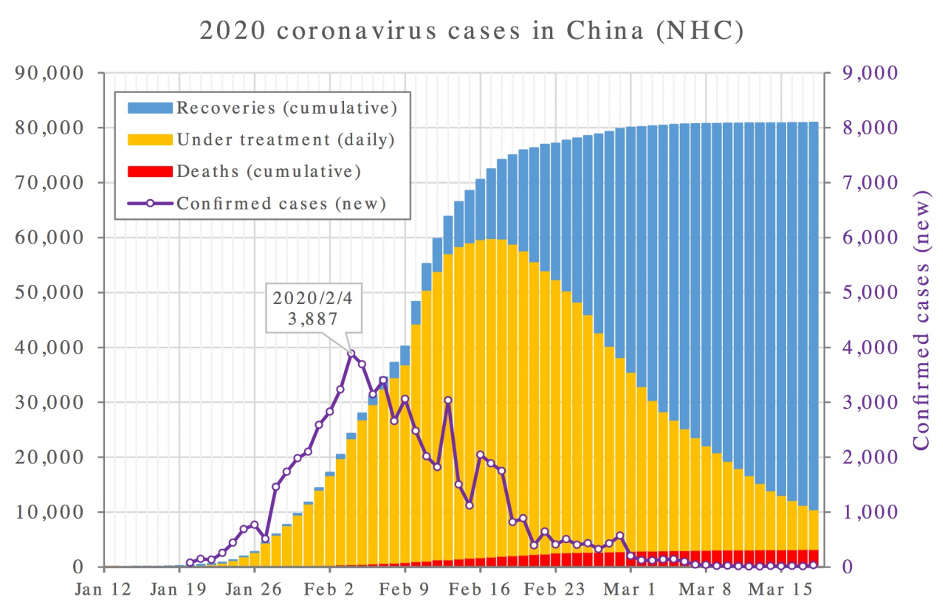 In China the number of new infections today is zero.

What was  important as well: people did not have to pay. The state pays for all corona virus tests. Hospitalized patients don’t pay anything either, even those who have no insurance. Those infected with the corona virus can rely on free healthcare. Help was  offered beyond the medical sector as well. Free transport was arranged, allowing people to travel home after Chinese New Year, food was distributed and workers were given extra holidays to bridge the inactivity gap.

Furthermore, Doctor Aylward was overwhelmed by the way the entire country was involved : “Nobody was complaining that ‘Wuhan got us into this’. Instead, there was this tremendous sense of, “We’ve got to help Wuhan”. Other provinces sent 40.000 medical workers, many of whom volunteered. A lot of civil servants were given new tasks. Road workers were taking temperatures, distributing food or tracing patients’ contacts. I saw a woman explain how to put on sterile clothing in a hospital. I asked her if she was the infection control expert. She replied she was the receptionist, but had taken training.”

“I have talked to lots of people. They really saw themselves as on the front lines of protecting the rest of China. And the world.”

Technology also plays an important role. “They try to literally trace every single contact of all 70.000 cases and process huge amounts of data in doing so”, doctor Aylward says. “We went to Sichuan for example, a vast, rural province, where 5G had been rolled out. We were in the capital, at an emergency center with huge screens. They had a problem understanding one cluster. On one screen, they got the county headquarters. Still didn’t solve it.

So they got the field team. Here’s this poor team leader 500 kilometers away, and he gets a video call on his phone, and it’s the governor.”

Certain media claim this is only possible because China is an autocratic regime, but doctor Aylward disagrees: “I talked to lots of people outside the system — in hotels, on trains, in the streets at night… They’re mobilized, like in a war, and it’s fear of the virus that was driving them. They really saw themselves as on the front lines of protecting the rest of China. And the world.”

Other countries in the region adopted similar strategies. Singapore decided on fast detection and isolation of patients as well. Their contacts were meticulously mapped. People they had been in contact with were actively tracked, tested, quarantined where necessary or followed up in other ways.4 This approach proved three times as efficient as detection of corona patients in other countries .5 Japan, too, opted for a highly targeted approach. The first patients mainly came into the country from China. As soon as a local cluster was discovered in the province of Wakayama, all potential contacts were traced and investigated.6

South Korea, on the other hand, hesitated and only started testing with the epidemic in a relatively advanced state. But as soon as testing started, it was done on a massive scale. Each day, 15.000 to 20.000 people are being tested for the virus. As soon as a patienttests positive, earlier contacts are traced to uncover a potential further spread of the virus. The country does this in a very thoroug way and even uses GPS data from mobile phones.7

Criticism of the Chinese approach

The Chinese approach of the Covid-19 epidemic drew some criticism, especially in its early stages. There was the case of Li Wenliang, an ophthalmologist from Wuhan. On December 30 he sent out a warning to his friends. In his message he mentioned SARS, the earlier version of the new corona virus that caused havoc in China fifteen years ago. Local authorities punished him as they believed he was causing panic.

It is clear that, at the start of the outbreak, serious mistakes were made at various levels of the Chinese state apparatus.  Chinese authorities admit this. President Xi Jinping has criticized the initial decision making at local level. But he added this attitude was quickly adjusted and a sense of responsibility and a drive for collective action quickly appeared. Various individuals have been removed from their functions because they  committed serious mistakes.8

But corrections were made swiftly. The city’s health services were quick to report the virus outbreak to the WHO. The exact type of corona virus was only identified on January 7 and a few days later Chinese health authorities shared the entire genome of the virus, allowing labs worldwide to start working.

Walking on one leg

Apart from the criticism, the Chinese approach teaches us a lot. First of all, it was walking on two legs. On the one hand, it demanded great sacrifice from citizens who were forced to drastically reduce their mobility and social lives, on the one hand. On the other hand, authorities set up an enormous machinery to detect Covid-19 patients as early as possible, to isolate them and trace their contacts. This combination proved successful in other countries as well.

The WHO now finds western countries seeking behavioral change, by imposing social distancing, reducing mobility and placing entire areas under quarantine, but failing  the second aspect: actively searching for and identifying Covid-19 patients. The United States even lack enough test kits but pretend everything is under control.9

The western strategy is seems to balance on just one leg: drastic behavioral change is demanded from the public but authorities don’t take sufficient action to trace the virus. This should not come as a surprise. The Chinese approach requires strong public healthcare equipped at all levels, close to the people, and authorities able to mobilize an entire population.10 This has allowed them to trace Covid-19 patients as vigorous as they have. The same goes for Singapore, Japan and South Korea.

Less so in European countries, where cost reductions and privatizations have undermined  health systems. It is no secret either savage capitalism has affected the American healthcare system even more. Nearly thirty million Americans can’t even dream of affording health insurance. Even if free tests for Covid-19 patients would be available, they wouldn’t be able to pay for treatment.

But, we too are facing a silent dismantling of our public healthcare system and, all too often, profit making is playing a role. The Chinese and Asian experiences show us public health systems are best placed to mobilize the people and resources required at critical times such as during the Covid-19 pandemic.