When the European Parliament votes a dangerous resolution that rewrites history

Shall we soon have to change street names throughout Europe such as the Karl Marx Avenue in Berlin, forbid the sale of t-shirts carrying the portrait of Che Guevara, censor anticapitalist rhetoric, ban from the education programmes aspects that would be considered too positive toward the former communist regimes? This is, in any case, what a dangerous resolution of the European Parliament is inviting us to do. 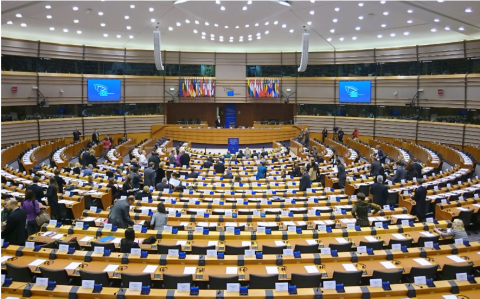 This resolution was adopted on 19 September by a majority combining the far-right, conservatives, liberals, as well as many of the European social democrats and greens. The text calls on member states to “look into Europe’s tragic past”, particularly that of the Second World War “for moral and political inspiration” to condemn current manifestations of fascism and communism, that are lumped together throughout the resolution.

A careful reading of this resolution “on the importance of European memory for the future of Europe” shows that it is nothing short of the political rewriting of European history, with the dual effect of minimizing the rise of fascism and criminalizing the radical left forces.

A resolution that rewrites history

What is striking from the outset is how the resolution cumulates gross historical errors and rewrites history. In the European Parliament resolution, the Second World War is indeed described as “the immediate result” of the 1939 German-Soviet Pact, the non-aggression pact that delayed the German invasion that the USSR would suffer two years later.

By reducing the origin of World War II to the German-Soviet non-aggression Pact, the resolution considers both Nazi Germany and the USSR to be responsible for this global conflict and puts them on equal footing. However, with a few rare exceptions, no serious historian has ever doubted the fact that during the Second World War, the aggressors were Nazi Germany, and fascist Italy and Japan. Members of the European Parliament (MEPs) supporting the text thus contradict even the conclusions of the Nuremberg Tribunal.

On the other hand, the resolution remains completely silent about the very policy of appeasement and conciliation pursued by the liberal ruling classes vis-à-vis Nazi Germany. The text erases the Munich Agreement, though prior to the German-Soviet Pact, that was concluded by France and Great Britain with Nazi Germany and fascist Italy, offering Czechoslovakia to the Nazis. Just as there is no trace of the Anschluss, i.e. the annexation of Austria by Nazi Germany in 1938, accepted de facto by Great Britain and France.

The resolution also remains silent about the indifference or sympathy shown by the Western powers with regard to the destruction of the Spanish Republic in the 1936-1939 period. Not a word either on the recognition of Franco’s fascist regime by Great Britain and France. Massimiliano Smeriglio, MEP of the Italian Democratic Party, although very critical of the USSR, rightly mentions that one must point out, among the causes of the Second World War, “the silent complicity of the liberal State that allowed the development of fascism and national socialism against the workers' movement.”

Finally, the resolution adopted by a majority of MEPs puts on an equal footing those who built the Auschwitz extermination camp and the Red Army that liberated the deportees. It erases the essential role played by the Communists in the liberation of the countries of Europe from the fascist yoke, both within the Resistance movement in the various European countries and through the incredibly high price paid by the USSR and the Red Army. Massimiliano Smeriglio explains : “I have not voted in favour of this text, because the Western democracies, that are our democracies, born in 1945, should thank the Anglo-Americans, the partisans and the Red Army for the final victory. That’s the historical truth.”

The Association of Italian partisans, founded after World War II by antifascist resistants, also reacted : “One and the same motion of censure brings together the oppressed and the oppressors, the victims and the executioners, the invaders and the liberators, while the terrible toll of blood shed by the peoples of the Soviet Union – more thant 22 million dead – and even the symbolic event of the liberation of Auschwitz by the Red army, are forgotten.” In wanting to put fascism and communism on the same footing, the resolution indeed insults the memory and struggles of all those communists, partisans and resistants who sacrificed their lives in the anti-fascist struggle throughout Europe.

Rehabilitation of fascism and anticommunism

The lumping together of fascism and communism is invalid in substance. The fascist ideology is based fundamentally on the idea of a hierarchical order among races and cultures. The Nazis theorized on the fact that there would be “Untermenschen”, i.e. “inferior persons”, non-Aryan, some of whom should be exterminated. Fascism came up with the idea of the necessity to have shocktroops to defend capitalism in times of crisis. Moreover, the support it was enjoying from major German businesses and banks was decisive for the Nazi party’s accession to power. Quite the reverse is true as far as the communist ideology is concerned : it is based on the principles of equality and emancipation for all. It aims to put an end to man’s exploitation by man and is an alternative to capitalism. Thus the exact opposite.

Hence, equating communism with fascism not only means rewriting history, but also de facto minimizing and, in a sense, rehabilitating the fascist ideology at the very moment when fascism is resurfacing all over Europe and is being increasingly normalized by right-wing parties.

Thomas Mann, laureate of the Nobel Prize for Literature, wrote on the subject : “To place Russian communism and Nazi-fascism on the same moral plane, considering that both would be totalitarian, is at best superficial, at worst it is fascism. Those who insist on this equivalence may well boast of being democrats, in truth, and in their hearts, they are already fascists; and certainly they will fight fascism only for form, not out of conviction, while all their hatred will be focused on communism.” It is not by chance that the resolution voted in the European Parliament was promoted, in particular, by Viktor Orban’s party, and that most of the European far-right parties voted for it.

Anticommunism has always been a pillar for all far-right movements, from Hitler in Germany to Pinochet in Chile. The intention is to fight all those who propose an alternative to the capitalist system. This still holds true today. Brazil’s far-right president Jair Bolsonaro is bent upon turning Brazil into a “bulwark against communism” in Latin America. The N-VA [the New-Flemish Alliance, the largest party in Belgium] is inspired by the same hatred when it labels the PTB-PVDA “the residual waste of history”, and so are far-right splinter groups among which Schild en Vrienden, that embark on a hunt against leftist student movements such as Comac (PTB/PVDA students). Whether Marxists, defenders of May 68, trade unions or equal rights activists, all are deemed to be enemies and must be brought into line.

A resolution on the past written for the present

Indeed, the resolution does not just rewrite history, it also calls for the obliteration of all traces of real history and the creation of a new “shared culture of remembrance”. It is not just about condemning communism in its entirety in the past, it is also about preventing today’s emergence of any left-wing force that would challenge the system.

In order to achieve its goal, the resolution goes so far as to effectively call for the destruction of historical monuments celebrating, among others, the contribution of the Red Army to the victory against fascism, to rewrite history courses to rid them of aspects that would be deemed too positive toward past communist regimes, to rename streets, to forbid the sale of items carrying communist symbols...

This resolution contains yet another element whose gravity cannot be ignored; in the name of “democracy”, it legitimizes the totally antidemocratic ban on communist organisations that is underway in certain EU member states and paves the way for an intensification and a generalisation of this trend. In countries where such laws are in place, communist parties and organisations are assimilated to neo-Nazi forces, even though they are their foremost and staunchest adversaries. Unsurprisingly, it is often the same countries that openly rehabilitate fascist war criminals and present them as valiant national liberators.

Finally, the resolution goes as far as to stipulate that a new civilizing mission be carried out by the European Union. The latter should “safeguard and promote” democracy, within as well as outside the boundaries of its territory. The very same rationale has been at the basis of Western military intervention all over the world. It was also in the name of this civilizing mission that colonial crimes were perpetrated. Would the European Union grant itself the right to intervene anywhere in the world, militarily if necessary, in the name of “democracy”?

If we consider this in the context of the rise of the far-right and fascism throughout Europe, then, in reality, this resolution, apart from being a sheer falsification of history, is especially dangerous from a political point of view. It must be understood in the context of the process of normalization of fascism and fascization in our countries. The PTB-PVDA has of course voted against this text and will continue the figth against fascization, both in Belgium and in Europe.