Who was Patrice Lumumba?

Lumumba is a symbol of the Congolese people's struggle for independence. In Africa, he is put on an equal footing as all the major leaders in the fight against colonialism. But who was Patrice Lumumba and why is it so important to keep his memory alive? 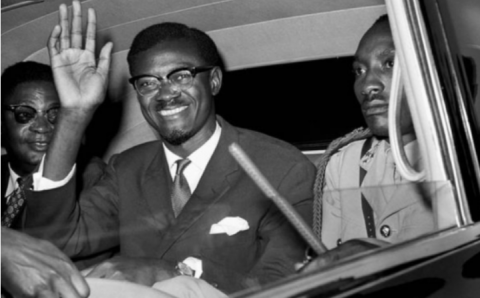 Born in 1925, Patrice Lumumba starts his career as an employee, then becomes a journalist. He is what the colonizer called an "evolved", i.e. a Congolese who adopted the "white manners".

In 1956, he writes the book "Le Congo, terre d'avenir, est-il menacé?" (Is the Congo, land of the future, threatened?). There's a quote from Baudouin, then King of Belgium: "The Belgians and Congolese are all citizens, just like the Walloons and the Flemish, and must live side by side in an atmosphere of frank fraternity." Four years later, under the influence of other African leaders and in response to the manifest reluctance of the Belgian colonial authority to recognize the sovereignty of the Congolese people, Patrice Lumumba realizes the truth: In a colonial regime, equality between Congolese and Belgians is a decoy. He becomes a fervent advocate of Congo's independence.

In reality, colonisation is the exact opposite of what Baudouin was saying. In the 1950s in the Congo, the average wage of a white worker is fifty times higher than the average wage of a Congolese worker. From 1885 to 1960, the Belgian financial elite stripped the Congo of its natural resources, giving little in return. At the independence, the country has no more than 16 Congolese academics and a largely export-oriented infrastructure.

Also in the 1950s, an anti-colonialist emancipation movement is sweeping through the colonies of Africa, Asia and Latin America. From 1954 to 1962, the Algerian people wages a liberation struggle that will exhaust the French colonists and result in the Algerian victory. On January 1, 1959, the Cubans oust the dictator Batista who had ruled their country on behalf of the United States. After the Second World War, the Soviet Union gained in prestige and supported everywhere the struggles for decolonization.

After 80 years of occupation, under the influence of anti-colonial struggles elsewhere in the world, resistance is taking place in Congo too. On 4 January 1959, thousands of Congolese take to the streets of Leopoldville (now Kinshasa) to demand their country's independence. The event is a huge success but ends in a bloodbath. This repression is ordered by the Belgian government. The security forces go on a two-day rampage, killing 300 demonstrators. The colonial system thus signs its death warrant. The news is spreading across the country. Everywhere, the Congolese population is boycotting the colonial administration and refusing to pay their taxes. The year 1959 is marked by revolt.

It is in this context that the Belgian colonial power announces the organisation of the first national elections in Congo in 1960. They should be organised as early as May and pave the way for the independence. By organising elections in the very short term, the Catholic-Liberal government of Gaston Eyskens hopes that it will be above all politicians who are loyal and docile to the colonial authority, who will win. The plan of the Belgian power? This actually means keeping control, hiding behind a façade of independence. However, against all the odds, the party alliance around Lumumba wins 71 of the 137 seats, giving it a majority in parliament. In the Senate, the same alliance is two seats short of a majority because 23 of the 84 senators were not directly elected. They are local leaders who generally cooperated well with the colonial authority.

Patrice Lumumba is forced to form a coalition. His rival, Joseph Kasa-Vubu, supported by the Belgian government, becomes president. Lumumba takes over as Prime Minister. On Independence Day, 30 June 1960, King Baudouin delivers a speech in which he praises the "great work" initiated by his great-grandfather Leopold II, this "civilizer". Lumumba responds with a historic speech in which he expresses the feelings of the Congolese people. He describes the colonial regime as "humiliating slavery" and recalls the racism and the brutal repression of any resistance.

The idea of a truly independent Congolese government is intolerable for the Belgian capitalist groups. In a confidential note from the Economic Round Table, which brings together Belgium's top political and economic leaders, we read the following: "Once the Congo gains independence, it will be forced to ask us for economic aid. This puts us in an advantageous negotiating position, both in financial and personal terms." It is therefore a question of defending the interests of Belgian capitalist groups.

Just ten days after independence, the Lumumba government faces an attack by 10,000 Belgian soldiers in the port city of Matadi, after Belgian General Janssens provoked riots in the capital. On 11 July, the rich province of Katanga secedes, with Belgian military support and under the impetus of Union Minière (now Umicore), a Belgian multinational whose stronghold is Katanga.

After two months of resistance against this war of Belgian reconquest, President Kasa-Vubu, pushed by his Belgian advisers, dismisses Prime Minister Lumumba, who was opposed to this decision. Subsequently, colonel Mobutu will also overthrow the President and replace him with a college of commissioners. Mobutu, with the help of the United States and Belgium, will eliminate the entire Lumumbist movement by military means and then, five years later, establish a dictatorship that will last 30 years.

This support for Mobutu enables the United States to establish a strong presence in Central Africa. This favourable position will serve them throughout the Cold War to fight left-wing liberation movements in southern Africa and, in particular, in Angola and Rhodesia (now divided into Zambia and Zimbabwe). During the thirty years of Mobutu's dictatorship, the United States will make people somewhat forget Belgium's role as the country's true neo-colonialist masters. The Belgian Christian Democrat Prime Minister Wilfried Martens, however, will state in March 1981 : "I love this country, its people and its leaders."

Lumumba is placed under house arrest and flees on 27 November 1960 to Stanleyville (now Kisangani), 2,300 kilometres inland. It is home to members of the national army, more than half of whom have remained loyal to the central government, as well as most of the supporters of the deposed Prime Minister. On the way, he is stopped by Mobutu's soldiers.

Mobutu decides, at the insistence of Belgian and American advisers, to hand Lumumba over to the leaders of the secessionist province of Katanga, to be executed there. Patrice Lumumba is thus assassinated on 17 January 1961, in the presence of Belgian officers. The involvement of Belgian officials, up to the highest level, has been confirmed by a Belgian parliamentary commission of inquiry in 2000. In its conclusions, however, the commission is careful not to point to those directly responsible, but rather refers to a "moral responsibility of the Belgian state". However, the investigation into the murder of Patrice Lumumba reveals many well-known names, including those from the same reactionary circles that, ten years earlier, had ordered the assassination of the Belgian communist Julien Lahaut : Pierre Wigny, Albert De Vleeschauwer and André Moyen.

Patrice Emery Lumumba and his ideal of a strong, independent and prosperous Congo remain an important source of inspiration today. Not only for the Congolese themselves, but for all those who consider the right to independence of all peoples as a human right.

"Men and women of the Congo, victorious independence fighters,

I salute you in the name of the Congolese Government.

We are deeply proud of our struggle for independence, because it was just and noble and indispensable in putting an end to the humiliating bondage forced upon us.

(...) Morning, noon and night we were subjected to jeers, insults and blows because we were "Negroes". (...) Who will ever forget the shootings which killed so many of our brothers, or the cells into which were mercilessly thrown those who no longer wished to submit to the regime of injustice, oppression and exploitation? (...) Together we shall establish social justice and ensure for every man a fair remuneration for his labour."