"You leave ManiFiesta with more energy than when you arrived"

ManiFiesta, the solidarity festival organized by Solidaire and Medicine for the People, was born in 2010, in the midst of a political crisis in Belgium, against a backdrop of rising nationalism. Almost ten years later, ManiFiesta still promises to be a moment of solidarity and struggle against the far right and division. Meet ManiFiesta director Mario Franssen. 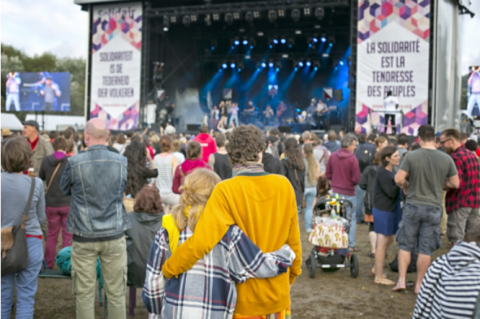 Mario Franssen. ManiFiesta wants to point out that, everywhere, the problems of workers, ordinary people, are the same. ManiFiesta's program reflects the same diversity as our society. As for music, there is something for everyone, from Salvatore Adamo to HK & Les Saltimbanks, from Anglo-Iraqi rapper Lowkey to the Hispanic beats of Amparanoia and Goran Bregovic, the master of Balkan folk music. There will be debates on feminism, the future of the EU, the struggles in Latin America and the social struggle in our country. We are setting up a trade union square, a health square, an international village and, for the first time, a Plaza Feminista. We invite speakers from all over the world, workers, artists, intellectuals...

Which speakers or concerts do you most want to listen to?

Mario Franssen. We have 160 events over two days that are all really worth it. There are the debates with Aminata Traoré, Juliana Lumumba, Dilma Rousseff and the former Cuban Minister of Culture, Abel Prieto. I also like the committed music of HK and Lowkey. Or take Amparanoia, for example, which will close the festival on Saturday evening. She is an artist who is also a feminist activist, so we asked her to participate in a debate - just like Lowkey. Bringing down the divisisons between culture, content and politics is the essence of ManiFiesta.

The name says it all: manifestation, and fiesta.

Mario Franssen. Absolutely, you come to ManiFiesta for both aspects. The festival takes place just before the start of the political season. ManiFiesta also wants to play a role in this respect, and show people that they are not alone. That's why we are inviting representatives of successful struggle movements, such as Adriana Alvarez, an American trade unionist who successfully fought McDonald's, where she works, to get wage increases and is co-leader of the campaign for a minimum wage of $15. With ManiFiesta, we want to boost the social struggle and make sure that people leave with more energy than when they arrived.