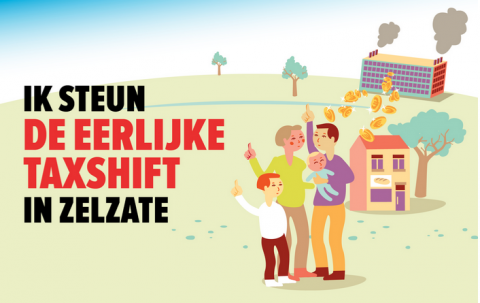 One year ago Zelzate made history. In the heart of the Ghent canal zone, a coalition between sp.a and PTB-PVDA came into being for the first time. This was the result of many years of struggle carried out by the PTB-PVDA and its doctors of Medicine for the People for better living conditions.

The progressive municipal government immediately announced that it wanted to make a break with the political privileges and squabblings of the past: the Coalition of the Future abolished two alderman's posts, the mayor gave up his official car and the PTB-PVDA alderman for Social Affairs handed over his office to the local branch of the public employment service that was going to lose its premises there, which would have forced the inhabitants to travel a lot further.

These were much-needed savings in order to allow the social service to get back to breathing space, for it had been submitted to severe budget cutbacks in previous years. And the result: Zelzate is now dedicating an extra 100,000 euros to the fight against child poverty and to help more people find a job. Four additional community workers will also be deployed.

Getting rid of neo-liberal austerity policies

After a year of hard work, the left-wing board has now finalized its Plan for the Future. The young team is bursting with ambition and is putting an end to the neo-liberal austerity policies. While other municipalities are cutting back on staff or increasing taxes, Zelzate has opted for new investments, a fairer distribution of the charges and more participation.

"Just like other municipalities, Zelzate lacks financial means," explains Geert Asman, PTB-PVDA alderman for Finance. “The resources from the municipal funds are insufficient to meet the basic needs of the inhabitants. "Over the next few years, the costs of pensions will increase, and contributions for waste processing and the police will also rise sharply. The income from the additional personal income tax is under pressure due to the many benefits that have been accorded to employers in recent years. These are all costs over which the municipality has little or no influence. "So we've seen to it that the best use is made of every euro we will spend in the multi-year plan."

But how does Zelzate want to make a change? By adjusting the corporate tax. A municipality is authorized to levy taxes on its own territory. Therefore, the left-wing government has chosen to implement a "fair tax shift". Not a tax shift that gets the money out of the workers' pockets. But a truly fair tax shift, which will get the money from large companies and multinationals.

The stronger the shoulders, the heavier the burden

The fair tax shift in Zelzate will be made possible by adjusting the rates of the existing area tax. Small and medium-sized businesses (up to 5,000 m²) will get an annual 100 euro discount. In doing so, the PTB-PVDA is fulfilling an electoral pledge. Only the largest companies and multinationals will be charged an extra contribution. The new area tax will yield an additional 420,000 euros. While this is a trifle for large companies, it makes a world of difference for a poor municipality like Zelzate. The large multinationals will only contribute 0.09% of their profits to this tax.

The proceeds from this tax will go to a clean and well-maintained municipality. The sideways will be made safe and easily accessible for people with reduced mobility. 250,000 euros annually will be set aside for this purpose. The municipality will also allocate extra resources to the fight against global warming. Zelzate is committed to 100% renewable energy. Over the next six years, 12,800 trees will be planted, one per inhabitant.

Getting rid of an anti-social waste disposal tax

For years now the PTB-PVDA, together with the inhabitants of Zelzate, has been engaged in the fight against an antisocial waste disposal tax introduced by the previous liberal government. Thanks to the fair tax-shift, this anti-social tax amounting to 55 euros can be gradually withdrawn. It will be halved by 2022 and will be completely abolished in 2024. This way, the Future Coalition is fulfilling its pledge to reduce taxes for the residents.

Moreover, there will be no increase in the charges for household waste collection in 2020. "We have made the choice to let the strongest shoulders carry the heaviest charges," states PTB-PVDA alderman Geert Asman.

The Zelzate government wants to make a break with the past in yet another way. From now on, green space maintenance will again be carried out under its own management. Extra personnel and materials will be made available. As the private sector was charging high rates for mowing public property, this will provide the municipality even with a modest saving. The board is also rescinding the privatisation of the cleaning service and of the road maintenance.

The fact that the Zelzate Coalition of the Future is working on this today is no coincidence. Under the previous municipal administration, the PTB-PVDA and the local sp.a section already joined forces in the fight against privatisations. Today, the fight for strong public services is continued with from within the municipal government.

The opinion of Zelzate’s citizens

The implementation of the fair tax-shift will not happen by itself. Rich multinationals and employers' organisations have already announced that they will oppose the tax-shift with all possible means.

Therefore, the PTB-PVDA aldermen Geert Asman and Steven De Vuyst called on the population of Zelzate to come in massive numbers to the city council meeting on 30 December. A poster campaign has been launched among the Zelzate middle-class to obtain their support for the fair tax shift.

In January, the College of Aldermen embarked on a tour of the neighbourhoods with its Plan for the Future. This is also the starting shot for new neighbourhood councils, meant to ask Zelzate’s inhabitants’ opinion on essential investments in their neighbourhood. And to call on the people to put pressure on the multinationals to pay their fair share.