In Spain, every "Monday in the sun" for fair pensions

Head-on attacks on public pension schemes are a reality in many EU member states. In Spain, the pensioners' struggle began in 2011 and is still ongoing. Every Monday, Spanish pensioners take to the streets. They celebrate the "Mondays in the Sun" to demand fair pensions. (Photo: meeting at Baracaldo, Bilbao.) 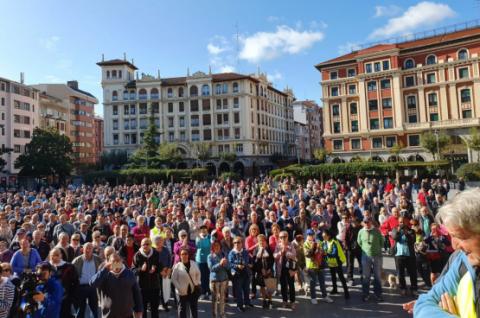 They have been doing this for years, although it is especially in early 2018 that their movement has gained momentum. Every Monday, Spanish pensioners gather in many towns and villages in Spain. They demand the right to a decent pension that is sufficient to live on. In Spain, more than 5 million pensioners have a pension of less than 700 euros. Receiving the minimum pension in Spain means surviving on 599 euros per month. And the average pension is currently 970 euros. With such amounts, you have to count every day in order to know how to pay the rent, electricity, water or food. So it's not surprising that Spanish pensioners are taking to the streets. From Bilbao to Seville, via Madrid or Segovia, they can be found celebrating the "Mondays in the sun", concentrations of hundreds of people in front of local and regional governments.

It all began in 2011, when the Socialist government of José María Rodríguez Zapatero introduced, at the hardest moment of the crisis, a labour reform that not only meant the gradual increase of the retirement age from 65 to 67, but also the obligation to have contributed for at least 25 years (previously 15 years) to have access to the calculation of the contributory pension. Not satisfied with this punishment for workers, the government has taken a new step, the most detrimental for pensioners, with the introduction of the "sustainability factor", which implies that the amount of the pension will depend on external factors.

A year later, with the new right-wing People's Party government, the attack on pensions is further strengthened. It was first decided that pensions would no longer be indexed to the cost of living, but on the basis of a fixed percentage of 0.25 %. Second, to develop this "sustainability factor", the government of Mariano Rajoy has linked the value of the pension to the life expectancy of workers.

That was the year in which the movement to fight for the pensions began. Major mobilizations are taking place across the country. Pensions have since been defended tooth and nail. Two factors reinforce mobilization. The first is the high number of pensioners in Spain, which currently stands at around 8.5 million people. The second factor is that, since the crisis, and due to the high percentage of unemployment (currently at 14.1%, with a youth unemployment rate of 32.8%) and precariousness, many Spanish families have been surviving on a pension income.

At the beginning of 2018, after some very difficult years for Spanish workers, who have suffered all the blows of the crisis and the austerity, the pensioners receive for the fifth consecutive year a letter from the Social Security informing them that their pension will increase by just 0.25%. That was the last straw and since then, the pensioners' movement has not known a truce. Under the slogan "gobierne quien gobierne, las pensiones se defienden" ("no matter who governs, pensions need to be defended") , they are on the streets. As a result of this pressure, they have won victories, with the government agreeing to adjust pensions to the consumer price index for the next two years and forgetting the pitiful 0.25%.

Just a few months ago, the various local pensioner organisations, organised under the aegis of the "Coordinadora Estatal en Defensa del Sistema Público de Pensiones", made their voices heard in a spectacular way. They travelled to Madrid on foot and from various points on the Iberian Peninsula, sometimes covering more than 700 km. On October 16th, thousands of pensioners took to the streets to demonstrate in front of the Congress of Deputies and state authorities, demanding a minimum pension of 1080 euros and demanding the elimination of the "sustainability factor" . They succeeded in imposing the theme of fair pensions during the negotiations to form a government between the Socialist Party (PSOE) and Unidas Podemos.

The fight goes on

But the battle doesn't stop. Due to the application of the "sustainability factor", new pensioners will receive 22 euros less per month from January 2020. In addition, the indexation of pensions, as in Belgium, does not correspond to the real cost of living. The Consumer Price Index (CPI) does not represent what it really costs to live in Spain. As a result, the Pensioners' Network explains that "it is the actual consumer price index that should be applied, taking into account factors such as the cost of electricity and heating in the calculation".

The minimum pension calculated in accordance with the European Social Charter is not the only basic demand of Spanish pensioners. They also call for the retirement age to be reinstated at 65. They want to work for a living, not die at work. But above all, they defend the protection of the public pension system. They defend the pension as a real right, as a right to dignity, and they are determined to continue to gather every Monday in the sun, rain or snow to win their case.