The PTB welcomes the agreement obtained on 19 November in the parliamentary working group, setting up a “healthcare workers fund” to respond to the demands from the healthcare sector. (video) 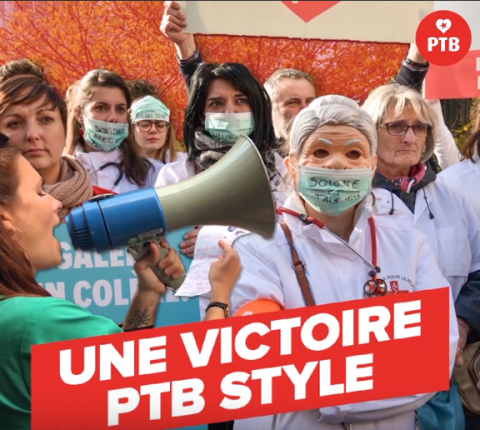 « The real power, the real correlation of forces, is not found in Parliament, but on the ground. When there is a popular will, nobody can keep us back. »

The PTB welcomes the agreement obtained 19th November in the parliamentary working group, setting up a « healthcare workers fund » to respond to the demands from the healthcare sector.

« The most important was that the supplementary budget of 67 million euros for the year 2019, made available following the amendment introduced by the PTB and approved end of October, could quickly arrive where it is needed, on the ground, commented Raoul Hedebouw, PTB group leader at the Chamber of Deputies. With these means, we offer a bit of oxygen to the healthcare personnel, who are collapsing under the work pressure. It’s an important victory for the healthcare workers, obtained thanks to their mobilization during months. »

In the video, Raoul Hedebouw explains how the emergency fund for the healthcare workers has been won in Parliament. (Click on the picture below to go to the video)