Privatisation is outdated: the future is public!

What does the shortage of nurses has in common with the increase in our electricity bills? These are the perverse effects of privatization. In recent decades, public companies have been sold to the private sector by our governments, with disastrous consequences. All over the world, citizens are mobilizing to take these companies back in hand. With victories in hand. 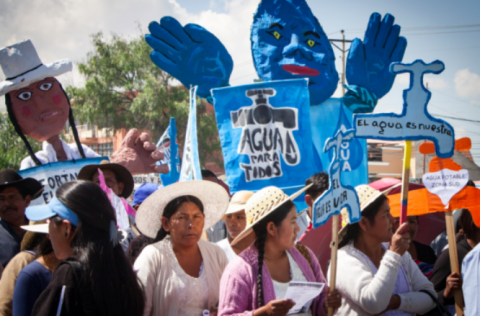 The health care sector is suffering from a glaring lack of investment for years. With increasingly harsh working conditions, qualified personnel prefers to look for work elsewhere: the average length of a career for a critical care nurse, for example, is only seven years.

In addition, between 2007 (when the electricity market was liberalised) and 2019, the price of electricity increased by 66 % in Belgium. An all-time record. In these times of crisis, more and more people are unable to pay their energy bills.

A coincidence? Far from it: in these sectors, as in others, citizens suffer the adverse consequences of privatization. But privatization also means resistance: people don't let themselves be fooled, and are successful in their struggles for public management.

A return to public management around the world

New public services are also emerging, thanks to the mobilization of citizens. According to the think tank Transnational Institute (TNI), there have been more than 1,400 successful (re)municipalisations in recent years. They took place in more than 2,400 cities in 58 countries.

Each time, these initiatives have benefited citizens. Reduced costs, improved services, better working conditions... When a company or sector returns to public ownership, it has a positive and concrete impact on people's lives.

Not surprisingly, the TNI study shows that, in the overwhelming majority of cases, working conditions after remunicipalisation improved. In particular because there is more consultation with the trade unions. Workers are better paid and better protected than when they worked for private companies.

But more surprisingly, the report shows that remunicipalisations also promote democracy. In Sacramento, California, for example, members of the board of directors of the state-owned electricity supply company are elected directly by the city's residents. Each district elects one member every four years. Applicants send a short biography and three priorities. Users receive a ballot at home or vote via the Internet. All board meeting documents are available and meetings are broadcast online.

The example of public Internet access in the United States

In the United States, some local authorities have decided to take over the distribution of Internet access themselves. The three private companies that dominate the American market want to make a profit at all costs. As a result, they are increasingly moving away from poorer and rural areas. AT&T, the largest DSL (internet via telephone line) provider in the United States, for example, has prioritized network modernization in the wealthiest regions. Low-income populations have to make do with outdated technologies.

In these abandoned areas, the authorities have chosen to put their hands back on Internet access so that everyone can benefit from it.

In 2009, in Lafayette, Louisiana, the state-owned company LUS Fiber began providing Internet service to the 130,000 residents. This company offers a very wide range of services such as HDTV, video on demand, and high-speed internet for individuals and businesses up to 1,000 megabits per second. Services equivalent to those offered by large commercial companies.

In the city of Chattanooga, Tennessee, the publicly owned EPB is the first in the United States to offer Internet speeds of 1,000 megabits per second to more than 175,000 homes and businesses. LUS Fiber and EPB therefore provide high quality services at lower prices than those charged by the three major US telecommunications companies. Compared to what we do at home, EPB offers, for 57.56 euro per month, a throughput of 1,000 megabits per second.

In Belgium, for 60 euro per month, Proximus offers a maximum speed of only 100 megabits per second. Same price, but a service ten times less efficient. Painful when we know that the Belgian government has decided to privatise Belgacom (former name of Proximus) and to sell half of the capital of the public company "to improve the quality of the service"...

These advances did not happen by magic. It was popular mobilization that made them possible. A telling example is the water war in Bolivia. Between January and April 2000 (before the election of left-wing president Evo Morales), a series of social mobilizations took place in Cochabamba, Bolivia's fourth largest city. The municipal water management system was sold to the US multinational Bechtel, and the price of water doubled. (see a demonstration on the photo-

Associations, trade unions and workers organized large demonstrations. A social revolt which was already germinating after years of government inaction. Despite violent repression, the social movement succeeded in bringing the Bolivian government to its knees. All claims were accepted. The contract with the US company Bechtel was cancelled, and water management came once again in the public domain. This struggle has become a global symbol of resistance to the appropriation of public services by multinationals and their thirst for profit.

In 2016, the city council of Valladolid, Spain, also decided to remunicipalize water under citizen pressure. Private management had increased the price of water so much that it had become unaffordable for poor households. Yet water is a basic human right.

The future is public

Struggle pays. Without the mobilization of Bolivian citizens for the return of water to the public domain, many people would still be deprived of this fundamental right. Without the mobilization of US citizens, many families in the US would not have access to the Internet (or would have access to a very poorly performing Internet). An aberration, especially in the midst of a pandemic, when keeping in touch with loved ones via social networks is vital. And all because of the thirst for profit of private companies.

The TNI study shows how beneficial it is to keep sectors in the public fold. Public management simplifies and unites structures and workers around the same goal: providing a public service.