8 March: we are still fighting for bread and roses

With Marianne, the women's organisation of the PTB, we held actions on 8 March. For a minimum wage of 14 euros, for a real handling of violence against women and for a real decriminalisation of the right to abortion. Photo: Maartje De Vries, president of Marianne 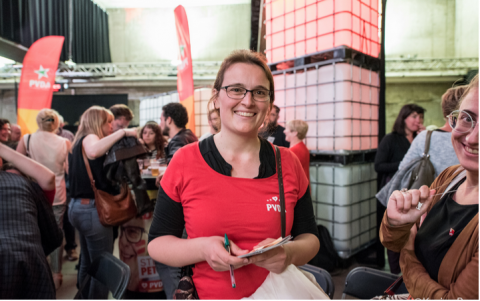 When people ask me why the International Women's Rights Day, March 8, is still relevant 100 years after it was first celebrated, I don't have to think twice. The fight for equality remains an absolute necessity, for the good reason that inequality is still important, and that it is structurally rooted in our society. Because the coronavirus crisis is exacerbating inequality, and the so-called feminist government is pursuing policies on many fronts that will only exacerbate inequality. With Marianne, the PTB women's organisation, we therefore carried out actions on 8 March. For a minimum wage of 14 euros, for a real handling of violence against women and for a real decriminalisation of the right to abortion.

The pandemic reveals the invisible work of women

On average, in Belgium women earn 23.7 % less than men. Often because they are forced to work part-time. Because they do most of the tasks in the home, care for their loved ones, or because they cannot get a full-time contract. This wage gap also means a pension gap.​ Women's pensions are on average 34 % lower than those of men. One in three women has a pension of less than 750 euros.

In addition, our society remains steeped in sexism, sexual violence, domestic violence and countless other forms of inequality and discrimination.

The pandemic is having an impact here as well. It brings to light the invisible and undervalued work of women. The working class has kept and is still keeping the country standing. Many of the sectors that have continued to operate are typically female sectors such as health, cleaning, distribution... These women are on the front line against the virus and face high risks, often for very low wages. During the pandemic, many people lost part of their income. This will increase the financial inequality between women and men. Women lost twice as much income as men in the second quarter of last year. It hurts, especially when you already have a low salary. One of my friends, Tine, is a household help.​ She earns a meagre 11.5 euros an hour. Every month is a puzzle to make ends meet. Since the outbreak of the virus, she has had to be quarantined several times. Every euro she loses weighs heavily on her livelihood and that of her children. The need to increase the minimum wage is obvious. Everyone has the right to a decent income. During the elections, many promises were made in this regard, but today we have yet to see the results. That is why I campaigned on 8 March for a minimum wage of 14 euros an hour. This would be a good thing for all working people, especially women.

Confinement increases intra-family violence. Since the beginning of last year, in Belgium there have already been at least 29 feminicides. In "normal times", it is estimated that one in five women would be abused by their partner. A study by the University of Liège shows that domestic violence increased by a third during the coronavirus period. However, we are still waiting for a real coordinated approach to the problem of violence against women. That is why I campaigned on 8 March for a real action on violence against women.​

And then there is the right to abortion. This right is fiercely fought against, both internationally and in Belgium. This right is always the first to be sacrificed when the conservative right has its say. In 2019, several parties have introduced a bill to decriminalize abortion and extend the legal time limit. Although a majority of parliamentarians in the Chamber of Representatives is in favour of this proposal, it has been used as a political bargaining chip in government negotiations. All but one of the parties in the government support the proposal, but it has been put in the fridge. It is incomprehensible that the so-called ethically progressive parties are bending to the will of the CD&V (Christian Democrats) and sacrificing women's rights to participate in government. The 500 women who go to the Netherlands every year to have an abortion after 12 weeks are therefore left to their own devices. These are often vulnerable women who are left to fend for themselves. Together with Marianne and the PTB, we continue to defend this bill. That is why I campaigned on 8 March for abortion to be decriminalised once and for all, and for the deadline to be extended to 18 weeks.

We are still far from a society where equality exists.​ But the struggle pays off. Women in Argentina prove it. Their hard-fought struggle resulted in progressive abortion legislation. The strong feminist movement against violence against women in Spain has forced the adoption of strong legislation to combat such violence. In our country, the nursing staff fought for an agreement worth a billion euros, for more staff and higher wages. We can win.