Condemnation of the President of the FGTB and sixteen trade unionists : a serious impediment to democratic rights

Thierry Bodson, the president of the FGTB (socialist trade union), and sixteen other trade unionists were sentenced today for "malicious obstruction of traffic" to suspended prison sentences and fines ranging from 600 to 4,800 euros by the Liège criminal court. Thierry Bodson gets a one-month suspended sentence. 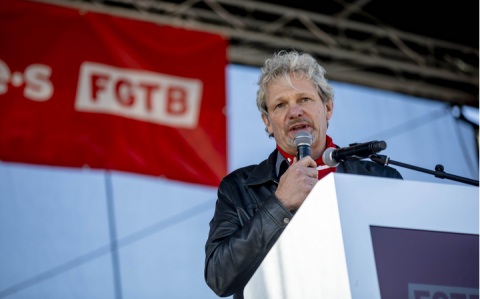 "Today, in addition to the 17 condemned trade unionists, it is freedom of social action that has been condemned," reacted Raoul Hedebouw, national spokesman of the PTB-PVDA. “After the conviction of the president of the FGTB Antwerp two years ago, this new conviction of trade unionists on the basis of article 406 of the penal code shows how urgent it is to review this article. It's not for the courts to handle labour disputes."

The principle of "malicious obstruction of traffic" is normally used to convict car drivers, driving lunatics and criminals who deliberately obstruct traffic, block vehicles and thus deliberately create dangerous situations. It does not apply to collective actions that impede circulation.

For the PTB-PVDA, the penal code is being hijacked to criminalize trade unionists. Indeed, Belgium's social history is made up of thousands of 'obstacles to movement': demonstrations, picket lines, occupations and actions of all kinds. "Without these barriers, we would never have won the right to vote, the eight-hour day or paid holidays. Without these obstacles, we would not have been able to stop the Michel government's points-based pension," Raoul Hedebouw says.

Beyond trade union action, this condemnation indirectly targets all those who use collective action. "It's not just the president of the FGTB and 16 of his comrades who are being condemned. It's the whole social movement," adds Raoul Hedebouw. "What does freedom of expression mean if there is no possibility of collectively obstructing movement as part of a social action to defend people's rights? It's an empty freedom of speech, reduced to a formal freedom that's harmless to the powerful."

This conviction is all the more worrying because it is not an isolated event. It follows the conviction on 29 June 2018 of the president of the FGTB of Antwerp, who was also convicted of malicious obstruction of traffic for having blocked the port of Antwerp with a picket line, also during a general strike.

"We are very concerned about this decision," concludes Raoul Hedebouw. Workers are victims of a deepening crisis. Social action, the right to strike and the right to picket are tools the social movement must be able to use to defend itself. By condemning the president of the FGTB and the sixteen other trade unionists, they are trying to impose a muzzle on workers. We can't accept it. That is why we call on all the democratic forces in the country to act together to urgently review Article 406 of the Penal Code so that it can never again be used to condemn social action."