"The distribution sector is transformed into a real Far West"

Hundreds of restructuring and layoffs in Match, Smatch and Carrefour stores, a major spontaneous strike at Lidl last year: a real storm hit the distribution sector. 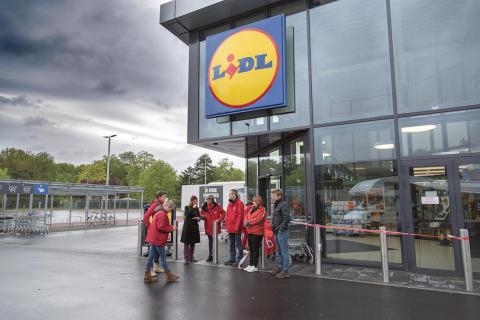 “The sector is in trouble and nothing is going right at Carrefour”, explains Miriam, an employee in a Carrefour Market store. “It's war and we're losing it”, she continues. It is the war between Lidl, Aldi, Carrefour, Colruyt, Delhaize... A war fought on the back of the employees. And it's not at Match and Smatch that they are going to contradict her. Indeed, management plans to close seven Match stores and nine Smatch subsidiaries, 146 jobs in the stores and 64 at the headquarters. All this to save money and compete with each other in a deadly way. At Carrefour, following last year's reorganization, 400 people lost their jobs.

An oversupply in stores of 215%

Miriam explains that the pressure is getting stronger at Carrefour Market. “No one will be granted a full-time contract anymore. No one. Management is constantly recruiting, but each time it is with contracts of up to 30 hours per week and with a maximum duration of two years. It is not with this kind of contract that we will be able to build a future. Who will still want to do this work? For us elders, all this is difficult to bear. There are many cases of burn-out. The atmosphere in the Carrefour Market today has nothing to do with that of the era of the Hyper Carrefours. They now save money on everything. In the past, we received 25 euros for our work clothes. Today, this is over, and when we ask them the question, they reply: "That was in the days of the Hypers, now it's Carrefour Market".”

Trade union secretary Erik Dirkx (BBTK, the social-democratic public sector trade union) also notes that the big retail chains are literally waging war against each other. “All the major chains already have stores in Belgium and yet new ones are constantly being opened. In some cities of barely ten thousand inhabitants, there are up to eight different brands. That's way too much. “Sometimes the situation becomes totally out of control”, reads the website retaildetail.be, 'for store keepers, retailers and all those involved in retail trade' in an article dedicated to the arrival in Belgium of the Dutch chain Jumbo. Of the five stores that the chain plans to open in Belgium in the coming months, one of them will be located in the municipality of Pelt, just next to Albert Heijn and Aldi, while a little farther away Alvo, Colruyt, Delhaize, Peltri and Lidl are also already established. According to RetailSonar's calculations, once this new store opens, the saturation rate in the area will reach 215%. Competition will be extremely fierce.

At Albert Heijn, half of the staff are temporary employees or students

If competition is the very essence of capitalism, we are faced here with a real jungle. For Erik Dirkx, “the sector is transforming into a Far West where everything is allowed. Sunday opening, flexi-jobs and student work up to 500 hours a year, so that on Sundays most brands mainly run on job students. At Albert Heijn Belgium, half of the staff are temporary employees or students. And with the advent of e-commerce, night work is now possible. With all this flexibility, the government has ensured that the cowboys in the sector have every chance and that the others will disappear. With most of the major chains, it was still possible to conclude relatively 'fair' agreements, but these chains are now at a competitive disadvantage, while the new ones, which do not give a damn about anything, have an advantage.”

In the sector, there are fears that Jumbo's arrival on the Belgian market will exacerbate the war between the various brands and that, once again, it will be the workers who will pay the price. As the African proverb says, “when elephants fight, it is the grass that suffers”.

What is the government doing in this whole thing? For Erik Dirkx, “the government only increases flexibility”. “In the area where I live”, he continues, “a supermarket informs its students on Friday, via a WhatsApp group, that it will need two substitutes for the weekend, for example. The fastest to react have the job. On-demand contracts, also known as 'zero hour contracts', which were created in the Netherlands, now also exist here. They are illegal, but the government is letting them happen. We can no longer speak of a rational economy, all this is purely ideological, it is the principle of an economy that would operate 24 hours a day, seven days a week.”

The spontaneous strikes at Lidl's, or the beginning of a counter-power

What needs to be done to ensure that employees, especially female employees, in this sector can once again be entitled to a decent wage and decent working conditions? For Erik Dirkx, “the unions are trying to set up a counter-power at the grassroots. But it is not easy. Even if the unionization rate in the sector is quite high, mobilizing people and involving them in actions is difficult because they work in isolation. Hema, for example, has about 100 stores, but most of the time only five or six people work there, some of whom are temporary or have a temporary contract. For the base to react, the cup must generally be really full, as at Lidl last year when staff went on spontaneous strikes and a real tidal wave broke out in almost every Lidl store in the country. In the end, the workers won the battle and obtained from management that additional staff be hired. We are also trying to conclude the most appropriate agreements possible at sectoral level and, with these agreements, we are trying to force the cowboys in the sector to guarantee humane working conditions in their stores.”