A hot social autumn for the Flemish government

Public transport on strike, actions in the cultural sector and at the VRT (the Flemish public broadcaster)... The austerity policy of the Flemish government led by Jan Jambon (of the right nationalist New Flemish Alliance party N-VA) and his attempt to harness the arts and culture are not accepted. And resistance is growing. 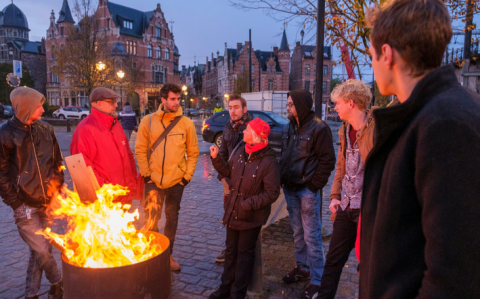 De Lijn : in defence of a high-quality public transport

This Wednesday, November 13, the workers of De Lijn, the regional Flemish public transport agency, were on strike at the request of the CGSP (socialist trade union of public services). Drivers of the different trade unions joined the strike that had a high level of participation. At stake: the damage caused by years of austerity imposed by consecutive governments on the working conditions in public services. “We’re not asking for the moon, not even for higher wages, we simply want to be able to do our jobs in comfortable conditions”, said a driver and union delegate.

This permanent austerity has led to a shortage of staff which prevents the drivers from knowing their planning in advance, from taking holidays correctly, and puts an unbearable stress on the staff. Jos D’Haese, leader of the PTB-PVDA group at the Flemish Parliament, visited the picket lines: “They are quite right. Whoever takes the bus or tram knows that the austerity is destroying De Lijn. It’s time to invest in good public transport.”

“Respect for the workers of De Lijn, who are struggling today for good public transport for all of us”, he continues. “Minister Lydia Peeters wants to undermine the right to strike by imposing a minimum service. However, the current offer is already a minimum service. Only yesterday, I had to wait for a bus that never came. This strike aims precisely to make a maximum service possible for the users, with good working conditions for the drivers.” The member of parliament also denounces the real aim of this destruction strategy of the public service, i.e. privatisation.

Artists against a culture based on money and on nationalism

The day before the De Lijn strike, the Beursschouwburg (Flemish cultural centre in Brussels) drew a crowd of 2,000 people belonging to the cultural and artistic world. Actors, directors, musicians, technicians, journalists… listened to and supported the call for solidarity between the arts and the social sector.

The meeting was called upon following the announcement made by Jan Jambon - also Minister of Culture in his government – of a 60% reduction in subsidies for artistic projects. This represents a threat to a lot of artists and institutions whose subsidies could possibly be sacrificed, especially those who develop a critical and innovative art. The culture houses will have to cut down on the number of productions, dismiss staff or save on personnel costs and the relation with the public.

On the other hand, the Jambon government wants to promote its famous Flemish 'canon'. The ideological aspect of this attack is obvious, it aims to straightjacket a cultural and artistic sector which is not sufficiently in line with the nationalist ideology of the N-VA.

On the other hand, the Flemish government continues to inject more public money into, amongst others, the Phoebus Foundation, the very rich foundation which manages the private art collection of multimillionaire Fernand Huts -who is close to the N-VA.

An appeal has therefore been launched to take action, from November 14 onwards, in front of the Flemish Parliament, and also at the beginning of December, to coincide with the date chosen by the VRT trade unions to organise a day of action.

The VRT does not want to be a propaganda tool

The Flemish government of Jan Jambon has launched an offensive against the the audiovisual public broadcaster VRT. With budget cuts in the amount of 44 million euros in total and the intention to control the contents, which seems to indicate that it wants to silence the critical voices and to use the public service to promote the nationalist ideology.

“Two things have proven very shocking to us, underlines Carlos Van Hoeymissen, from the ACV (christian-democratic trade union) Transcom VRT. Firstly, it’s the scale of the cutbacks that amount to a total of 44 million. It’s an enormous blow, that is affecting the VRT and its staff even more than the savings of previous years. Secondly, it’s the control on the content, while the management contract guarantees our independence. Hence, on December 5 we will undertake a positive action by demonstrating in front of the VRT, for its independence and for sufficient financing. We also want to show in a positive manner everything the VRT does and what it means for society. This way, we want to unite the people.”

CGSP (socialist public sector trade union) VRT chairperson Michelle Graus: “We want to indicate clearly to the Flemish government that it is not only dealing with the VRT management, but also with the 2,000 people that work here and with the whole community.” And she adds: “At a conference of European media trade unions, colleagues from Hungary and Poland warned us: the measures that the Flemish government is imposing today can lead to a State or propaganda channel.”

The intended action of December 5 at the VRT premises has already inspired the cultural sector that will join the mobilization, and could still engage other sectors of the Flemish civil society and workers who do not want the nationalistic austerity cocktail of Jambon and company.

The PTB-PVDA supports this appeal and will be present at the meeting.