How the Belgian workers blocked the pension with points

While the government in France faces a lot of resistance against its pension reform project, in Belgium they remember a similar project. Two years ago the government and employers tried to impose a pension with points. The workers succeeded to get them to back out. A brief look at this Belgian victory. 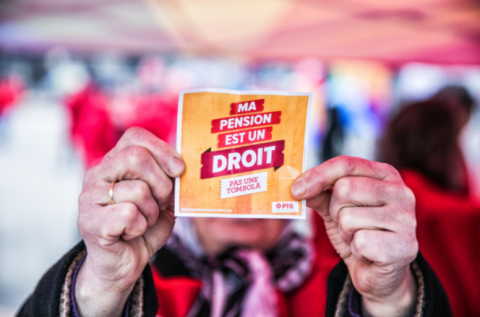 While the national government boasted its determination to go all the way in its reform – to impose what is called here a pension with points, “the the high point of all pension reforms of the government” according to the liberal Minister of Pensions Daniel Bacquelaine – he backed out as the workers marched in the streets...

A question of education

On 28th October 2017 the Minister of Pensions announces: “I’ll be introducing a bill on the pension with points before the end of the year.” Very quickly the country's three trade unions react and on 19th December a first joint demonstration is organized in Brussels. More than 40,000 people marche in the streets of the capital. The very same day of this large-scale action the minister takes his first steps back: he announces that in the end his text will be introduced in June. Another retreat in April, when he declares: “It is not entirely necessary to vote the texts before the end of the legislature. In the first place there is a need for an educational effort.” To be understood: the people would be wrong to mobilise against a reform that they don’t understand.

But the workers had very well understood that the pension with points system would change pensions into a tombola. It’s actually a message that the trade unions and the PTB-PVDA (Workers' Party of Belgium) never stopped to remind. A tombola thus summarized by PTB MP and spokesperson Raoul Hedebouw, as soon as in December 2017: “They will give you points instead of euros. These points will be determined at the end of your career. But they will be variable depending on the State budget, the cost of living and life expectancy. Therefore if life expectancy increases, our pension will diminish. If there’s another crisis as in 2008, it will be again the pensioners who will pay, automatically. It’s tombola pension. »1

A tombola organised by the European Commission. Because the pension with points is certainly a “demand” coming from the European Union. Everywhere this system is imposed, the amounts of the pensions have diminished, the pivotal age has moved back. As in Germany, where the pensions have diminished by 10% compared to salaries. And where 2,7 million people over 65 years old live under the poverty threshold. Or as in Sweden, where the workers have to work till 68,5 years to receive the amount which they had before the reform, at 65 years of age.

This system with points favours private insurance: as the pensions are lower and the workers know only shortly before their retirement the amount of this pension, they are more inclined to take out an individual insurance to overcome bad surprises. With the end of the distribution system, goodbye to interprofessional and intergenerational solidarity. Goodbye to the collective demands. Hello to the privatization of the pensions.

Thanks to the awareness campaign from the trade unions and the PTB-PVDA, the manoeuvres of the government in order to put up a smoke screen for the workers failed.

Mobilisation of the street

Convinced of the danger of the governments plans, more than 70,000 people take to the Brussels streets again on 16th May 2018, at a demonstration for the rejection of the pension with points. A few days later, a predecessor of Daniel Bacquelaine and federal MP Vincent Van Quickenborne confirms on television what the workers already know: the government will not dare to impose the end of the distributive pension system by putting in place the points system during this legislature. “My impression is that it will not come anymore. And the minister confirmed it two weeks ago. Where does this come from? It’s a drastic overhaul of the system. Unfortunately there is insecurity and uncertainties (...) And, to be honest, we’re too close to the elections (the local elections were held in October 2018 and the elections on higher levels in May 2019) to be able to take a decision on this matter.”

But more than the political calculations of politicians, it’s really the mobilisation in the streets that made the liberal government back out.

The lessons of victory

The organisations that succeeded to block the reform have learned their lesson. In the first place the issue of pensions is one of those which angers the workers the most. Next, the popular pressure was expressed via a large movement that united the workers from all regions, in a common interprofessional trade union front, but also with citizens' initiatives and with the support of public opinion. As proof of this support, a survey published in June 2018 showed that the majority of the population wanted to take its retirement earlier and with a bigger amount. Three quarters of Belgian workers said they feared not having a decent pension.2

Another lesson: having a clear objective. The 70,000 people who protested in May 2018 did so by showing their firm refusal of the points system. No adjustments possible, it was no and just no. It’s this unity and this clarity with regards to the objective that lead the workers to victory. And which provides us with ideas to go further...

On our way for better pensions

Because such a victory leaves its traces. On the side of the losers – the parties in the federal government suffered a serious defeat – but mainly for the winners. The trade union organizations and the PTB-PVDA have gone over to the offensive: for a minimum pension of 1500 euros net per month. The campaign of the left party is now in full swing. The 100,000 citizens' signatures the party gathered in order to lay down a citizen bill of law (the first ever in the history of the country) to obtain this minimum pension is about to be tabled... A success that is partly explained by the signal sent in 2017-2018 : the workers can win against the government.