Interview with Francis Degrin, working class MP from the PTB-PVDA

Do you know any MPs who spend two days a week working on a production line in a factory? Meet Francis Dagrin, Brussels deputy of the PTB. 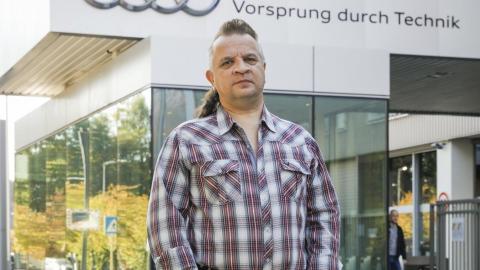 A member of Parliament who continues to work at the plant?

Francis Degrain. So, yes, I was elected as a member of Parliament in May. It's my first term. I come from a union background, a labour background. I was a shop steward in a company for about 20 years. Yes, I was a worker, but I'm still a worker. Two days a week, I continue to work at the plant, in an automobile assembly plant.

For me, it's very important to keep this contact with the base, with workers. I function there like a sponge. What I hear, I take back to Parliament.

Does that mean you didn't want to cut off the contact with the working world and that's how you see your mandate? Does that mean being a Brussels MP wasn't a full-time job? Wasn't that enough to keep you busy all week?

Francis Dagrin.  In order to function well as a parliamentarian, to keep our feet on the ground, to keep in touch with reality, two things are important. On the one hand, living on a worker's normal salary, which is the case for all the elected members of the PTB. And, on the other hand, keep listening to people. We have theorized this into a term which is "street, council, street". We listen to people on the street - in my case, in the factory. We report what we've heard to the council - in my case, the Brussels Parliament. And then we go back to the people and explain to them what happened there.

The last reactions I heard at the plant were the angry reactions to the government press release informing that there was going to be a mileage tax.

Why is the PTB against this system? Is it not a good idea to say that those who do not use their car do not pay tax until they use it?

Francis Dagrin. This morning, I was reading an e-mail from Nadia. I think she sent it to a lot of elected officials. She explains that she's a single mother of two kids. And she explains that two years ago she had to buy a new car, which she paid 7594 euros because Brussels had introduced the low emission zone and her old car no longer met the standards. She explains that she has to drive her children to school, that she needs her car and that she doesn't know how else to do it. I'd just like to read you her conclusion: "The government is not listening to us, so what do we have to do to get them to listen to us? Life is very expensive in Belgium, and every year, politicians put obstacles in our way. Please, help us, I beg you. I'm alone with two kids."

So you understand that, with this kind of testimony, we will continue to say that this tax is antisocial. Earlier, I explained to you that I had felt an angry outburst among the workers, my colleagues at the plant. So for us, it's very, very important to listen to what people are saying. There is opposition to this tax. We have launched a petition against this tax. We've already had 10,000 signatures in just over a week. There was a demonstration. That was a first. You can see it's important.

Francis Dagrin. Well, we're not pro car. We would like to see investment in alternatives to cars. And what do the workers tell us? They tell us they're not against not having a car anymore. It's not a problem. They tell us we need three things.

First of all, it must not be too expensive to use public transport. And here I am thinking particularly of public transport prices, but also of the cost of the parking lots next to the train stations. They are paying car parks, just like at the entrance to Brussels. It costs several euros a day.

On the other hand, they mustn't take too long. When you have eight hours of work a day, and it is not always easy work, plus travel time that could be extended by several hours if you take public transport in some situations today . We need public transport that is closer to the people, and more of it.

Thirdly, there is the comfort of public transport. It is not uncommon on our trams or trains, during rush hours, to travel standing up. This is inadmissible. In order for people to give up their cars, we need to invest in public transport. It's a priority.