"It's because of China." The extreme right and its scapegoat strategy

Inspired by Donald Trump, the far right around the world has adopted the same motto: "It's because of China that we have this coronavirus. China must pay." After an initial joint campaign against the UN pact on migration, the far-right network is now carrying out coordinated attacks against China. 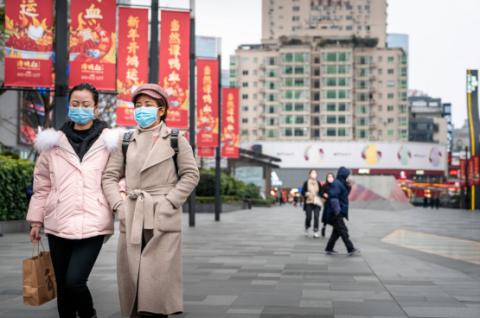 During the first phase of the coronavirus crisis, the extreme right had difficulty positioning itself in relation to this health crisis. In France, Marine Le Pen fell by 3 % in the polls at the start of the crisis. In Italy, Matteo Salvini, who was responsible for many austerity measures in the previous government, saw his popularity fall by 10 %.

In recent weeks, however, the far right has found a new common narrative. "It's because of China that we have this coronavirus. China must pay." In Belgium, the fascist Vlaams Belang party is also very clearly prepared to put the financial means to spread the 'anti-China' message in Flanders. Thus, the party did not hesitate to sponsor Facebook ads saying "Lest We Forget, Lest We Forgive: China lied about the virus", and "Let's stop being dependent on China". This sudden interest in China is part of an international far-right campaign, that is also taking place in Europe, at the instigation of Donald Trump. After an initial joint campaign against the UN pact on migration (known as the "Marrakesh pact"), the far-right network is now carrying out coordinated attacks against China.

The most immediate objective of Trump's campaign against China is to win the elections. Indeed, the US President's disastrous reaction to the coronavirus crisis cost him dearly in terms of credibility. Because of its slowness in implementing World Health Organization (WHO) guidelines, the country has paid a heavy price for the virus, with over 100,000 deaths and mile-long queues at food distribution points. He is also facing increasing social protest. An official document describes the (re)election strategy of Trump and the Republican Party as follows: "Don't defend Trump. Criticize China instead." Marie-Cécile Naves, research director at the Institute for International and Strategic Relations (IRIS), summarizes the situation in the Belgian daily Le Soir: "For Donald Trump criticizing the WHO's management of Covid-19 and accusing the organization of making a deal with China is to say that the WHO and China are responsible for the crisis. He is looking for scapegoats to silence criticism of his own disastrous approach to the pandemic."

This propaganda war gives pride of place to fake news and other conspiracy theories. Dozens of authoritative studies by virologists, biologists, the WHO and even Trump's own security services have already refuted the claim that the virus was created in a laboratory. Yet the White House occupant keeps coming back with these theories, supported in this by an international far-right network. All over the world, far-right politicians are repeating the same motto : it's China's fault. In Brazil, a minister in the Bolsonaro government even went so far as to claim that the coronavirus was part of a Chinese plan for world domination.

Protecting American multinationals at all costs

In the medium term, this campaign against China aims to protect multinationals and shareholders during the worst economic crisis since 1929. It's becoming more and more obvious that not everyone is in the same boat. The richest 1% is not "as hard hit by the crisis" as Theo Francken of the N-VA (New Flemish Alliance, right nationalist) claims. Billionaires are the only group in society to grow collectively wealthy despite this crisis... or rather because of it.

Trump's aid plan has freed up over $4 trillion to bail out big business first and foremost. However, growing social protest in the United States is becoming increasingly critical of this cheque offered to multinationals. There are increasing calls for a rescue plan for workers and, in both Europe and the United States, the idea of having multimillionaires contribute through a 'Corona Tax' is gaining ground.

In order to achieve his aims, he is considering further increasing the customs duties on Chinese products. Thus, this anti-China campaign fits in perfectly with the trade war that Washington has been waging for some time now. The slogan ' Make America Great Again ' wants to teach American workers to hate China, instead of demanding explanations as to why Donald Trump was so slow to implement the WHO guidelines.

The right-wing populist German magazine Bild ran the headline "What China already owes us" and calculated that China should pay Germany 150 billion euros. The president of the Spanish far-right Vox party also wants China to pay for what the party, like Donald Trump, systematically calls the 'Wuhan virus'.

In Flanders, the extreme right-wing news website Doorbraak has cleverly translated 'Make China Pay' into 'China must pay for the coronavirus crisis'. Doorbraak even advocates a 'Corona tax' on goods made in China and not on multimillionaires. Vlaams Belang has actively contributed to the dissemination of this article. With this campaign against China, the far right wants to protect the ultra-rich, as was very clearly demonstrated by the behaviour of Vlaams Belang in Parliament, when they voted against a proposal to subject multimillionaires to a Corona tax.

The campaign against China also has a strategic objective. It's about preparing the minds for a cold war against America's 'strategic' enemy. For twenty years now, the most reactionary and aggressive forces in the US establishment have been convinced that the United States must fight China to maintain its global hegemony.

The first anti-Chinese strategies were developed under the presidency of George W. Bush by the think tank Project for the New American Century (PNAC). One of the ideologues of the time was Samuel Huntington, author of the 'Clash of Civilizations', a book that was used to justify wars in the Middle East. Huntington claimed that these wars were not meant to control oil or raw materials. He argued that conflicts were inevitable because Western civilization was incompatible with Muslim civilization. What is less well known is that he considered a conflict with China just as inevitable, since Chinese civilization, based on Confucianism (named after the philosopher Confucius), had different values and norms from those of Western civilization.

Barack Obama, for his part, has put forward the 'Pivot to Asia' strategy, shifting American attention from the Middle East to the Far East and now assumed by the 'Committee on the Present Danger: China' (CPDC). It brings together former CIA officials, former military leaders, representatives of the arms industry, NGOs, international allies, conservative journalists and media experts, including Steve Bannon, Trump's former far-right consultant, who was behind the creation of the committee.

According to the CPDC, China poses a military, economic and ideological threat to the United States that must be fought. To find the shock troops that will lead the fight on the ground, the committee can count on the far-right network that Bannon is setting up. The man always applies the same tactics. Right-wing extremist campaigns on social networks are paving the way. Then, relatively respectable but extreme right-wing media and opinion-makers take up the story, or at least raise the issue and start a controversy, which is eventually picked up by the mainstream media.

This far-right anti-Chinese campaign is contributing to a rapid increase in anti-Chinese racism around the world. In one week, more than 600 cases of physical and verbal abuse against people of Chinese origin were reported. These people were invected, beaten, stabbed or otherwise molested. In some schools, Chinese students have even been denied access to classrooms. Since January, the number of Americans who see China as an enemy has tripled. In Europe, too, the extreme right is portraying China as an enemy. For example, in Spain, members of the far-right Vox party have spread racist messages against Chinese citizens and tourists in Spain. In Belgium, Vlaams Belang recently tabled resolutions in Parliament questioning China's membership of international institutions such as the WHO.