200 fewer jobs in Belgium: Ryanair does not stop at smashing prices

In September, the company announced that about 100 jobs were threatened in Belgium. The unions have just learned during a video conference that this figure is doubled ...
The aviation sector has been badly affected by the coronavirus crisis. Big aviation multinationals have been getting in each other's way in search of help from a number of states. That's quite ironic. When all goes well, they pay out astronomical dividends to their shareholders. When things go wrong, they make their workers pay and expect the community to pay the piper. In Germany, Lufthansa will thus be granted 12 billion euros of public money to survive, while the company has earned 9 billion of profit over the past 5 years. 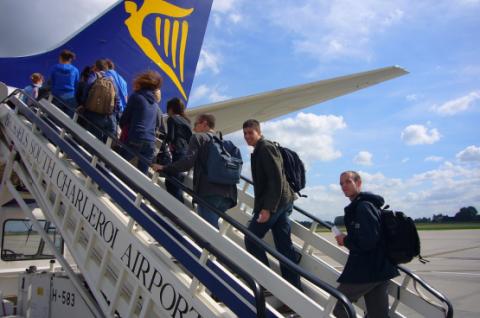 In the current climate, many people have been surprised to see Ryanair offer plane tickets priced at 5 euros. This offer made it cheaper to go from Charleroi to Zaventem by plane than by train.

Ryanair's boss, the Irish billionaire Michael O'Leary, has been claiming over and over again that he does not need States. He went so far as to criticize companies that ask for help: "Rather than treating all airlines equally, governments massively subsidise state aid addicts such as Lufthansa and Air France." O'Leary is even threatening to institute legal proceedings against such aids in the name of free competition. The reality is, however, that while not being granted aid in cash, Ryanair is supported by the public authorities in various ways.

The Ryanair model: keeping alive through the injection of public money

The low-cost company is very active in regional airports. In Belgium, Ryanair first expanded from Charleroi. Right from its arrival at the Charleroi airport in the early 2000s, it was awarded significant favours by a PS-MR-Ecolo government led by socialist Jean-Claude Van Cauwenberghe.

Favours first granted by the airport authorities. The Brussel- South-Charleroi Airport (BSCA) paid half of Ryanair's promotion costs for 5 years. To this end, BSCA and Ryanair founded the Promocy company. To put it in concrete terms, whenever a marketing operation offered tickets at discounted prices, the difference between these discounted fares and normal fares was paid by Promocy. Ryanair and BSCA provided a contribution of 4 euros per passenger to Promocy. This arrangement remained in effect from 2001 to 2006, and cost the Charleroi airport more than 7 million euros.

The airport also bore the costs associated with Ryanair's installation. Among others, 160,000 euros for a route, 768,000 euros to finance the recruitment and training of pilots and crews assigned to new destinations, 250,000 euros for hotel expenses.

BSCA has granted Ryanair a tariff for baggage management that defies any competition: 1 euro per passenger (the average tariff for this service lies between 8 and 13 euros per passenger). The Carolo airport itself confirms: this tariff does not cover the costs. From 2001 to 2003 alone, Ryanair received a total amount of more than 21 million euros in benefits from the Charleroi airport, which means from the taxpayer, since the airport is majority-owned by the Walloon Region.

Further aid packages granted to Ryanair by the Region

Not only did the airport put up money, the Region did as well. It undertook to compensate Ryanair in case an amendment to the Regional Law resulted in a decrease in profits. If, for instance, the Walloon Region was to decide to change the opening hours of airports (to limit noise pollution, for example), it would have to compensate Ryanair for the losses this measure would incur.

Another tariff reduction granted by the Walloon Region to Ryanair concerns the landing fee, the tax to be paid for each aircraft landing on Walloon soil. The level of this tax is determined by the Walloon government itself. In Zaventem, the fee per passenger is 28 euros. In Charleroi, Ryanair pays 1 euro per passenger. This is much lower than the actual cost that is therefore borne by the community.

In total, several tens of millions of euros were granted to Ryanair between 2001 and 2016. Whether the aids came from the airport or the Region, they were financed with money from the Walloons.

Such assistance also creates unfair competition. As Ryanair does not pay for services rendered at Charleroi, tickets can be sold cheaper there. As a result, other companies are enticed to lower their tariffs. Companies like Brussels Airlines are entering a downward spiral, cutting costs, putting pressure and even laying off staff.

A second strategy put in place by Ryanair in order to make profits is social dumping. Until 2018, when historic strikes took place in Europe, Ryanair's employment contracts were submitted to Irish law, which allowed the company to avoid paying Belgian social security contributions. On top of that, the company did not respect the Belgian minimum wage rule.

Union representation was also suppressed. A Ryanair worker in Charleroi was dismissed because she was distributing union leaflets.

Ryanair and the crisis: the shock strategy

Ryanair has not been spared by the crisis in the aviation sector. In May, Michael O'Leary announced that Ryanair's air traffic would decrease by 50 % over the next 12 months. Forecasts have since been revised downwards. Thanks to all the aid it is being granted, the Irish airline is in a position to propose extremely low fares. This is how it hopes to take advantage of its competitors' more serious difficulties and capture more market share as soon as recovery sets in. But that's not all.

Among other ways to reduce its costs, Ryanair is asking its board staff to reconsider the 2018 salary increases. In May, O'Leary announced job cuts of 3,000 workers in Europe. In Belgium, 80 redundancies were initially announced. The unions tried to negotiate with management: it responded by doubling the announced layoffs. Ryanair does not comply with the Renault procedure, in particular by not answering questions put by the unions, in spite of the fact that this is an obligation provided for in the mass redundancy procedure. (1)

Ryanair is also breaking the health rules. Michael O'Leary expects to fill his aircrafts to 70 % of their normal capacity, in order to "operate as close to break-even as possible".

An inspection revealed that Ryanair was not protecting its employees against the coronavirus. In Italy, the government threatened to take sanctions against Ryanair if it did not protect its workers.

Ryanair also seeks to take advantage of the crisis in order to negotiate further fundings. In April, several European airports, including Zaventem and BSCA, received a letter from Ryanair's management announcing that the company wanted to renegotiate its contracts. In this letter, the Irish airline was requesting the abolition of landing taxes and per-passenger charges until the end of October 2020, followed by tax reductions for the same services until October 2021. Solutions are sought on the Walloon government side. Airports Minister Jean-Luc Crucke is planning to inject between 50 million and 100 million euros to save BSCA. The risk is that this money could be used to finance new favours for Ryanair.

Toward a European public transport hub

Ryanair's cheap tickets are a sham. They actually come at a heavy cost to the company's workers, to the workers of other companies in the sector, to all the workers who are financing this disguised public assistance. They also make any alternative to polluting air transport impossible. Railway companies that respect social legislation cannot compete in the face of this unfair competition.

In his latest book They have forgotten us, PTB chairman Peter Mertens advocates the creation of a European public transport hub. This pole would be responsible for investing in the development of ecological public transport. Thousands of jobs could be created within this framework, thus allowing workers in sectors hard hit by the crisis, such as aviation or the automotive sector, to retrain and be redeployed. In short, the reverse of the Ryanair model.

(1) The Renault procedure requires the company planning a collective redundancy to organise a dialogue between management and the unions. The Belgian State set it up following the brutal closure of the Renault factory in Vilvoorde in 1997.