Attacks against their statute: Dockworkers won't let them get away with it

If it depends on the preliminary opinion of the European Court of Justice, there will soon be a very liberal judgment against the statute of Belgian dockers. The Major1 Act could become an empty box, and there would be less space for unions and more for temporary employment agencies. Such liberalisation of port labour opens the door to social dumping. This matter does not only concern (European) dockworkers, but all workers who want more social protection, trade unions who want to have an impact and all those who stand up for a more social Europe. 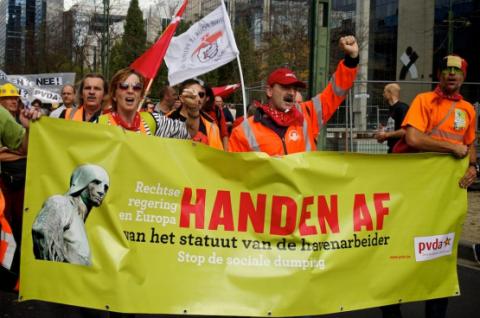 The Major1 Act, which protects the statute of port workers, is the fruit of a long social struggle waged by the workers in the 1960s and 1970s. Under the leadership of the Huts2 family and its company Katoennatie, a number of port companies have been waging war against the Major Act for many years. A CEO of a port company explains their motive: "Without the Major Law, our costs in the port of Antwerp would be a few million euros lower". And their generous profits undoubtedly a few million euros higher! Huts & Co. tried all kinds of tactics: Constant circumvention of the rules, a complaints procedure via the European Commission, lobbying via the friendly parties Open Vld (liberal) and N-VA (Flemish right nationalist), and taking the legal route. The militant dockworkers have so far been able to repel any attack.

The battle has now entered a new phase. Between 2014 and 2016, dockworkers stopped a complaints procedure of the European Commission by accepting a modest reform of the port statute. Huts and his ilk were very disappointed with the result. They initiated proceedings before the highest Belgian courts to have the reform annulled. In turn, the courts passed the hot potato on to the European Court of Justice. A very liberal ruling by the highest European court would be a bad thing for the future of our dockworkers.

In most cases, the ruling of the European Court follows a preliminary opinion, prepared by an Attorney General. He argues that the Belgian port statute is contrary to European rules. He attacks the dockworkers mainly on two points. Dock workers enjoy good social protection thanks to their pool system. A port employer must recruit recognised dockworkers from a pool and cannot, for example, use temporary employment agencies. Secondly, port unions organise the recognition procedure for dockworkers together with employers. For the Attorney General, these restrictions are too severe for the port companies. That is the big problem with the European liberal rules. The rights of big business always come first, not workers' rights to proper social protection.

If one excludes the trade unions and gives the temporary employment agencies free rein in the harbour, then recognised port labour, and thus the Major Act, becomes an empty box. Then the harbour becomes the social jungle it once was. Through years of struggle, the dockworkers won good social protection in exchange for their flexible deployment. The port remains a dangerous workplace with many serious industrial accidents. Our 9,000 dockworkers have to mourn a few fatal accidents at work every year. Without strong union control, this would only get worse.

Of course, a good statute and social protection not only concern the dockworkers, but all sectors where flexible working conditions are practised, where trade unions do not have the ability to enforce strict rules, where social dumping is constantly lurking around the corner. Think of the job insecurity of the airport workers of Zaventem or the murderous social competition for the transport workers and construction workers. They all yearn for more social protection in the form of a strong statute.

Twenty years ago, dockworkers were the first to block European liberalisation. They now face the new, difficult challenge of influencing the course of justice. But the dockworkers can win. Reality shows that judges are able to take account of social resistance and economic interests. Belgian ports occupy a key position in the European economy. The majority of goods for millions of European consumers and businesses pass through our ports. A similar case against the Spanish dockworkers proves that strikes and social resistance can determine the outcome of a legal case.

PTB-PVDA chairman Peter Mertens was the first politician to react to the new attack. He warns of the class justice that the dockworkers are in danger of becoming victims of: "There's an incredible gap between the liberal principles the Attorney General of the European Court applies to the Major Act and the reality on the ground. The port status proves in practice that it offers the best guarantee for social protection, safe working conditions and high productivity. We must stand shoulder to shoulder with our dockworkers. "

Peter Mertens also immediately submitted a motion to the Antwerp City Council to send a strong signal from the city of Antwerp for the preservation of the Major Act. The entire opposition voted in favour of the PTB-PVDA motion. On that occasion about a hundred dockworkers came to the city council to support the motion. This was another step in the long strugle on many fronts to safeguard the dockers' statute, their pool system and the trade union strength. 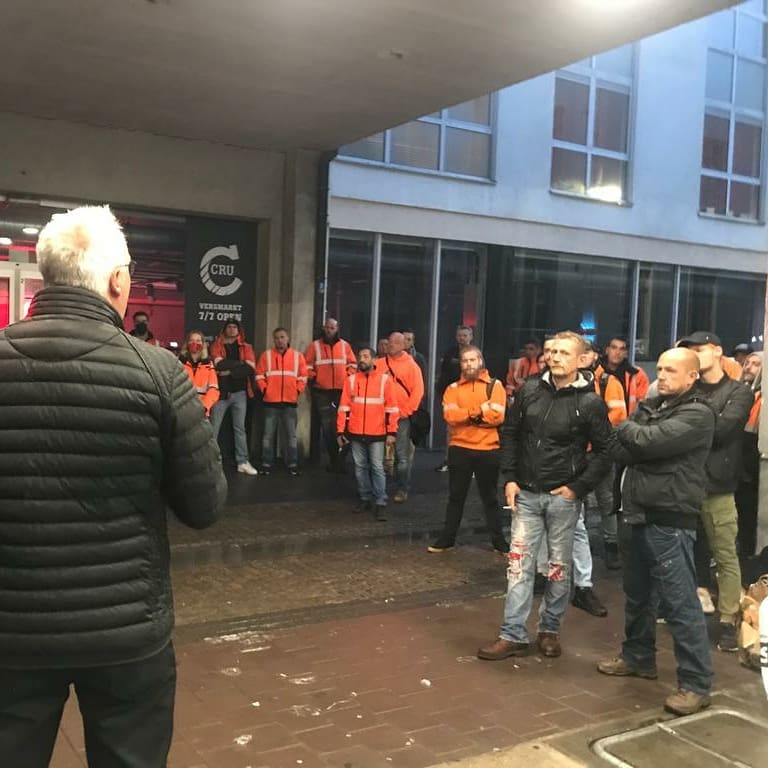 1 From 1968 to 1973, Louis Major was Belgian Minister of Labour and Social Affairs. As such, he drafted a law for dockworkers to give them a special status with better social security.

2 Ferdinand Huts is a Belgian billionaire and owner of the Antwerp company 'Katoennatie'.