“This is the same policy as the previous government”, reacted PTB-PVDA chariman Peter Mertens to the announcement of the Vivaldi government's agreement (a government composed of the 4 major political families, like the 4 seasons: liberals, social-democrats, Christian-democrats and greens). “The liberals are making their mark: there will be no tax on millionaires, the pension age remains at 67, despite all the promises, and wages remain frozen. That's not what people voted for.” The PTB-PVDA promises a strong leftist opposition, both in Parliament and in the streets. 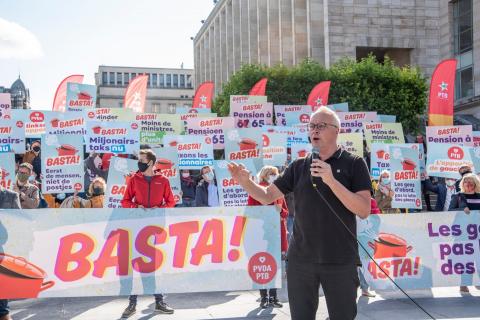 Peter Mertens sees in the programme of the government led by the liberal Alexander De Croo above all a great continuity with the liberal policy of the previous Michel government. “However, the left-wing parties had promised to introduce a wealth tax and to lower the pension age to 65. The Vivaldi coalition's ministers have not even been sworn in yet even as these election promises have already been tossed in the trashbin.”

For the PTB, the absence of a tax on millionaires is unacceptable: “The social inequality in our country is greater than ever. But the liberals win: there will be no tax on millionaires. Once again, it's the workers, those who keep society running, who will foot the bill. We won't accept it and we will fight hard to avoid it.”

The minimum pension of 1500 euros, the spearhead of the PTB in the electoral campaign, is included in the coalition agreement. “This is the result of four years of intense campaigning by the PTB”, Mertens said. “But much remains to be done. There are still major questions about the exact amount, timing and financing of the measure. In addition, two out of three people will not be eligible for the version proposed by the Vivaldi coalition, because they do not reach 45 years of career. We want 1,500 euros net, now and for everyone.”

“After almost 500 days of petty games and bad political theater, we find ourselves with the same liberal policy as the Michel government. The same policy that was sanctioned by the voters on May 26th 2019. Apparently, the traditional parties have still not understood this signal. The people did not vote for this”, deplores Peter Mertens. He concludes: “We promise one thing: we will lead a strong left-wing, social opposition, in the North, the Center and the South of the country. In Parliament, but also in the streets.”